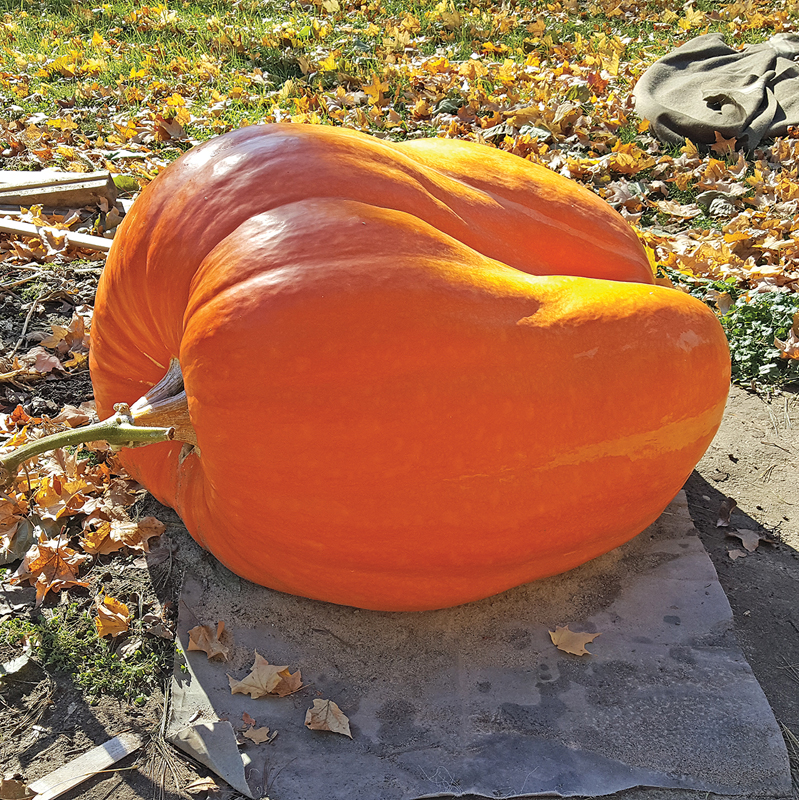 GREAT PUMPKIN — Bob Fehr of Colfax has donated this pumpkin for the Monster Bash II at the Colfax Municipal Building on Saturday, October 27. —photo submitted

COLFAX  —  Even if you have never raised a giant pumpkin, you can imagine how much time and effort would go into such a project.

Bob Fehr of Colfax raised a beauty of a pumpkin this year, and he is donating it for the Monster Bash II Halloween Party at the Colfax Municipal Building October 27.

“He is working on getting a weight for us, and we’ll do fifty cents a chance to guess the weight,” said Troy Knutson, events coordinator for the Colfax Municipal Building Restoration Group.

The pumpkin will be situated in Tower Park next to the Colfax Municipal Building between the two flowerbeds the morning of Saturday, October 27.

In addition to buying chances to guess the weight, people also will be able to make bids to purchase the big pumpkin.

All proceeds from the pumpkin will go toward the Colfax Municipal Building elevator fund.

The buyer “can use it for a yard ornament, for deer feed, a Jack-o-lantern or whatever else,” Knutson said, adding that Fehr is willing to deliver the pumpkin up to 10 miles.

Entry forms for the weight and/or to bid on the pumpkin will be available at Tower Park on Saturday, he said.

If anyone is interested in bidding on the pumpkin or guessing the weight but cannot be at Tower Park on Saturday, he or she can contact Knutson on Facebook or call him at 715-962-3027.

The successful bidder on the pumpkin will be announced after the 2 p.m. movie in the auditorium.

The Halloween Monster Bash II party begins Saturday at 1 p.m. at the Colfax Public Library and will feature treats, crafts, and games for kids.

At 1:45 p.m., a costume contest will be held in the historic Colfax Municipal Building’s Cozy Theatre upstairs.

Contestants will walk across the stage, and the audience will vote for their favorites.

At 2 p.m., the Halloween Monster Bash II continues with a Halloween movie for kids, “Paw Patrol: Halloween Heroes,” in the auditorium.

Admission to the movie is free.

Concessions will be available through the Colfax Commercial Club.

Votes for the costume contest will be tallied during the movie, and then prizes will be awarded after the movie.

At 7 p.m., another Halloween movie will be shown in the historic Cozy Theatre: “Goosebumps II — Haunted Halloween,” featuring the return of Jack Black.

Admission to the 7 p.m. movie also is free, and once again, concessions will be available through the Colfax Commercial Club.