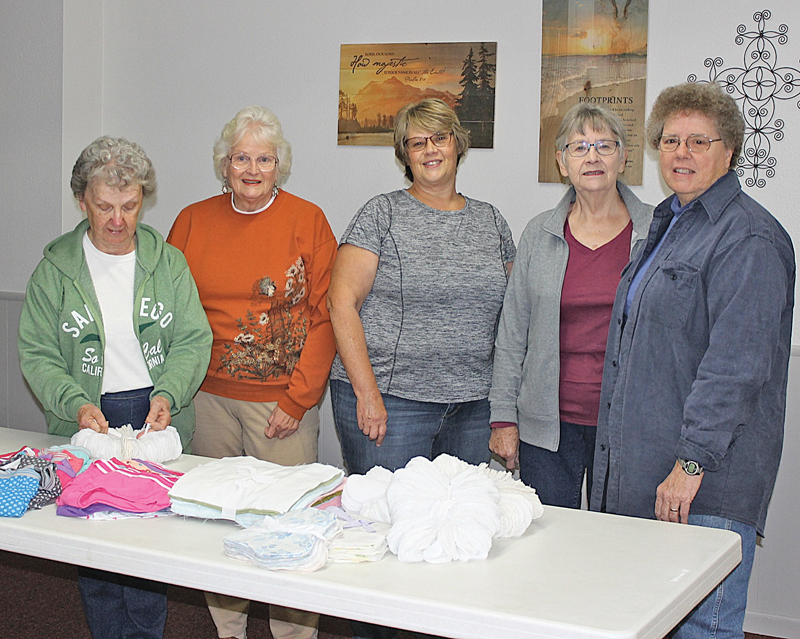 COLFAX  —  Three years ago, Geri Bates and Cindy Knutson, both of Colfax, attended a gathering of the United Methodist Women during which women were cutting out supplies for reusable maxi pads.

The supplies would be shipped to Kansas City, Kansas, to be assembled by Project Patricia, which sews cloth, washable, reusable maxi pads for women and girls in African countries.

Each woman and girl receives a kit containing five pads and a waterproof storage bag.

Having access to one of these kits keeps girls in Africa in school and keeps women on the job.

Project Patricia works with individual missionaries and mission groups to carry and distribute the kits. They also partner with Hands of Africa to distribute them.

Bates brought the information about Project Patricia and the patterns to her Popple Creek HCE group (Home and Community Education, formerly Extension Homemakers) of 11 women, who were eager to proceed with this project.

Securing fabric and material that can be used is one important part of the project. The materials needed included sheets, terry towels and mattress pads, much of which was generously donated by very gracious ladies in the community and the surrounding area.

The “big” expense was postage.

The last box of pads and panties were mailed out the second week of October, Bates said.

In the last three years, Popple Creek HCE has sent out enough cut-out supplies to make 6,200 pads and also sent more than 400 pairs of panties.  The supplies will make one hundred percent eco-friendly kits for 1,240 girls and women.

“We have received pictures of the missionaries handing out these kits. It was so heartwarming to see the young ladies’ expressions when receiving the kits. Smiles are the same the world over,” Bates said.

When the last box was sent, Popple Creek HCE received the following response from the coordinator of the project:

“We are sorry to hear this, but so very thankful for your partnership over the last three years. The numbers you have provided are amazing! I’m certain your work has had more far-reaching effects than any of us will ever know. I had so hoped to meet you one day, and that’s still my desire. Thank you so much for all of your hard work in leading the group and making a difference in so many lives. May God continue to bless all of you in a mighty way as you begin the next project of diapering precious babies. Godspeed, my friends.”

Popple Creek HCE’s next project will be making diapers out of T-shirts. The group hopes to find a local distribution point to send them to a third world country.

Members of Popple Creek HCE took great satisfaction and pride in meeting this basic need that so many in this country have taken for granted.

The service was appreciated by the women and girls of Africa, and that is HCE’s goal: spreading a little bit of love to those in need, and allowing them to keep the dignity that all human kind deserves.

Another mystery: What happened to the bronze plaque on the flagpole in downtown Colfax?

Colfax agrees to $15,400 for engineering fees in lieu of liquidated damages for Riverview Avenue