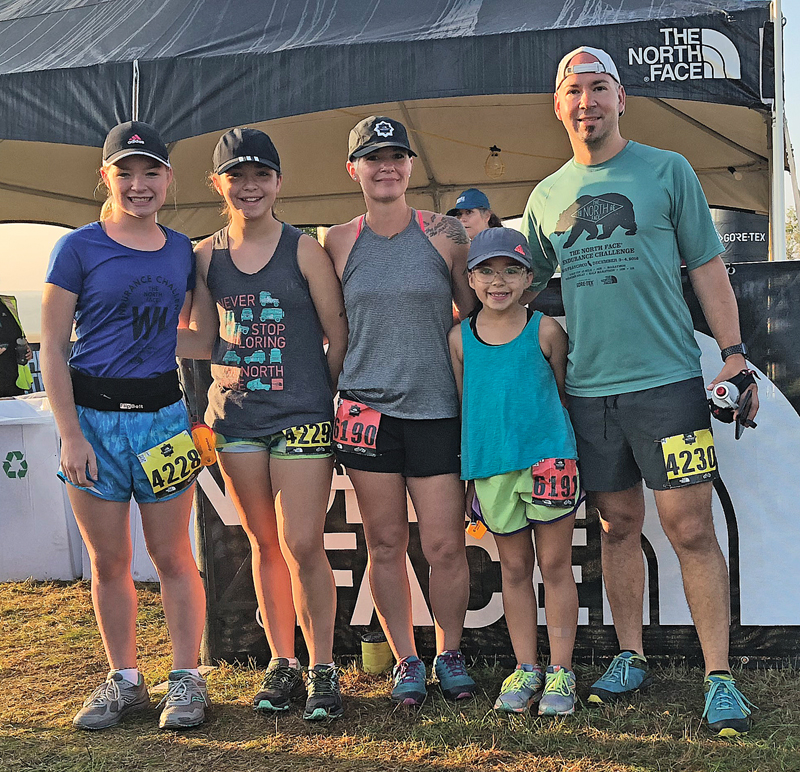 COLFAX  —  Maci Harvey and Meadow Keltner wanted to run a half marathon — 13 miles — by the time they were 13 years old.

Maci and Meadow are students at Colfax Middle School.

Rayna is a student at Colfax Elementary.

A large portion of the races are run on the Ice Age Trail southeast of Madison. The North Face Endurance Challenge includes a variety of races: 50 mile, 50K, marathon, marathon relay, half marathon, 10K, 5K and two kids’ runs.

“Knowing you can run this, and other kids can’t do it, that helps a lot too,” Meadow said.

“And crossing the finish is a great accomplishment. You feel a whole bunch of emotions when you’re finished,” Maci said.

“The girls last year, Maci finished first and Meadow finished second. And this year, it was swapped. Their times were exactly the same, though. They held hands and then jumped over the finish line together,” Scott Keltner said.

“This year I got first in my age category. Last year I got third,” Rayna said.

“Last year, she was the youngest one running,” Maci said.

“I got announced,” Rayna said.

In fact, the announcers made a “big deal” out of the fact that an eight year old was running the 5K and specifically pointed her out in the crowd of runners, Scott said.

The Keltners camped for the weekend. Their tent was set up about a half mile from the start of the race.

“It’s a nice relaxing weekend for us to get away. Kind of a mini vacation with a little bit of running involved,” Scott said.

“We kind of ran all over this summer. We went to St. Louis, and since we were in the middle of training, we ran in St. Louis. We stopped in the Dells on the way home and ran there,” he said.

When asked how they trained for a half marathon, Meadow said, “You kind of have to set your mind to to it, and go outside and do it. Even if you don’t want to, you have to push yourself to do it.”

“We will slowly get up to our mileage. We’ll have one or two long runs a week, and then we’ll have our short little ones in between,” Meadow said.

“We started talking about this race in January or February. We run in any weather conditions,” Scott said.

“We probably only run once or twice a week in the winter when it’s cold out. But then we get the actual training for about twelve weeks and we try to stick to that schedule,” he said.

“We had some hot days when even I didn’t want to be out there. But they pushed through it. We didn’t always want to do it, but we did it,” Scott said.

“Three miles would be our shortest. We go five and four too. Six is a tough one,” Meadow said.

“Above that, it’s our long hard runs,” she said.

Running is something the Keltners do together as a family and for fun, even if they are not training for a race.

One incentive for Maci and Meadow to run the half marathon was the chance to meet a runner who is famous among runners.

“They got their hats signed by him. It’s an incentive for them. He’s written many books, and he’s famous in the running world,” Scott said.

“We got a good chance to talk to him when nobody else was around. So the girls were able to ask him questions. ‘How do you do it?’ Fifty marathons in fifty days. He ran California to New York, straight through. With rest stops of course. He’s got all these experiences. So the girls asked him how he kept going, and what he told himself to keep going,” Scott said.

“He said, ‘mind over miles’ and ‘one step in front of another.’ He told them it was really cool they were into it, because a lot of kids their age won’t even attempt it,” he said.

“We have what we call Rayna Pace when we’re running. It’s not a lightning pace. It’s Rayna Pace. Then she gets into a race, and everything changes. I don’t know if she’s sandbagging the whole time we’re training or what,” Scott said.

“It’s like I get this little shock. It’s a real race. I’m not training. My body knows it’s a race, so it gives me a boost. But when I’m training, it doesn’t give me a boost, because it’s not anything big,” Rayna explained.

The nice thing about running a trail race is all of the people along the route.

“There are people all along the race, cheering you on,” Maci said.

“They’re cheering you on like you’re their best friend. Like we’re a whole family together,” Meadow said.

“That is the nice thing about running. You do it alone. You’re not a team. You’re not relying on somebody else. But you’re with a group of people,” Scott said.

“We’ve learned to rely on each other, but runners are generally a good group of people. Everybody cheers everybody on. I don’t know what it’s like in the top five or the top three. It’s a different world there. But where we’re at, it’s very supportive,” Scott said.

“Everybody is cheering these girls on. They’re some of the youngest ones out there running. The ones that they’re beating, I’m sure they’re not very excited that a ten-year-old beat them,” said Jaci, who came home from work part way through the interview.

“We had a talk with the girls to be sure they wanted to do it. We had to try to convince them how hard it was going to be,” Scott said.

“We were honest with them about what it was going to take and how much work it would be,” he said.

When the Keltners run at home, they often run County Highway N to the River Road and then into Colfax.

“It’s always the same path. It gets a little monotonous at times,” Scott said.

Running through town helps break up the monotony of the run, he said.

“The only thing that changes is the sky and the dead animals on the road,” Rayna said.

“Somebody will honk and wave, or we run to Cenex and get a Gatorade or a little treat, and then we run back home. That would be a common thing for us to do,” Scott said.

Benjamin Keltner, who is too young to be running races, rides the bike with them on their training runs and has gone as far as twelve miles.

“Then he came home and rode his scooter for three hours afterwards,” Jaci noted.

“It’s pretty incredible what he can do. Without complaints, usually,” she said.

Maci and Meadow said that at this point in their lives, the half marathon was the hardest physical thing they have ever done.

“You have to prepare yourself. Get yourself hydrated. And start running three miles … you’ve got to train, otherwise you’re going to be sore. And when that big day comes, you’re going to drop out in the first half mile if you don’t train,” Rayna said.

“She obviously listens to us,” Scott said with a laugh.

Now that the Keltner family is finished with the trail race for this year, it is a matter of volleyball practice and cross country and homework in the evenings.

“It’s been nice the last two years because the race was only a couple of weeks after school started. That way all of the heavy training could be done during the summer. I don’t know how we’d do it during the school year,” Scott said.

All three girls said they planned to keep running.

“I’m going to run the ten-k again. I’m not going to go to straight to half marathon,” Rayna said.

When asked if they would ever plan to run a marathon, “we are hoping to do that. But we’re not quite ready for it yet,” Meadow said.