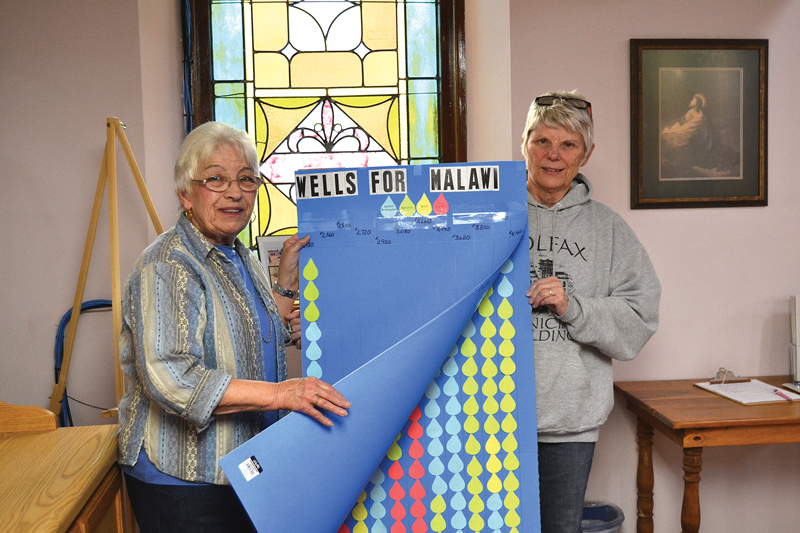 WELLS FOR MALAWI — Marge Hernandez, fund-raising chair for the Wells for Malawi project at Colfax Lutheran (on left) and Mona Thorson, president of the Colfax Lutheran Women of the ELCA, hold up the chart Hernandez made to show the progress of their fund-raising efforts. — Photo by LeAnn R. Ralph

COLFAX  —  If you had to carry water from a river or a stream or a pond or a lake, how far would you have to walk?

For the people who live in the Republic of Malawi in southeast Africa, procuring enough water for daily use can sometimes take up the whole day.

To help provide safe, clean water wells for the people in Malawi, Colfax Lutheran is collecting money for “Wells for Malawi” as the congregation’s participation in the current capital fund drive of the Northwest Synod of Wisconsin of the Evangelical Lutheran Church in America (ELCA).

Colfax Lutheran began the fund drive in March with a presentation during Sunday worship by fund-raising chairperson Marge Hernandez.

“Imagine this,” Hernandez began her presentation.

“Imagine this also. You don’t have water conveniently coming into your home, and you have to walk to the Red Cedar River or the creek running through town to get all the water you need on a daily basis. For those of you living in the country, where is the closest water to you? How far would you have to walk?” Hernandez asked.

“And what all is in the water in the river or creek? Can you imagine drinking it? Have you ever carried a bucket of water a long distance? For a lot of people in Africa, they don’t have to imagine the scenario I just described. That is the life they live,” Hernandez said in her presentation.

“The [church] council had set [a goal] of $2,000 or two years to collect the money. Well, we had already collected the two thousand by June. In my speech, I said, ‘how far can we go?’” Hernandez said.

To map the donations, Hernandez made a chart that is displayed at the back of the church.

Each “water drop” on the chart represents ten dollars donated.

One whole page is full on the chart, and Hernandez has started a second page.

The Colfax Lutheran women’s group also donated money, a total of $1,000, from the “Junk for Jesus” sale earlier this year.

Hernandez said she had not yet added those water drops to the chart.

When the second sheet on the chart is full, the amount will be $4,160.

The money can be used, too, for water filtration systems in the mountains where it is difficult to bring in well drilling equipment, Hernandez said.

The water can be taken out of streams and rivers, and then the filtration system filters out impurities in the water so it can be safely consumed, she said.

The gifts from Colfax Lutheran go to the synod office in Chetek. When the bishop in Malawi has finished organizing to build another well, he will let them know and the money is transferred to Malawi, Pastor Walck explained.

Granddaughters of the bishop of the Northwest Synod of Wisconsin, Robert Berg, started making little bracelets for five dollars each when they were in school for wells for Malawi.

“I forget what number they reached, but they raised about $20,000 over eight or nine years,” Pastor Walck said.

In addition to making a donation to the Wells for Malawi drive, the Colfax Lutheran Ladies’ Aid has been busy this year.

The start for Junk for Jesus came from Thrivent for advertising and other startup costs, noted Mona Thorson, president of the Colfax Lutheran Women of the ELCA.

In the past year, there were about a half dozen national initiatives that the Colfax Lutheran women gave to as well as seven or eight local causes, she said.

Last year, when the Plymouth church had a fire, the Colfax Lutheran women’s group made a donation and also donated for disaster relief at Chetek following the tornado, Thorson said.

Probably four or five people did about ninety percent of the setup for the Junk for Jesus sale, and 15 helped make soup; there were more than twenty who worked for several days all together setting up for the sale and working at the sale. There were two or three who helped pack it all up, she said.

The “leftovers” went to Goodwill, Hope Gospel Mission and Grace Episcopal in Menomonie.

“Nothing is wasted,” Thorson said.

The coats left over from the sale go to the “Coat Closet” and those types of places, Thorson said.

On October 21, Pastor Walck will be showing a short film about a well that was installed in Malawi quite a few years ago.

In the spring, Pastor Walck showed a film about how the wells impact a community, and in the film he plans to show, a man had gone back to check on one of the first wells that had been installed.

“And lo and behold, sixteen years later, and it was still working. It needed some maintenance and upkeep over the years, but it was still producing water,” Pastor Walck said.

“Sometimes, to get water in some villages, it is a three-hour trip walking. To do that twice a day, it takes up six hours. And if they had a well handy, they wouldn’t have to do that. Generally it’s the women and girls responsible for getting water. So the little girls are not able to go to school. But if there is a well right there in the village, then the girls can get educated as well,” Pastor Walck said.

“Women with babies on their back. Then they have to carry a bucket of water on their head. We don’t realize how easy we have it,” Hernandez said.

Any group that would want to fund raise, such as a youth group or 4-H group or a club, could hold a bake sale for Wells for Malawi or a thrift sale or put out a donation can, Hernandez said.

Individuals can also donate toward the initiative as well.

Hernandez said she realizes many different organizations are in need of cash donations.

“It seems like everybody in the country wants our money. I don’t even answer my phone if I don’t recognize the number,” she said.

Still, any donations toward Wells for Malawi would be appreciated, Hernandez said.

“I’m hoping to fill this chart,” she said.

Anyone who would like to attend the October 21 service to see the short film on the wells, “they are welcome to come,” Hernandez said.

“And anybody who wants to donate can send it to Colfax Lutheran Church and designate it for Wells for Malawi,” she said.

Colfax Womens Club collect donations for the Bridge to Hope