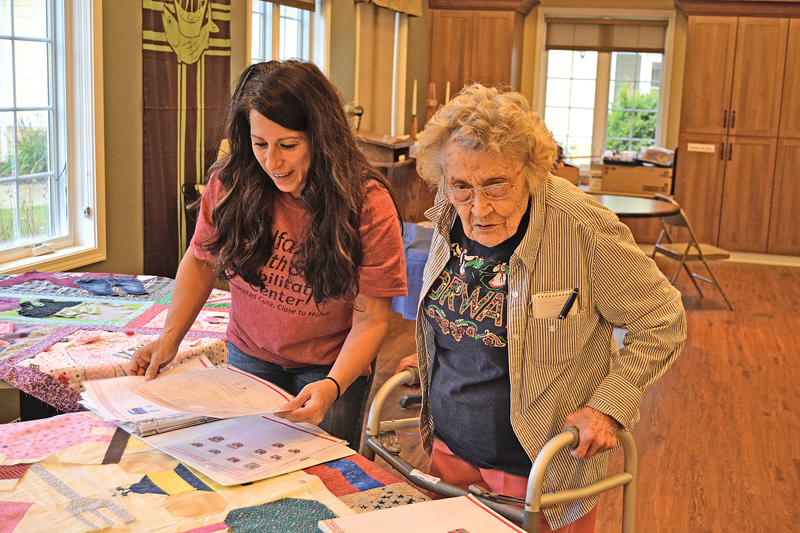 CHRC QUILTERS — Angela Rebak, on left, has started a quilting group at the Colfax Health and Rehabilitation Center that meets on Monday afternoons. CHRC resident Vergene Viets stopped by to see the quilting projects Rebak has been working on. —photo by LeAnn R. Ralph

COLFAX  —  For Angela Rebak, quilting is a passion.

For the women who live at the Colfax Health and Rehabilitation Center, their weekly quilting group is a way to remember times past and an opportunity to look forward.

Rebak is a hair dresser who comes to CHRC every Monday. Her weekly contact with the residents inspired her to start the quilting group that meets every Monday.

“There are so many gals along the way since I’ve been here — I started in January — that either had sewing machines in their room, or wish they could still sew, so I figured, why not start something where they could get the time. I bring all of my own stuff in. Sewing machines, scissors, rulers, mats. I bring it all in,” she said.

There are usually three to seven quilters who join the group in The Square at CHRC.

“This is only our fourth week. It’s all new,” Rebak said.

“I do hair, and then from three o’clock until five, I’m in here,” she said.

The quilting group is currently working on making items for a bazaar being planned at CHRC in November.

Items made by the group also will be offered for sale during the CHRC wine tasting event in January.

“We are planning to do some smaller quilts (for January), like baby quilts. I can take those home and machine them myself,” Rebak said.

Rebak is part of a quilting group in Birchwood.

“We still do retreats, and they donated a lot of the fabric that we’ve got. Four or five ladies donated boxes and boxes of fabric, so we’re set for fabric,” she said.

What would be helpful, however, would be more projects like snowmen and stuffed animal kits.

“After we get done with those, we will start working on some potholders,” Rebak said.

The group also is working on a red, white and blue “Quilt of Valor.”

“We are going to try to get three of them done. All of the fabric was donated by a national quilter. I’m part of a national quilt group, too, and we had donations from there also,” Rebak said.

The Quilts of Valor will be presented to veterans at the nursing home. A friend of Rebak’s who owns a “long arm” machine quilter will finish the quilts when they are ready.

Rebak brings in projects she is working on as well.

“A lot of them like to come down just to check it out and see what I’m working on,” Rebak said.

“Some of those who cannot quilt anymore like to just come down and watch,” she said.

One of the projects Rebak is working on now that she brought in for the CHRC residents to see is a quilt made from a bag of clothing belonging to a toddler just turning one year old.

Some of the quilters who attend the group take projects back to their rooms to work on during the week until the next quilting session.

“So many times I’ve heard that when I’m doing hair and when I bring in projects for them to see, ‘I sure do miss quilting.’ So I thought, ‘you know what, I’m going to donate my time and get something started,’” Rebak said.

The quilting group sounds like a lot of work for Rebak since she brings all of the supplies and the equipment needed to quilt every week.

“I enjoy it. I love it. I miss my quilt group. I would go every Sunday (for the quilt group in Birchwood). I still do the retreats. I love seeing all of the ladies,” she said.

Rebak owns a beauty shop in Birchwood, which she is planning to close next May.

“After that, I’m hoping to be able to do this a couple of days a week,” she said.

Several hours really is not quite enough time for the quilters, she noted.

“They get going, and then, oh, it’s time for dinner. I tell them if they want to stay later, I will stay later,” Rebak said.

Rebak said having more of the “panel” fabrics with the dolls or snowmen or stuffed animals, which can be cut out and then sewn together, would be helpful for the group.

“The panels are easier for them to work on,” she said.

“The potholders — there are a whole bunch of those on one big panel. They can cut them out and then work on them. It’s easier than working on a big quilt, because then everyone is on the same level. It gives everyone an opportunity to come in and work with us,” Rebak explained.

“Anyone (from the community) is welcome to come and join us. If they want to sew, or if they just want to come and watch and get ideas or come in and ask questions, we’re here 3 to 5 every Monday,” she said.

Rebak is hoping to eventually gather enough equipment and supplies for the quilting group to have everything they need on-site so she does not have to haul everything into the facility every week.

“The biggest thing is scissors right now,” Rebak said, noting spring-loaded models seem to work better for hands that might not quite work the way they used to.

Mats and rulers also would be useful for the group.

The group does not have an ironing board, either.

And totes to store projects, equipment and supplies would be helpful as well.

In addition to bringing in all of the supplies and the equipment, Rebak has been paying for the supplies herself, such as batting or backing.

“We had to start somewhere,” she noted.

“Once they have the mats and the scissors and the rulers, it does not have to be purchased again. It will be here when they need it,” Rebak noted.

Or stop in and visit the quilting group — they are in The Square beginning at 3 p.m. every Monday afternoon.