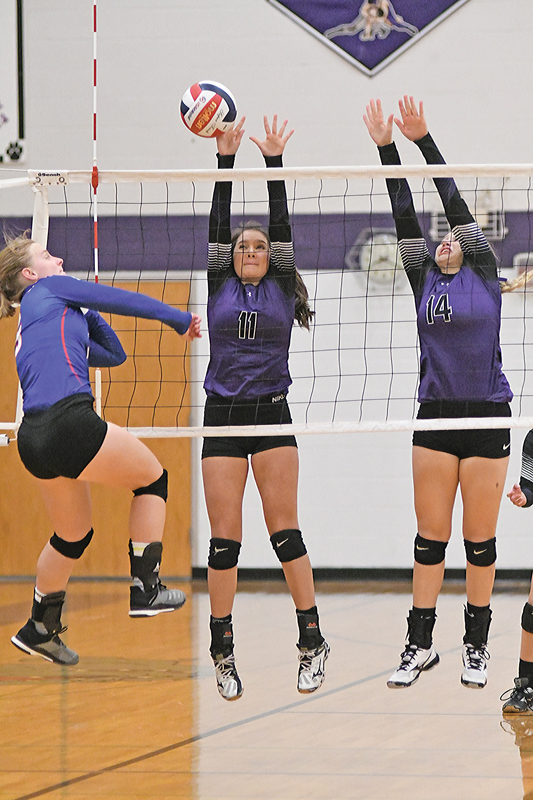 BLOCKED FOR A POINT — Boyceville’s Emma Ouellette (#11) and Kady Grambow (#14) attmepted to block a hit of a Mondovi player during volleyball action at the Dog House last Tuesday, October 2. Ouellette successfully block the shot which land inbounds on the Mondovi side of court for a Bulldogs’ point. —photo by Shawn DeWitt

BOYCEVILLE – The Lady Bulldogs’ volleyball team found the winning formula when they played host to the Mondovi Buffaloes last Tuesday.

Boyceville claimed its second Dunn-St. Croix victory of the season with a straight sets win over Mondovi. The Bulldogs, playing in its only match of the week, beat the Buffs in three sets by scores of 25-18, 25-13 and 25-18 in the October 2 match.

“It was great to finally play a match where we got the lead and kept it throughout the match,” explained head coach Keri Peterson.

Even with 11 serving errors against Mondovi, Boyceville found a way to serve up 11 aces. Kady Grambow led the way with five aces and Alyx Bloom contributed one ace.

Anna Evenson and Hannah Johnson had a great night of serving for the Lady Bulldogs, explained coach Peterson, with no errors from the service line.

“We are playing some of our best volleyball of the season,” stated Peterson, “we are working well together as a team and it’s fun to see.”

Jaida Peterson had a solid night against the Mondovi Buffaloes managing ten digs on defense, six kills and three aces.

“We served aggressively at Mondovi and we were able to get them out of system and force some hitting errors,” stated Peterson.

Boyceville had 25 total kills against Mondovi with Hannah Johnson leading the way with nine, Tyra Kostman contributed five and Alyx Bloom and Kady Grambow tacked on two kills a piece.

Emma Ouellette led Boyceville in assists with nine, Amber Retzloff tacked on five more and Hannah Johnson had one. Bloom and Grambow each had one assisted block and Tyra Kostman had one solo block. 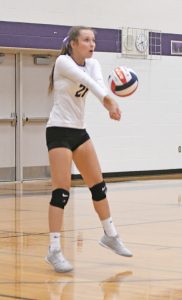 RECEIVING the ball is Boyceville junior libero (#21) Emma Bygd during a Dunn-St. Croix volleyball last Tuesday between the host Bulldogs and the Mondovi Buffaloes. —photo by Shawn DeWitt

The Lady Bulldogs, who improved to 2-4 in conference and 6-12 overall, traveled to Plum City last night (Tuesday, October 9) to take on the winless Blue Devils.

Boyceville will return home tomorrow, Thursday, October 11, to close out the 2018 regular and conference seasons by hosting the Durand Panthers.

Although neither an opponent nor location have yet been determined, the Bulldogs will open the WIAA Division 3 Volleyball tournament with a regional match next Tuesday, October 16.