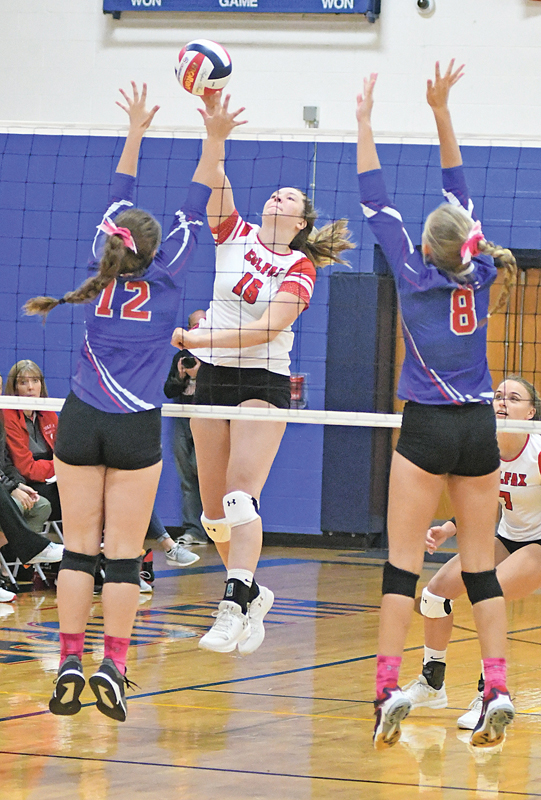 OVER THE BLOCK — Colfax junior Rachel Scharlau (#16) knocked the ball over the top of a block by Glenwood City’s Delaney Quinn in last Tuesday’s dunn-St. Croix volleyball match in Glenwood City. The Vikings swept the Hilltoppers in three sets to remain unbeaten in conference play. —photo by Shawn DeWitt

GLENWOOD CITY – The Lady Vikings’ volleyball took on Glenwood City and Mondovi this week and registered two wins to add to their unblemished Dunn-St. Croix conference record which improved to 6-0 this season.

With a lack of intensity during the matchup against Glenwood City last Tuesday, October 2, the Lady Vikings had to battle hard but were still able to put away the upstart Hilltoppers in third straight sets to earn the match victory.

The team returned home on Thursday, October 4 to host Mondovi, with Colfax earning another win in three sets.

Colfax traveled to Spring Valley Monday night, October 8 to make up a conference game that had been postponed due to the storm before concluding conference play against the Plum City Blue Devils at home this Thursday, October 9.

The Vikings will wrap up regular season play on Saturday at the Altoona Invitational. The WIAA Division 3 volleyball tournament begins next Tuesday, October 16. Although the brackets were not available at press time, Colfax will likely host in the regional matches. Colfax is also the host for the sectional final to be played on Saturday, October 27. 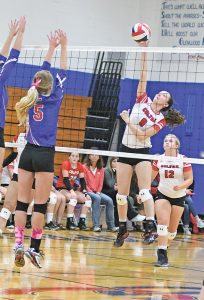 Even with a lack of intensity during their match against Glenwood City, the Lady Vikes walked away with another win in three by scores of 25-8, 25-14 and 25-22.

“Our goal is to be consistently competitive and play at our level no matter who is across the net,” explained head coach Pam Meredith, “at times, we lose sight of that so that will be our main focus in practice the next few weeks.”

Colfax had a 42.4 kill percentage against the Hilltoppers, managing only 36 during the game. Rachel Scharlau led the Vikings with nine kills, Kameri Meredith added seven more and Samantha Pretasky tacked on six of her own.

“It was nice to see our players take control of set one and win 25-8,” stated coach Meredith.

Jozie Buchanan added 18 assists to her high school career, as well as three serving aces and four digs for the Vikes team.

Leading the defense was Colfax libero, Alyssa Dachel, with 17 digs against the Hilltoppers and Taylor Irwin contributed 11 digs and 11 assists for the Vikings.

“As the match went on our intensity level dropped and that is something we need to focus on as we near the end of the conference season and start playoffs,” stated Meredith. 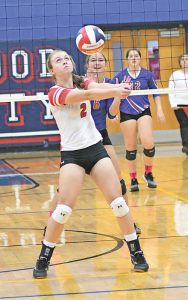 SETTING the volleyball for a teammate was Colfax junior Taylor Irwin during a Dunn-St. Croix match in Glenwood City on October 2. The Vikings swept the Hilltoppers and stayed unbeaten in conference play. —photo by Shawn DeWitt

Back in their home confines last Thursday, the Lady Vikings took on the Mondovi Buffaloes on October 4 and came away victorious with another three-set sweep that ran their conference record 6-0 and an overall record 20-5.

After Colfax jumped to 12-4 lead in the first set, the Buffaloes found a way to creep back up and tie the match at 19 all and then again at 22 all. The Vikings eventually took the win with three straight points, 25-22 and went on to take the next two sets and match by scores of 25-15 and 25-11.

“Point 23 was a tip kill from Taylor Irwin and Kameri Meredith finished off the last two points with service aces to win the first set,” stated coach Meredith.

Colfax libero, Alyssa Dachel, led from the service line with three aces against the Buffaloes and Rachel Scharlau and Kameri Meredith each served up 2 aces.

Samantha Pretasky had a solid night for the Vikings with nine total blocks three of which were solos, eight kills and nine digs.

However, leading the attack for Colfax were juniors Jozie Buchanan and Rachel Scharlau with nine a piece and Kameri Meredith put down eight kills of her own.

“Buchanan ended set two with a cross court smash that went untouched,” commented Meredith, “and Dachel started serving in set three and did not relinquish the serve until the Vikings had rattled off nine straight points.”

Alyssa Dachel took charge on defense with 17 digs against the Buffaloes, Kameri Meredith tacked on 12, and Taylor Irwin dug deep for seven.