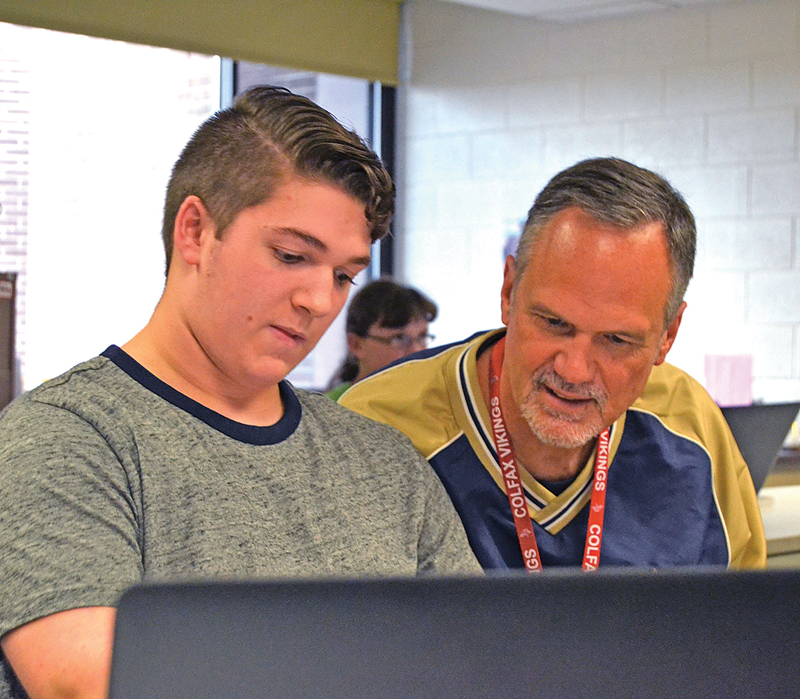 COLFAX  —  Tim Devine is wearing many hats these days in the Colfax school district.

“But wait,” you are thinking, “I thought Tim Devine retired last year.”

He did retire from his position as a middle school language arts teacher, but now he is back in the Colfax school district working as hard as ever.

Devine is the facilitator for Distance Learning classes that allow Colfax High School students to earn college credits while they are in high school, and he also mentors high school students taking online courses, GEDO No. 2 students working toward a Graduate Equivalent Diploma (GED), teaching remedial English classes to students who failed English and need to earn back credits to graduate, and working as a middle school interventionist to help struggling readers increase their literacy skills.

But Tim Devine did not want this story to be about him.

Devine wanted the story to be about the incredible educational opportunities available to students at Colfax High School.

“The Board of Education unanimously supported the Distance Learning program idea by purchasing the equipment needed, the Polycom, and by hiring Mr. Devine as the facilitator of this program with this being one of the several hats he is wearing,” said William C. Yingst Jr., district administrator.

“The real advantages to the Distance Learning is courses are being offered at an agreed upon discounted rate. The students don’t have to drive to Eau Claire or Menomonie for one class and miss other course offerings due to drive time. We are making an effort to offer courses the students want/need for post-secondary schools and that ultimately saves the students dollars by having earned up to 27 credits prior to entering a college or university,” he said.

“We have made a strong effort to allow our students the opportunity to stay competitive by earning college and transcripted credits. These courses have been very popular offerings and our classes are mostly full,” Yingst said.

“I’m not sure if it was Mr. Yingst or Mr. Dachel, but one of them wrote a grant and CESA 10 gave us the money to purchase the Polycom. We would not be able to offer this class without this piece of equipment,” Devine said.

The Polycom looks like a large television screen. During class time, students can see and hear their instructor, and they can also see and hear the other students in the classes at other high schools. 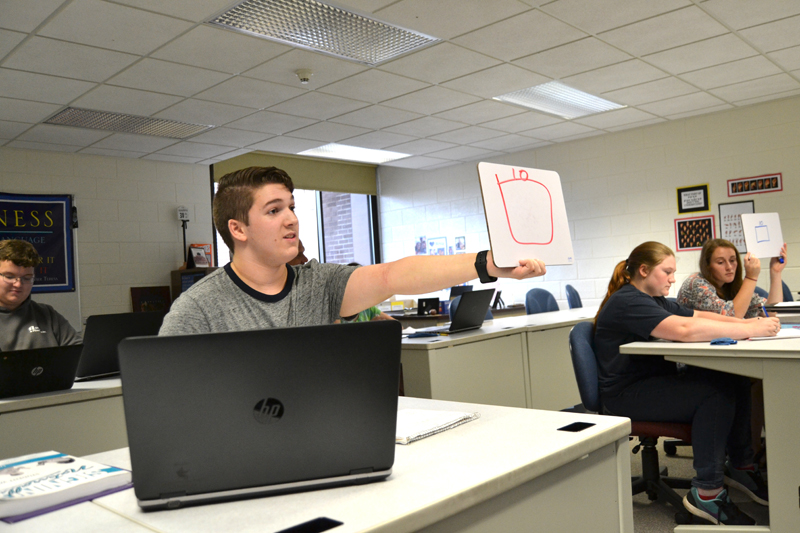 The students enrolled in the Distance Learning classes to earn college credits while they are in high school come to a classroom assigned for that purpose.

“I’m learning my new role as we go on, day by day. Basically, what I do is I’m wearing several hats now. Distance learning facilitator and coordinator. I have three sections of high school upper class-men, juniors and seniors, coming here for Introduction to Psychology, I have two sections of American Sign Language. After the psychology class is over with, they will take an Introduction to Sociology. In years past, we’d have six or eight kids sign up for these classes. This year, I have 25 in my psych class alone. That’s why we had to find a larger space other than the library,” Devine said.

The classes Devine facilitates are held in what is known as the “old” computer lab in the elementary school. Prior to the acquisition of laptops for all of the students, the students would have to go to a computer lab with desktop computers. Now, with laptops, the space is not needed for a computer lab.

“In addition to that, I have two classes of students who failed English, whether that be freshmen or sophomore. It will be for a semester, for a remedial program, so they can get that credit back and then graduate with a diploma,” Devine said.

“We also have a couple of kids who are doing alternate learning programs online that I monitor so they can get their GED,” he said.

“Then I also have a half dozen middle school kids who come in here during their RTI [Response to Intervention] time, so I’m helping them with their literacy skills. I also have some of Mrs. Zutter’s students in an overflow class so they have a place to go,” Devine said.

“I’m here eight hours a day, and I’m doing something a lot different than I did for 34 years. But I enjoy it,” he said.

“The reason I’m excited (the Messenger is doing a story), is I don’t think there are a lot of parents who understand the opportunities their kids have in the school district. Incidentally, the courses we’re taking are being taught in Wausau and NTC, Northcentral Technical College. The reason why we’re going there instead of CVTC is their schedule fits our schedule better,” Devine said.

“We also have the four instructors who were trained at CVTC to teach their classes here, so they get college credit for that. So some of these kids, if they take Distance Learning classes, and they take some of these transcript courses, they can graduate from high school with 30 college credits, and have a whole year of tuition paid for. They can go to college as maybe a sophomore,” he said.

“Another savings they have is if they take these classes, they don’t have to pay for textbooks. I know back when we went to college, textbooks are not as expensive as they are now. So that’s a big savings,” Devine said.

“The only thing they have to do is pass the class. If they don’t pass the class, then the family has to pick up the bill. The TC classes, the transcript courses, if they don’t get a C, they still get their high school credit for the class but they do not get the college credit,” he said.

“Our distance learning classes and our TC classes are weighted, so that means it will benefit their GPAs. We use a 12-point scale, which isn’t as common as the 4-point scale, but if a kid got an A+, instead of 12 points, the kid will get 15 points. So those three points can give your GPA a nice boost,” Devine said.

“There are a lot of perks. I think that makes us attractive to someone who is thinking about moving or if somebody is thinking about switching school districts. If people realize they can get some college credits while doing their high school classes, that’s a financial advantage,” he said.

“I don’t want to categorize kids, but these classes are not for everyone. These classes are for kids who are probably thinking about going on to college. However, our transcript classes follow in a lot of other areas. Mrs. Schaffner, our new ag teacher, teaches a horticulture class. Mrs. Zutter teaches different business classes. There is something for everyone. This is going to keep growing,” Devine said. 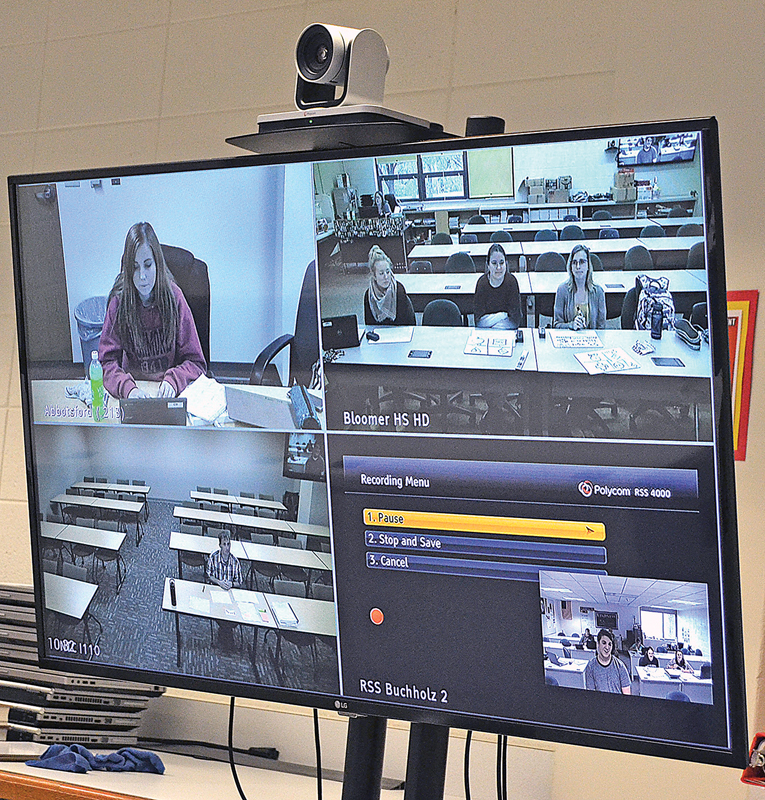 Having a classroom and a facilitator means the Colfax program does have room to grow.

“I think by having me, a full-time person in charge of the program, we can expand it. It used to be Mrs. Bowe had to oversee it or Mr. Dachel had to oversee it, and that takes away from their school counseling and their principal’s duties,” Devine said.

“Many of the larger schools have AP courses [Advanced Placement] but I think this is a better option. In the AP courses, after you take it, you have to pay for an exam, which is expensive, and if you don’t pass the exam, you don’t get the credits, so then you took that whole class for nothing. I’ve had some kids take those courses, and those tests are challenging,” Devine said.

“The sign language class I am finding really interesting. As I’m sitting at the back of the room, I’m kind of doing the same things the kids are learning,” Devine said.

“So the instructor is on the screen. And each of the students has a whiteboard and a marker. So either he is signing something, and they have to write it down, or they have to sign something to him, and he writes it down on his board what they just signed,” he explained.

To get an idea of how the classes work, the Colfax Messenger visited the American Sign Language class on September 20.

The five students in the class were incredibly engaged in the lessons being taught by the instructor. And even though they had only been in the class a few weeks at that point, they had already learned an impressive amount of sign language.

Other students in the class included three from Bloomer High School and one from Abbotsford.

For one of the activities, the students were instructed to make a sign or symbol and then, using American Sign Language, put words or numbers on top of the symbol, inside of it or underneath it. The other students, and the instructor, then interpreted what the Colfax students had signed.

When it was the instructor’s turn or the students from the other high schools, Colfax students interpreted what they had seen by writing it on a whiteboard with a marker and then holding it up in front of the camera on the Polycom.

Each high school was instructed to pick a team leader, and Colfax selected Hunter Larson.

The team leader’s job was to say something about their high school and where it is located.

During his introduction, Larson also noted students in Colfax were having their pictures taken by the newspaper that day.

“Both of the instructors I’m working with at NTC, well, they are in this business for a reason. They love kids. And my students are enjoying their humor and their different styles. It’s different than a typical high school class,” Devine said.

“Mrs. Bowe does a survey every year about the courses the kids are interested in, and then we contact CESA 10 and find out what they have in these areas. It doesn’t have to be Wausau or Eau Claire. It can be any technical college in the state,” Devine said.

A report by John Dachel, Colfax High School principal, during the Colfax Board of Education’s September meeting revealed that 224 students were signed up for the college credit classes offered at Colfax High School.

“They are all different careers. White collar. Blue collar. Photography. They can come in here and watch a live, 15-minute presentation about what it’s like to be a photographer or a nurse. And then we have another 15 minutes where we can have questions and answers. It’s nice to hear it from someone else. I don’t know anything about photography or nursing. It’s nice to have someone else who is doing the job. So this is a really nice piece of equipment to have,” Devine said, referring to the Polycom.

“We’re hoping to get some more money for another one. I have to share this one with Mrs. Neuburg. For the class she teaches, it’s actually kids from other high schools who are taking it as well,” he noted.