DURAND – According to head coach Pam Meredith the Colfax ladies volleyball team played a solid game to start their conference with a 1-0 record.

Coming from behind in set one were the Vikings were down 12-14 and went on to win the set 25-20, set two was another win with a score of 25-8 off a serving ace from Kali Risler and set three Colfax won off a serving error from the Panthers to win 25-14.

Finishing the game with a total of 29 kills and only five hitting errors the Vikings are proving once again why they are the five-time reigning D-SC volleyball champions.

Kameri Meredith led the way with eight kills for Colfax followed by both Samantha Pretasky and Rachel Scharlau contributing seven kills a piece.

Colfax’s libero Alyssa Dachel led the defense with 16 kills while Meredith and Pretasky served up three aces a piece and Jozie Buchanan racked up 19 assists.

“I thought Kali (Risler) did an excellent job coming off the bench and playing tough in set two and three, she had some great serves and played a confident back row,” stated coach Meredith.

The Vikings hosted the Boyceville Bulldogs at home last night, September 18. Colfax will begin a three-match road trip this Thursday with a visit to Spring Valley. The Vikings then head to Cameron for an invitational tournament on Saturday before wrapping up in Elk Mound next Tueday, September 25 for the big D-SC match against the rival Mounders. 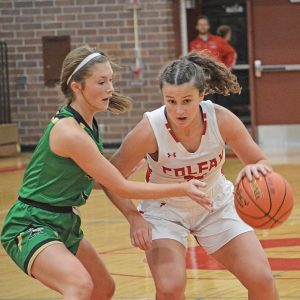