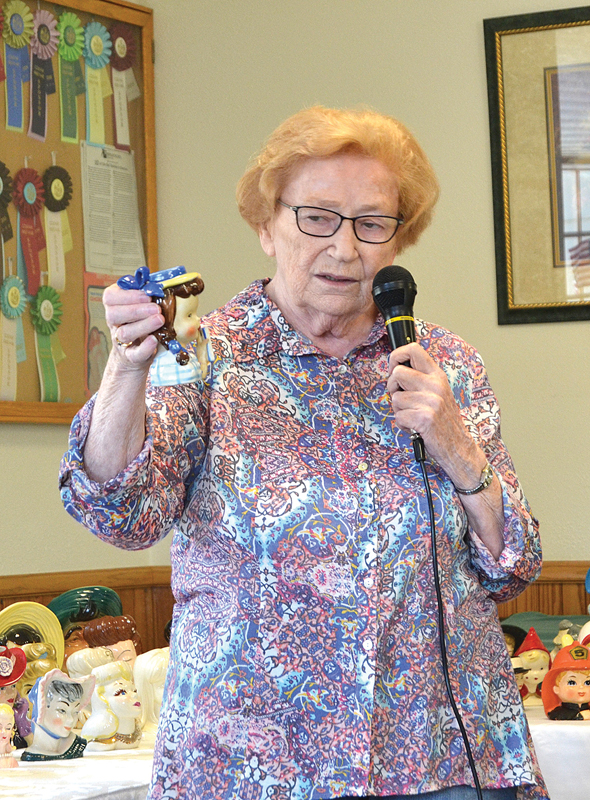 COLLECTOR — Joan Scharlau of Colfax collects head vases and brought her collection to the Grapevine Senior Center to do a presentation for the Merry Mixers on September 6. — Photo by LeAnn R. Ralph

COLFAX  —  The things you don’t learn about in this job.

What’s a head vase, you ask?

Head vases are what they sound like — a ceramic vase in the form of a person’s head.

Joan Scharlau of Colfax collects them.

Scharlau has about 70 head vases in her collection, and she brought them to the Merry Mixers meeting at the Grapevine Senior Center September 8 to do a presentation.

“The head vases were used by florists. That’s how they gave out their flower bouquets. They started in about 1940 and then in ‘50s and ‘60s. Then they started doing the specials, the cameo girls and the Barbies,” Scharlau said.

Scharlau has collected various items over the years.

“At one point it was dolls, then it was Roy Rogers. I have disbanded most of those things. Now it is head vases,” she said.

“I started collecting them quite a long time ago, when Del Hagen had a store in town. Well, he had many stores, but he had one store in the laundromat. And I think that’s where I got my first head vase. And that’s how I got started,” Scharlau said.

“I collected maybe 10 or so, and then I quit, unless I would see something that was in good shape and not very expensive, then I would pick it up,” she said.

“Then my sister, Carol, one year at Christmastime, bought me a vase. It has a funny story to it. The vase is listed as a Nippon. My nephew Michael and I were trying to check it out, because it was a little different than the Nippon we’ve seen,” Scharlau said.

“The eyebrows are not as thick, and neither are the eyelashes. There are a few little different things about it,” she said.

Her nephew checked out the head vase on the Internet.

“It turns out, this is a bogus Nippon. You would never think it. But it’s a bogus Nippon, even though it says ‘Nippon’ on the bottom,” Scharlau said.

After Scharlau received the head vase from her sister, she started shopping again for head vases.

The head vase she found at Hope Gospel Mission has a chip in the woman’s hat and something glued to the bottom so it would not scratch a table surface.

“Of course that has devalued it to almost nothing,” she said.

“If they are damaged or if they are faded, they are not worth more than a couple of dollars,” Scharlau noted

Scharlau has a Mickey Mouse and would love to have a Minnie if she could find one.

She also has madonnas and movie stars such as Joan Crawford, Lana Turner and Rita Hayworth.

She has a caricature of Prince  Charles and Princess Diana, too, of which only 300 were made. 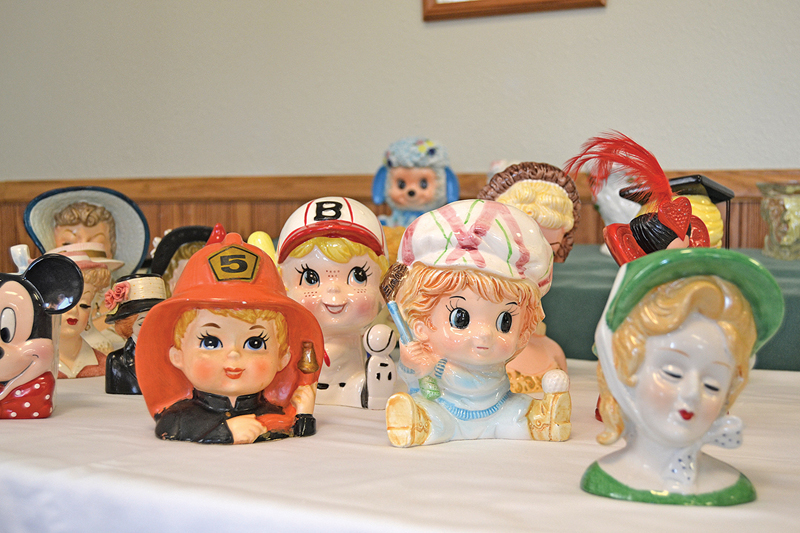 WHIMSICAL — The head vases in Joan Scharlau’s collection range from glamorous to whimsical. These are some of the more whimsical examples. Scharlau brought her collection to the Grapevine Senior Center September 6 for a presentation for the Merry Mixers. — Photo by LeAnn R. Ralph

Lana Turner was “very aggravating to me. I bought her on eBay and she was so pretty. I got her, and she’s filthy. And you can’t clean these. You have to use special cleaning methods. You can’t use water on them or all of the color comes off. Unless they’re glazed. The cowgirl is glazed,” Scharlau said.

Scharlau also has Lucille Ball, although she said she has never seen this particular head vase called Lucille Ball, until she found it on the Internet.

“She’s called Lucille Ball there so they can get more money for her,” she said.

And there is Little Red Riding Hood.

“The original Red Riding Hood looks much different. She’s rather grotesque and not very pretty. And I have three Barbies. The one in the red is the Bob Mackie Barbie. He designed for Barbara Streisand and Cher in different movies. The other is Graduation Barbie and Evening Splendor Barbie, like a prom girl,” she said.

Two additional Barbies Scharlau would like is a nurse and another prom girl-type of Barbie head vase. 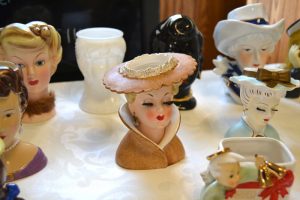 GLAMOROUS — The head vases in Joan Scharlau’s collection range from glamorous to whimsical. These are a few of the more glamorous examples. — Photo by LeAnn R. Ralph

There is a “cameo girl” head vase as well.

“The cameo girls they started making in 2000. They made 26 different vases, and they have retired 19 of them. But they have added, too, because at one time there was 64 of them,” Scharlau said.

Eloise is the “girl next door” of the cameo girls.

Some of the head vases were Avon candle holders, but they are showing up now on eBay as head vases, Scharlau said.

The yellow paint is mostly gone from one of Scharlau’s first acquisitions.

“I tried to clean her, and the yellow paint came off. It didn’t work. She’s what’s called a headache girl, and that’s why she has her hand up like that,” Scharlau said.

Regarding the glazing, Scharlau said she does not know why most of the head vases were not glazed, especially since they were used as vases for flowers that would require water to be put into them.

Vickie Hendricks, president of the Merry Mixers, said many pottery or porcelain pieces were not glazed years ago.

“I’ve had certain pieces I’ve tried to wash, and it hasn’t worked so well,” she noted. 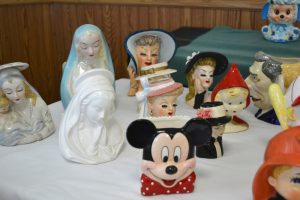 MICKEY MOUSE — This Mickey Mouse head vase is among the collection Joan Scharlau brought to the Grapevine Senior Center September 6 for a presentation for the Merry Mixers. Scharlau says she would love to have a Minnie Mouse, too, although she is still looking for one. — Photo by LeAnn R. Ralph

Colfax resident Susan Hill, who is a collector herself of various items and the curator of the Colfax History Room in the Colfax Municipal Building, wondered if Scharlau had ever actually seen any of the head vases with flowers in them.

“Some people, when they put them up on eBay, will put flowers in them,” Scharlau said.

Hill wondered, too, if Scharlau still had any of her Roy Rogers memorabilia.

“I have a Roy Rogers book and two Roy Rogers pictures. And I have my original doll, and then I have a little black doll with a white dress with little red hearts. My mother made the dress and the pants and the hat. I can’t give her up. I will have her forever,” Scharlau, noting she received her Roy Rogers doll when she was in eighth grade.