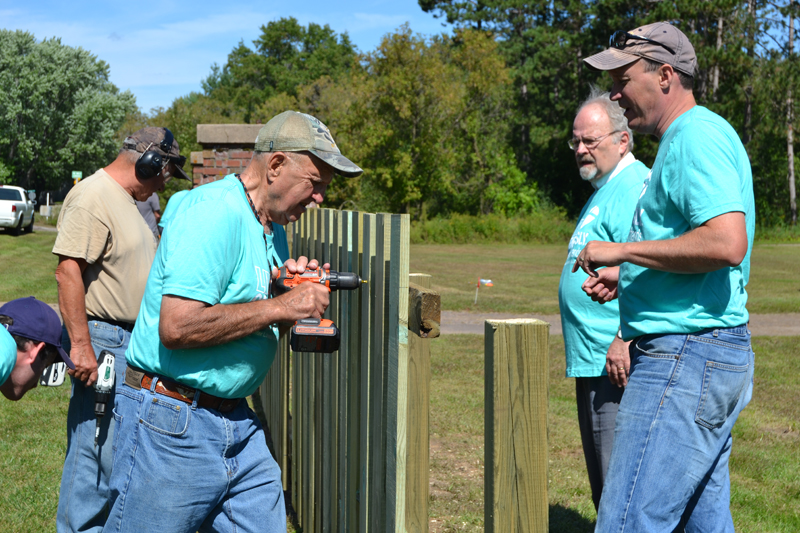 STILL WORKING — Gust Fehr, who says he is 86 years old, used a cordless drill Sunday, September 9, to install fence panels for the new fence at Evergreen Cemetery in Colfax. The new fence was a “God’s work. Our hands.” project by Colfax Lutheran Church. Fehr joked that he would be willing to have his picture published in the newspaper “so my kids can see I still know how to work.” Pastor Les Walck and Paul Verdon are pictured on the right. Dave Enger is on the other side of Gust Fehr. — Photo by LeAnn R. Ralph

A group of about 20 volunteers from Colfax Lutheran Church built and installed a new fence at Evergreen Cemetery in Colfax on Sunday, September 9, as part of the Evangelical Lutheran Church in America’s “God’s work. Our hands.” initiative on that day.

“At church council a few months back someone who regularly walks down here (on county Highway M by the cemetery) noticed the fence was in kind of bad shape. We mulled it over a little bit and said, ‘let’s check it out.’ We found out the village already had money set aside,” said the Rev. Dr. Leslie Walck, pastor at Colfax Lutheran.

“Paul (Verdon) got in touch with them. And with ‘God’s work. Our hands.’, this Sunday is one Sunday the church suggests nationwide for people to be doing community projects,” he said.

According to the ELCA website, “this day is an opportunity to celebrate who we are as the Evangelical Lutheran Church in America — one church, freed in Christ to serve and love our neighbor.”

“We were able to work it and plan for this Sunday (on September 9). We applied for Thrivent matching funds for the costs that would go along with it. The materials were covered, but there were other costs, too,” Pastor Walck said.

Over the past 10 years, members of the Colfax Village Board and village board’s parks committee, under different leadership and membership, have discussed building a new fence at Evergreen Cemetery.

With a plethora of special projects and a slew of regular work requiring attention around the village, and considering the limited resources and the manpower available, the cemetery fence was one of those projects that ended up being put off. Several times. 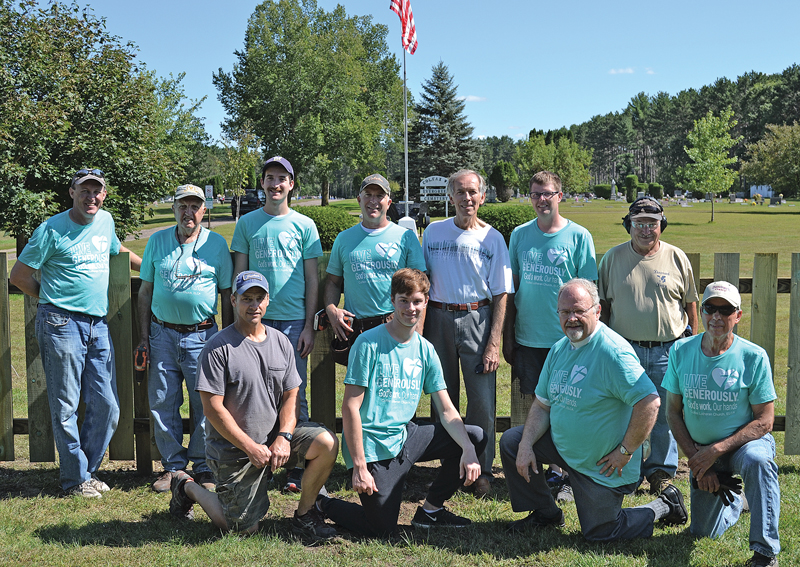 GOD’S WORK. OUR HANDS. — A group of volunteers from Colfax Lutheran Church worked on rebuilding the fence at Evergreen Cemetery September 9. About 20 volunteers worked on the project all together, although not all of them came out to the cemetery to help install the fence panels. First row from left: Joel Steinke, Edward Doerr, Pastor Les Walck, Dennis Kragness. Second row from left: Kerry Christensen, Gust Fehr, Joe Verdon, Paul Verdon, Steve Olson, Troy Knutson and Dave Enger. — Photo by LeAnn R. Ralph

“The village has made extreme progress in 2018 with very generous people and groups who have helped accomplish some of the smaller projects that when tackled with a small group of people can make the project happen very quickly,” said Lynn Niggemann, village administrator-clerk-treasurer.

“We are very grateful for the work of ‘God’s work. Our hands.’ to assist the village in crossing off one more item that has been long overdue,” she said.

Volunteers from Colfax Lutheran built the fence in sections in the courtyard at Colfax Lutheran and then hauled the sections down to Evergreen Cemetery where the posts had already been set into the ground.

The volunteers finished tamping in the posts, and then they hung the sections of fence.

Although there were quite a few hours of preparation work — rounding up tools and supplies and wood for the fence and gathering lists of volunteers willing to help and making sure all of the cordless drills were charged up and ready to go — the actual work of building the fence and putting it up at the cemetery only took three or four hours.

The lumber was green-treated in Colfax a few days earlier and was rather wet, said Mona Thorson, one of the volunteers.

The Evergreen Cemetery fence will be left unpainted for a year to allow the wood treatment to dry out.

Pastor Walck said it was a possibility Colfax Lutheran could do another “God’s work. Our hands.” project next year to paint the cemetery fence.

All together, about 20 volunteers worked on building the fence and installing it, although all of the volunteers did not necessarily work at the same time.

The materials came from Woods Run Forest Products and were pre-cut to the necessary length.

“Paul Verdon oversaw the whole project and did a lot of the planning and pre-planning,” Pastor Walck said.

“It got down to zip, zip, zip and went right along,” he said. 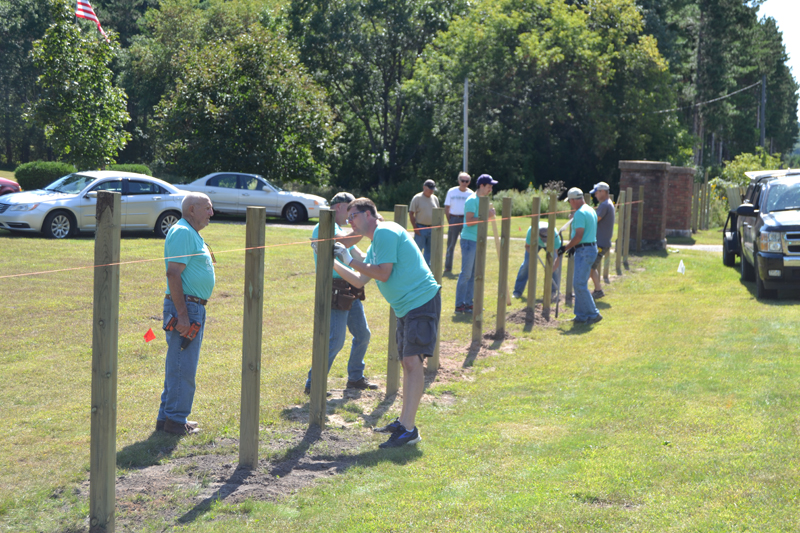 PLUMB LINE — Volunteers installed a plumb line along the posts and marked the height at which the fence panels should be installed during the “God’s work. Our hands.” project by about 20 volunteers from Colfax Lutheran Church on Sunday, September 9, to rebuild and install the cemetery fence at Evergreen Cemetery in Colfax. — Photo by LeAnn R. Ralph

Gust Fehr, one of the volunteers working on building and installing the fence, noted there were about a dozen workers in the courtyard helping to build the fence.

Fehr, who pointed out he is 86 years old, operated a cordless drill to screw the sections of fence to the posts.

The volunteers checked off on the sign-up sheet that they had agreed to have their photographs used.

“That way (with pictures) I can show my kids I still know how to work,” Fehr joked.

“We were really pleased to have a project like that where we could provide the labor,” Pastor Walck said.