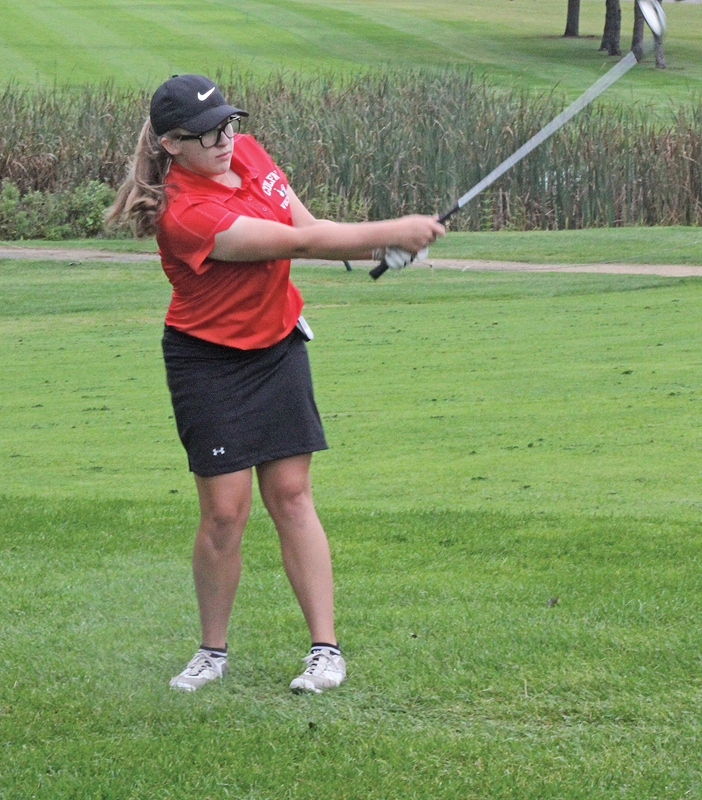 AIMING FOR GREEN — After a pep talk from coach Ryan Krall, Colfax’s Abbi Farley set her sight on hitting the green during a girls’ golf match at Whitetail on Wednesday, August 28. —photo by Amber Hayden

OSSEO-FAIRCHILD – Heavy rains prior to last Thursday’s golf meet in Osseo put some doubt into the minds of players whether they would be able to play the conference contest.

Finishing sixteen strokes behind host Osseo-Fairchild with a score of 218 the Colfax ladies golf team proved they could adapt to the wet conditions that made the course at the September 6 meet seem longer.

“The people in Osseo did a great job of making the course playable for us,” Colfax head coach Ryan Krall said.

Hannah Lemler had the best day she’s had all year shooting a 64, according to coach Krall, earning her first conference points of the season.

“We needed her today, so to shoot her best ever score was a real life saver for us,” stated Krall.

Abby DeMoe tied for first place with Osseo-Fairchild player Keila Kittelson with a score of 45. DeMoe is still atop the conference leader board with two more points than Kittelson.

Finishing sixth and seventh Morgan Schleusner shot a 54 and McKenna Yingst shot 55 keeping their spots in the top eight of the conference as well.

“We have a big meet next week, including our second home meet of the season at Whitetail Golf Course. Hopefully we will start to round into form toward the end of the season and give ourselves a chance to do something pretty special as a team,” coach Krall stated.

Colfax returned home this past Monday, September 10 to host a meet against Regis/Altoona and Osseo-Fairchild. The Vikings cap the week with a meet, hosted by Regis, at the Princeton Valley Golf Course in Eau Claire slated for 4 p.m. tomorrow (Thursday, September 13).