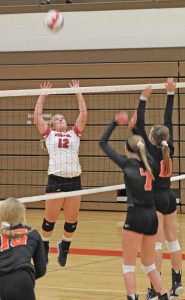 READY TO HIT — Jozie Buchanan (#12) of Colfax goes up to make a hit on the ball during the August 28 home volleyballl match against the Bloomer Blackhawks. —photo by Amber Hayden

COLFAX – With several missed blocks and chances for points, the Colfax volleyball team couldn’t find the opening they were looking for in a August 28 home match against Bloomer.

Those missed opportunities lead the Lady Vikings to a three sets to one loss to the Blackhawks in last Tuesday’s non-conference contest.

During the first set, Colfax managed to come from behind to take the win against the Bloomer Blackhawks finishing with a score of 25-19.

“We played an exceptionally strong first set … sticking with our game plan of shutting down their main hitters,” explained coach Meredith.

Unfortunately, the Vikings could not keep their winning momentum going, dropping the next three games and the match.

Bloomer edged out Colfax during set two with a score of 25-21, and in the final two sets the Lady Vikings fell just short by scores of 19-25 in the third set and 18-25 in the fourth set.

Meredith and Buchanan also backed up the defense with 15 digs a piece, Meredith also had three block attempts and Buchanan had two.

The team fought to close the gaps in the score against the Blackhawks, but according to the Vikings’ coach the night just didn’t go their way.

“The match was extremely close, I believe these types of matches will make us grittier and want to compete at a higher level,” said Meredith. 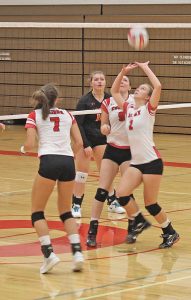 SET IT UP — The Vikings’ Taylor Irwin (#2) sets up the shot for Kameri Meredith (#7) in the second set of the Colfax’s home volleyball match against Bloomer. —photo by Amber Hayden

Taylor Irwin led the way with 18 assists and one ace during the Tuesday night match up, along with Senior Alyssa Dachel leading the defense with 21 digs and 24 receptions.

The Vikings will enjoy a brief but well deserved respite after playing 11 different teams in an eight day span. Colfax will return to the court Thursday, August 6 when they travel to Somerset and will be in Hudson for an Invitational on Saturday, September 8.