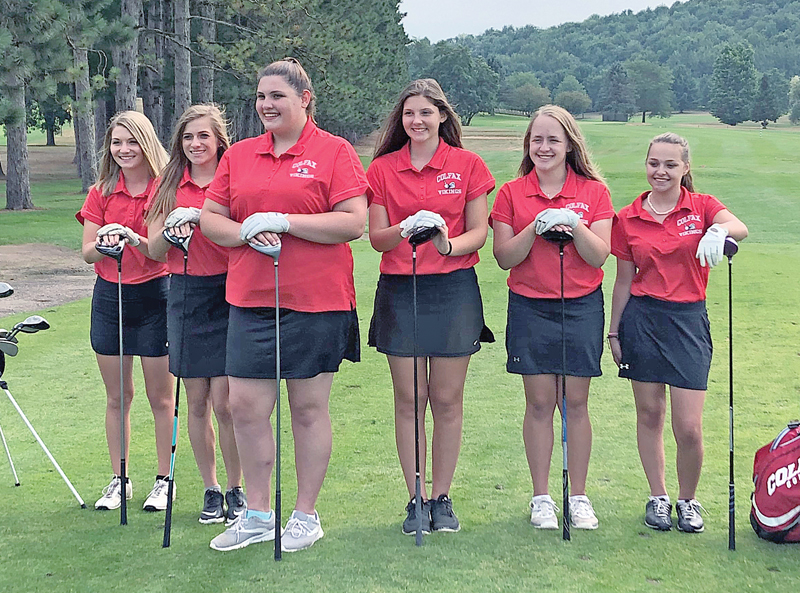 “We have been building this up as a great opportunity to play for something all season long so our girls were excited to host the first event of the year,” explained head coach Ryan Krall of Colfax’s affiliation with a new girls’ golf conference.

Colfax joined with Osseo-Fairchild, Altoona/Regis and Stanley-Boyd to form a new 4-school conference this season.

And for the Vikings, they got off to a good start placing second in the first two matches of that new association with Abby DeMoe claiming medalist (best score) honors in both meets. 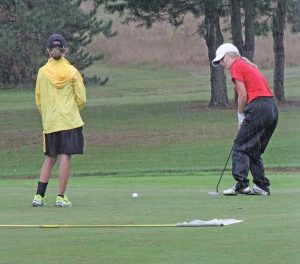 SOAKED — Colfax’s Abby DeMoe fought through the rain during her girls’ golf match up against Osseo-Fairchild and Eau Claire Regis last Tuesday. Above, DeMoe sent a putt to the cup during the August 28 match at Whitetail Golf couse where she placed first. —photo by Amber Hayden

The teams battled the rain  in the inaugural event held August  28. Despite the weather, Colfax finished second on its home course with 229 strokes. Osseo-Fairchild won the event with a 195 and Altoona/Regis finished with a 235 for the three-scoring squads.

“Recent rains had really soaked our course, which made it play much longer than normal – and that isn’t necessarily a strength of our kids,” noted Krall. “But we hung in there and posted a good team result for our first event, finishing second behind an Osseo-Fairchild team that played really well.”

Abby DeMoe was the medalist with a score of 42, earning the team the much needed ten conference points she hopes to earn each match.

“Her (DeMoe) game has improved so much even from the last two years in which she was a state qualifier,” said Krall.

McKenna Yingst, who finished with a 56, and Morgan Schlesuner, who carded a 55, were steady players and each scored points in the first event. Abbi Farley (83) had her first experience of the year and did well for the team.

“We have a lot of potential with this team, hopefully we can get them to be their best by the end of the season.” 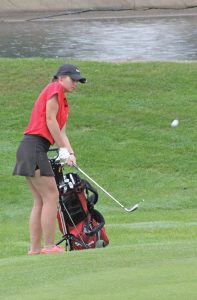 CHIP SHOT — Vikings’ McKenna Yingst chipped this shot it up and on to the green during the August 28 match at Whitetail Golf Course. —photo by Amber Hayden

Colfax once again finished in second behind a tough Osseo-Fairchild team. The Lady Thunder shot a 209 with the Vikings tallying a 223 just three strokes ahead of Altoona/Regis’ score of 226.

“The back nine there is especially tough and most of our girls had never seen it before today,” according to coach Krall. “But the girls did a great job at a really difficult course.”

“Her consistency is really her greatest strength – hopefully she can keep that going as our season goes on,” said Krall.

McKenna Yingst shot her all time best round at Whispering Pines Thursday with a score of 52 which put her in a tie for fourth place.

“Her (Yingst) progress this year has been a life saver for us, we are excited about what she can do by the end of our season,” Krall explained.

Morgan Schleusner finished with a 55 and Abby Klueckmann scored a 72 and Hannah Lemler an 84.

According to Krall the team is trending in the right direction finishing only 14 strokes behind Osseo-Fairchild.

“As a team, we closed the gap a little bit on Osseo-Fairchld in that last match,” added Krall. “If a few things break our way I think we can contend with them later in the season,” he finished.

The girls travel to Osseo tomorrow, September 6 for their next conference match and return home next Monday, September 10 to Whitetail Golf Course.