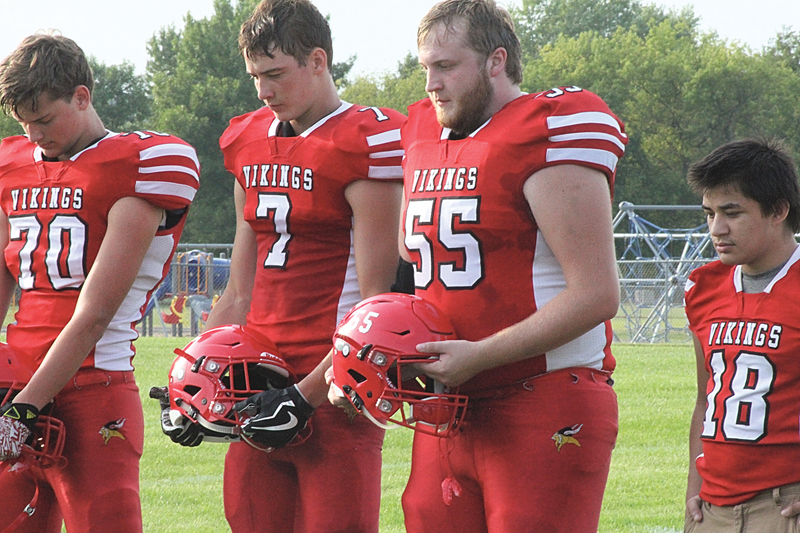 REMEMBERING BRADEN — Colfax football players, from left to right, Wyatt Olson (#70), George Scharlau (#7), Thomas Jensen (#5) and Julio Hernandez (#18) observed a moment of silence in memory of teammate Braden Lemler prior to the start of the Vikings home game against Neillsville/Granton on Friday, August 31. Lemler died in a single-car accident this past May. —photo by Amber Hayden

COLFAX — The Vikings made big plays against the Neillsville/Granton Warriors on August 31 to take home their second football win of the season.

Noah Albricht had no trouble finding one target after another during last Friday night’s game  as the Vikings’ quarterback managed 25 completions for 341 passing yards and five touchdown passes including three to lanky George Scharlau in his 36 attempted throws. Mitchell Harmon added 102 yards of rushing to help Colfax clock Neillsville/Granton 34-12 in a non-conference contest at the LP Bjurquist Athletic Fields.

“I feel like we had a good offensive plan going into this game, and a few strategies to contain them defensively,” said Vikings’ head coach Matt DeMoe. “We executed the plan well. We have a lot of talent on the outside and a solid running game and will need to continue that next week.”

Colfax, who remained unbeaten and improved to 2-0, will have its first road and conference test when it travels to face a strong Mondovi team this Friday, September 7. The Buffaloes shut out defending Dunn-St. Croix champion Elk Mound, 20-0, on the Mounders’ home turf last Friday.

“Next week we move into the D-SC, which has been very good,” stated DeMoe. “To continue to have success we need to eliminate the mistakes and turnovers offensively. We (also) need to win the turnover battle and we need to be more disciplined with everything we do.” 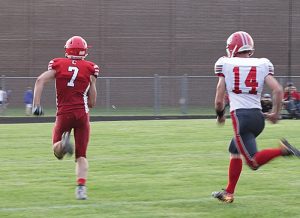 GONE — The Vikings’ George Scharlau scores on one of his three touchdown reception in an August 31 home football game against Neillsville/Granton. Scharlau hauled in scoring catches of 54, 27 and 18 yards from quarterback Noach Albricht, who also had two more TD tosses in Colfax’s 34-12 win. —photo by Amber Hayden

Colfax wasted no time in finding the end zone on its first drive of the game.

Albricht tossed an 18-yard pass to Trey Hovde for the game’s and Colfax’s first touchdown at 6:10 of the first quarter. Jackson Hellmann followed it up with a successful two point conversion catch from Albricht to bring the score to 8-0.

On the Vikings’ second drive of the evening, Jackson Hellmann caught a 21-yard reception from Albricht, but the Vikings couldn’t make it past the third down before having to punt the ball.

Hellmann made the best of the Vikings’ next drive after the team made it back into the red zone. After a second attempt, due to a penalty, Hellmann caught a 12-yard pass from Albricht to score Colfax’s  second touchdown of the contest, the try for the two point conversion was unsuccessful, however, resulting in a 14-0 Viking lead at 11:06 of the second.

During that second quarter, defensive players Cole Kiekhafer and Wyatt Olson found Warriors quarterback Braden Trunkel for a sack. Trunkel exited the game with an arm injury following the play and did not return.

Neillsville/Granton would not let the loss of their quarterback dampen its spirit. The Warriors made their way to the end zone for the first of two scores on an 8-yard run by Thomas Selk with 5:09 left in the first half. A failed conversion run left the score at 14-6.

Wide receiver George Scharlau made some big plays for the Vikings’ offense Friday evening, the first coming on a 54-yard touchdown pass from Albricht for Colfax’s third six-pointer of the opening half. Mitch Harmon attempted another two-point conversion for the team but Neillsville/Granton stopped the run just short of the goal line but the Vikes lead grew to 20-6 at the half.

Colfax added a pair of second-half touchdowns – both pass completions from Albricht to Scharlau.

Scharlau hauled in a 27-yard scoring strike off the arm of Albricht for his second TD reception of the night with 2:16 remaining in the third quarter that made it a 27-6 ball game after the pass for two fell incomplete. 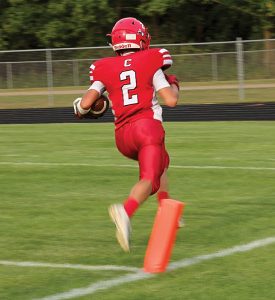 CROSSING THE GOAL LINE for Colfax’s first touchdown of the game was Trey Hovde (#2), who scored on a 18-yard pass from Noah Albricht in the first quarter of the August 31 home game against Neillsville/Granton. The Vikings went on to win the non-conference contest 34-12. —photo by Amber Hayden

The Warriors picked up their second and final six-point score on Selk’s second touchdown run. The five-yard scamper, minus the failed conversion try, made the score 27-12 as the contest headed into its final 12 minutes of action.

Although the Vikings seemed to tire some in the final stanza, Albricht and Scharlau were able to make one final scoring connection. Scharlau caught his third touchdown pass of the game, this one from 18 yards away with 8:20 left in the game. A successful two-point conversion run by Mitch Harmon gave the Vikings a 34-12 lead and final victory.

Despite two interceptions, Noah Albricht’s arm sizzled in his five-touchdown performance which saw George Scharlau haul in 11 of Albricht’s 25 completions for 184 yards and three scores. Jackson Hellmann caught five for 67 yards and a score and Trey Hovde had six catches for 69 yards including an 18-yard TD.

Wyatt Olson and Austin Schindler managed three sacks on the quarterback and 7 total tackles during the August 31 game.

Before the start of the game, the Vikings held a memorial for former player Braden Lemler and dedicated the rest of the 2018 season to his memory.