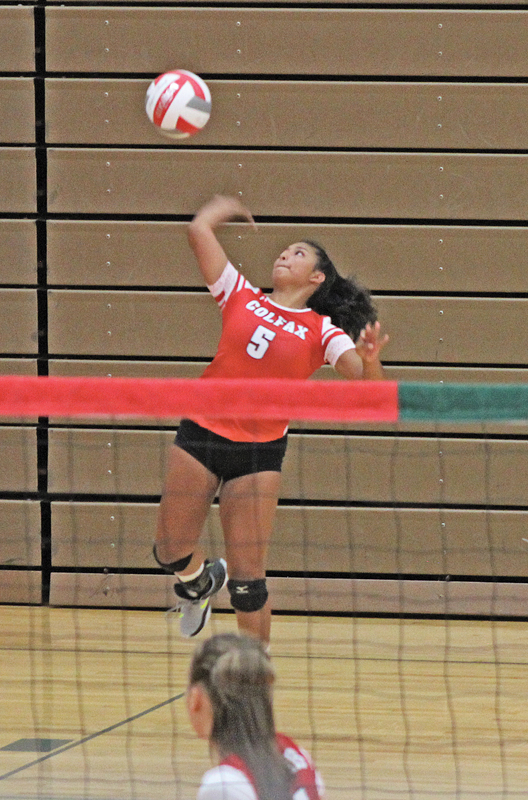 READY TO HIT — The Vikings’ Addy Olson (#5) served up the ball during the August 21 match against Eau Claire Regis at the Colfax’ home quad. —photo by Amber Hayden

COLFAX — The Lady Vikings took the court for their first action of the year at home last Tuesday and showed they could start the season just as they ended last year’s.

Baldwin, Unity and Regis all met under the Viking’s roof with hopes of pulling off a win against last year’s D-SC conference and regional winners, but to no avail as the Colfax girls went 3-0 during the August 21 quadrangular.

“I thought it was a great start to the season and I saw some promising things that could lead to success down the road,” Coach Meredith explained.

Junior Kameri Meredith led the offense with 25 kills during the three matches, Rachel Scharlau added in 15 kills and Savannah Henricks accounted for 13 more.

A few days later, Colfax headed to UW-Stout for the highly competitive Menomonie Volleyball Sprawl on August 24 and 25. The Vikings were one of 40 teams across all divisions to compete in tounamenet on the UW-Stout campus.

Saturday saw the Vikings start their morning with a win against Hudson which put the team in the top four (semifinal) bracket against the defending Division four state champions from Clayton.

“We started out slow after a two match break,” according to Meredith, “we couldn’t seem to generate the same energy and composure we had earlier and dropped a quick set 11-25.”

The Vikings finished the two-day event with a match up against Eau Claire North for third place. 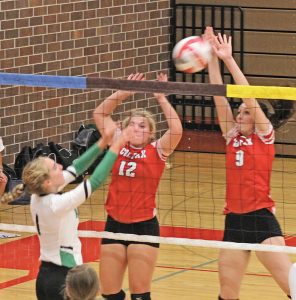 BLOCKED — Colfax’ Jozie Buchanan (#12) and Savannah Henricks (#9) got the block against Eau Claire Regis player Bria Thalacker (#1) during the third set of the match during last Tuesday’s volleyball quad at Colfax. —photo by Amber Hayden

“Like the Clayton match, we quickly dropped set one but put forth a better effort in set two before losing 21-25,” commented Meredith, whose Vikings finished an impressive fourth.

Jozie Buchanan led the Colfax team with 39 kills and 16 aces during the two day sprawl. Buchanan tied Taylor Irwin with 49 assists during the sets, Alyssa Dachel led the defensive charge with 56 digs followed closely by Kameri Meredith with 54 digs.

Sam Pretasky finished with ten block kills for the team.

“We played extremely well most of the weekend and I’m excited about the potential this team has as the season progresses,” commented the Vikings coach.

Coach Meredith explained the team will be focusing more aggressively on serving but has hope the mindset will help them to be more disciplined physically and mentally.

The team hosted Bloomer Tuesday, August 28. Colfax is then off until Thursday, September 6 when they open a three-game road trip in Somerset followed by a invite in Huson on September 8 and the conference opener in Durand on September 13.