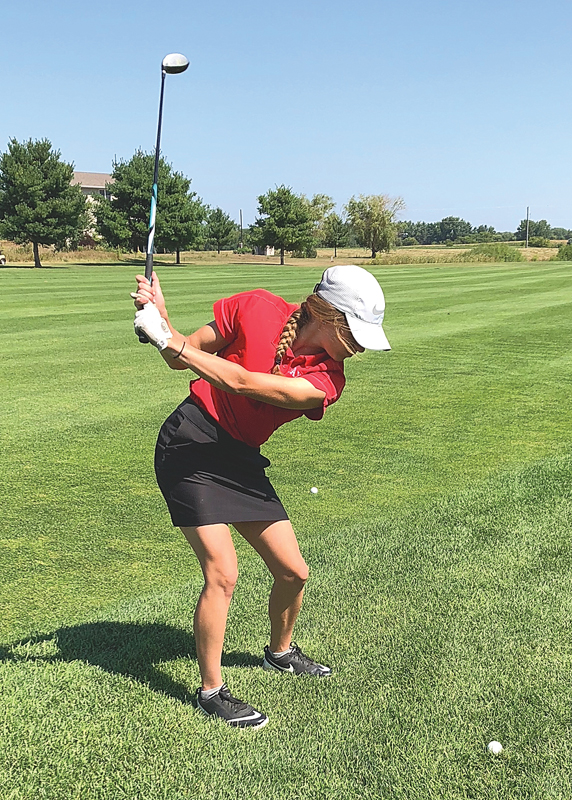 MORGAN Schleusner of Colfax prepared to take a swing during a recent girls’ golf meet hosted by Baldwin-Woodville at Pheasant Hills in Hammond. Schleusner shot a 107 in the 18-hole invitational to place 19th. —photo submitted

COLFAX — It has been a busy first few weeks for the Colfax girls’ golf team.

The Lady Vikings will play eight matches in just  20 days to start this year’s links’ campaign.

Colfax teed off its 2018 season with a strong performance in Barron on August 10.

Finishing second in the small school division, coach Ryan Krall is optimistic at what the start could mean for the rest of the season.

The Lady Vikings then played at Pinecrest Golf Course in Chetek on August 13. The ladies final tally was 220 which put them in first place.

The team attended the Eau Claire North Invite the following  day, August 14, for the first time, and had an eye-opening experience competing against some of the area’s top-level girls’ golf  squads. Faced with hot weather and a challenging course, the Colfax team shot a 441.

Two days later, August 16, the Lady Vikings would take to another challenging course at Big Fish for the Hayward Invitational. Difficult greens and hilly fairways tested the girl’s patience and stamina for much of the match, but they managed to finish fourth overall.

The team made its way to Pheasant Hills Golf Course in Hammond August 22. Colfax has looked forward to this meet knowing the WIAA Regional competition will be played there later this season. The Lady Vikings struggled with the course shooting a 473.

The Vikings also competed in Amery on Monday, August 20 but meet results were not available prior to press time.

The Colfax ladies hosted their first conference match yesterday (Tuesday, August 28) at Whitetail Golf Course against Osseo-Fairchild, Stanley-Boyd and Regis/Altoona. The squad then heads to Whispering Pines Golf Course on Thursday, August 30 for a  rematch with Osseo-Fairchild, Stanley-Boyd and Regis/Altoona before taking a short break for the Labor Day holiday.

Coach Krall could not have scripted a better start for the 2018 season for the girls’ golf team.

The team finished second in the small school division and shot an even par 70 after shooting 80 last year at the same event.

“Everyone contributed great shots for us in what ended up being a pretty stress free round for the most part,” according to Krall.

The team leaned on Junior Abby DeMoe for a largest number of their shots and McKenna Yingst helped the team on tee shots.

According to coach Krall the team has always liked to start the year with this tournament. “It’s low key and gives our kids a chance to get back into the flow of competitive golf,” he said.

“Klueckmann really showed the potential we have known she has for a long time,” commented Krall.

Krall feels if the team continues to perform the way they have it will be a positive season.

With the caliber of schools and golfers coach Krall was pleased with the results for his Vikings’ team.

“Abby DeMoe proved she could play with most of the really good golfers in our area regardless of division,” he said.

DeMoe finished the tournament in third shooting an 85, proving she is off to a great start and gaining confidence with every match they play.

The girls had a great day according to coach Krall, shooting 16 shots better as a team than they had two days earlier.

Morgan Schleusner posted her first top 15 finish of the 2018 season.

“Morgan is a tremendous competitor whose only fault is that sometimes she tries too hard to do well, I was happy to see her post a finish that is a little closer to what she expects every time out,” commented the Vikings’ coach.

McKenna Yingst took a step forward for the team shooting 13 shots better than she had at the Eau Claire Invitational. “She will be key to our success moving forward,” explained Krall.

Abby DeMoe finished fourth for the team shooting better on a course that has given her problems in the past.

On August 22 the girls took to the links for a meet they have been looking forward to all season. “Our kids have really worked hard at some specific parts of the game that we need to improve on to really see our scores drop,” Krall said.

Hannah Lemler has stepped up to play for the injured Abby Klueckmann, Lemler had yet to experience any varsity play until the August 22 meet. “She (Lemler) did a great job handling the pressure … she has some potential to really help us down the road,” according to Krall.

Morgan Schleusner has been steady for the Lady Vikings team in the 2018 season. Shooting 107 for the day earning her nineteenth place.