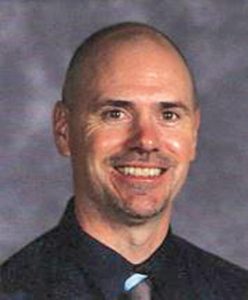 ELK MOUND  —  The Elk Mound Board of Education has accepted the resignation of high school principal Paul Weber.

The school board accepted Weber’s resignation during the regular monthly meeting August 20 held prior to the school district’s annual meeting.

The Elk Mound school district is like a family, and “Paul, Eric, and I have been working together for 15 years. We know each other so well, we know what each of us thinking,” said Eric Wright, district administrator in Elk Mound.

The “other Eric” is Eric Hanson, Mound View Elementary principal.

Weber has accepted a principal position in Madison, Wright said.

His last day of work in Elk Mound was Thursday, August 23.

Weber graduated from UW-Green Bay with certification as a social studies teacher. He is originally from Park Falls.

His first teaching job was at Wausau Newman Catholic High School teaching world history, government and geography. His next job was at Phillips High School where he taught social studies and was the varsity coach for tennis and girls’ basketball and where he also taught the fundamentals of basketball to boys and girls ages fourth grade and up.

Weber began serving as the principal at Elk Mound High School in 2003 and also served as the high school athletic director.

The Elk Mound Board of Education meets next on September 17.

In other business, the Elk Mound Board of Education:

• Recognized Rod Radtke for his Notable Educational Contributions. Radtke spends many hours volunteering in the school district, including remodeling storage areas for athletic equipment and serving as a member of the Booster Club.

• Reviewed changes to the student handbook. Some of the changes included establishing a maximum of 20 players in Mound View Elementary’s two Gaga pits for safety reasons; requiring students to discuss any plans to participate in a demonstration with the principal in advance and requiring a pre-excused note from a parent or guardian. If the student is in elementary school, students are required to be accompanied at the demonstration by a parent or guardian.

• Approved the teacher and support staff handbook, which included the addition that when staff members take pictures for the school district’s website and Facebook page to make sure all students in the picture are approved by their parents to appear in published photographs. Another addition to the handbook was the prohibition against texting and driving when using a personal vehicle on school business. The state’s Act 143 on school safety was included as well which requires staff to report a school threat if they are aware of a threat.

• Adopted for the first reading a revision of the policy related to student suspensions and expulsions to include a pre-expulsion option. The additional rule was suggested by the Wisconsin Association of School Boards to meet the legal requirement.

• Approved changes for the policy related to the district’s activity account and took Weber’s name off as a check signer and added the school superintendent, the middle school principal and the high school principal as authorized to sign checks for the account.

• Approved a memorandum of understanding with St. Joseph’s Hospital for occupational therapy and physical therapy services.

During a closed session, the Elk Mound Board of Education:

• Took no action on hiring a second middle school teacher.

• Approved adjustments for the teacher compensation guide that included adding $400 to the base salary, adding a small amount of compensation for the FFA and Rube Goldberg advisors, and adding an E-sports (gaming) advisor and a Mound View playground supervisor.