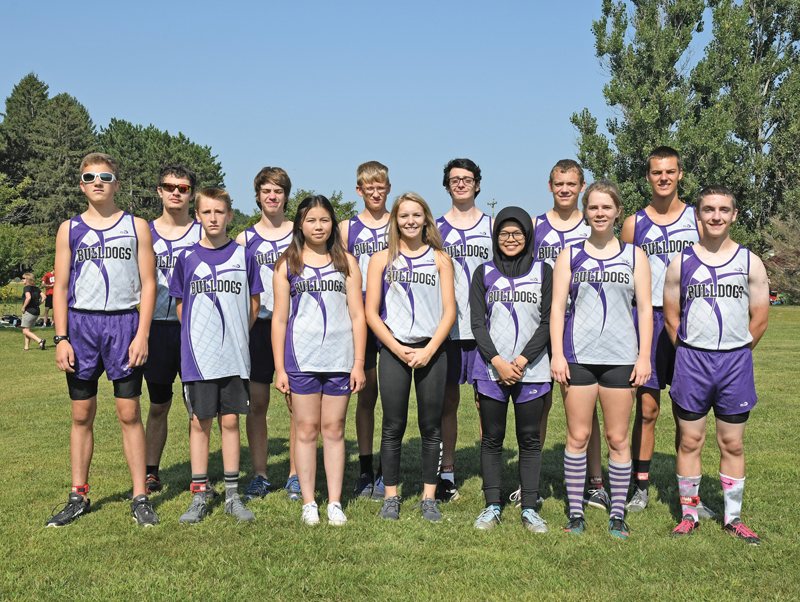 BOYCEVILE – Head Coach Corey Day has his work cut out for him as he encourages his young team to do their best. After graduating eight seniors last year, Day will have trouble just filling all their spots.

For the boys, one of their biggest losses was Rian Corr who was a top three runner for the Bulldogs. He was also one of their leaders as team captain. Other boys lost to graduation were Ryker Ferg, Emmett Kapsner, Sean Best and Brennan Wheeldon. On the girls’ side, they lost all conference runner Emily Voelker, team captian, Marissa Dormanen and the consistent runner, Lauryn Dominc.

Besides having Emily Voelker making all conference last year, Nathan Corr, Steve Rasmussen and Naomi Hillman fell just short of this honor. Day feels that it has fueled them to run better this year. As for those returners Day states “Nathan Corr had a great season running 18:38 last year which equates to a 6 minute pace. He is a tireless worker and he has high goals.” Steve Rasmussen, running for the first time last year as a sophomore broke the 19 minute mark. “I see him being better this year,” remarked Coach Day.

Some new additions to the team this year are junior Rachel Becker for the girls and freshman Brian Johnson and Elijah Farrell for the boys. Day states that Becker is a nice addition to the team. “She has a great work ethic and it will be exciting to see what she can accomplish.” As for Farrell and Johnson, Day is interested to see how they transition to the 5K. He also commented that they have been running all summer.

With only one senior on the team, the Bulldogs will have to rely on the experience of some of their younger runners. Day feels that they have the potential to be successful but this will depend on how the freshman and sophomores deal with competing at the varsity level. “From my experience some kids embrace that challenge and others crumble. So I would say it is unknown. Many times in running we get focused on some hard numbers, and I think with a young group like this that would be a mistake because the potential truly is unknown.

Day expects his boys’ team to be in the middle of the pack to start the season but he says, “if we can weather the storm and keep our confidence high and close that gap we can put ourselves in the top 25% of most races.”

For the girls’ team their goal is to get better as individuals on a daily basis and put a team out there at the end of the year.

Coach Day hasn’t put any thought as to what the competition will be like this year. His main focus is on his team and what they can do because as he says, “that is the only thing I can really control as a coach.”

Day will be assisted by volunteer coach, Jacob Peterson who was an All-American cross country runner at UW-La Crosse.

Bulldogs move into WIAA playoffs with victory over Clear Lake