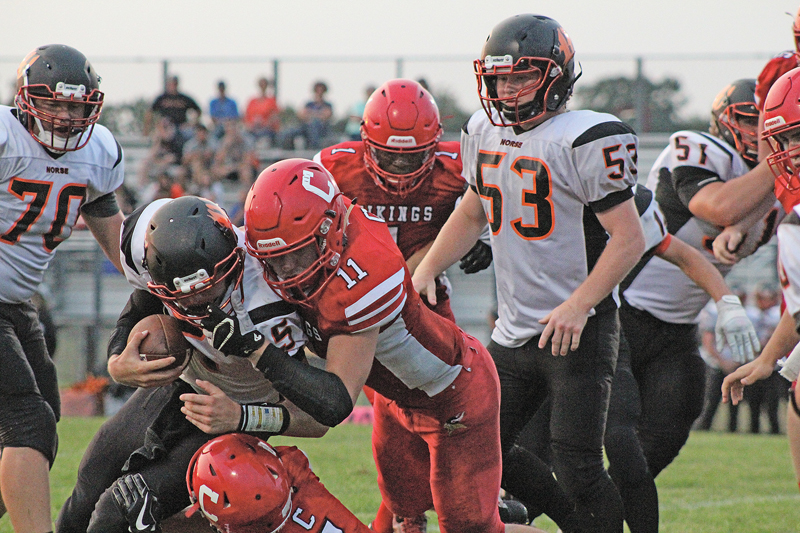 TACKLED FOR A LOSS — Jackson Hellmann (#11) of Colfax sacked Whitehall quarterback Parker Windjue (#5) for a loss during last Friday’s football season opener in Colfax. The Vikings won the contest 42-19. —photo by Amber Hayden

COLFAX — The Colfax Vikings started their season off in the right direction with a win over the Whitehall Norseman in the August 17 season and home opener.

Friday night’s game ended with a victory and a step in the right direction for the team, and head coach DeMoe and those in the stands cheering at the 42-19 win over the Whitehall Norseman. The first drive of the game was rough for the Vikings, with an interception one and a half minutes in, and the team looked like they would have a rough start to the 2018 season.

Even with the Whitehall interception the Vikings would hold them to three and out and cause the Norseman to punt the ball.

During the play Marcus Drees found a way to fight through the Norseman offensive line to block the kick, giving the Vikings another close shot to reach the end zone.

Whitehall would score the first points of the night after Norseman senior Parker Windjue would intercept a pass from Noah Albricht in the first two minutes of the 2nd quarter making it a 7-0 game.

The Vikings would not let the score stay this way long, George Scharlau had a 24 yard reception taking the team to a 1st and goal.

After a Vikings’ touchdown by running back Mitch Harmon, the team made an attempt for a two point conversion, but Harmon slipped, resulting in a 6-7 game in favor of the Norseman.

On the ensuing drive, quarterback Noah Albricht made a move of his own during the 2nd quarter after the missed rush attempt from Harmon.

With four minutes remaining Albricht rushed four yards bringing the score to 12-7, and with another two point conversion try Albricht would hit his target in Jackson Hellmann giving the team a 14-7 lead.

Colfax would find a way to score one more time in the first half after a fumble recovery from Cole Kiekhafer with just seconds to go. Scharlau would score his 1st touchdown of the night, and Harmon would have a successful attempt for a two point conversion for the team ending the half with a 22-7 lead over Whitehall.

The following seven minutes of play would be a battle of defensive plays for both teams. Cole Kiekhafer helped the Vikings team with an interception in the 3rd quarter and returning it for 23 yards.

During the next Vikings’ possession, Albricht was able to drive the ball downfield once again finding Trey Hovde for a gain of 23 yards, then again to Ed Hydukovich for 10 yards and a touchdown, followed by a Scharlau two point conversion extending the Viking lead to 30-7.

Mitch Harmon left Friday night’s game in the 4th quarter after being shook up with just shy of six minutes to go in the game.

Less than a minute later Dalton Schotter would rush for a touchdown, and the two point conversion attempt would result in a holding call against the Vikings and Albricht was sacked missing the chance to pass the ball to the end zone. Colfax extended their lead to 36-7.

After 36 unanswered points, the Norsemen would rally to score twice more in the fourth quarter, but not before a Vikings’ interception by Tanner Hoffman would break up the two touchdowns with another Colfax touchdown ending the game 42-19.

“We played a solid second half, and we look forward to putting it all together for next week,” DeMoe said.

Coach DeMoe sees the win as a great way to start the 2018 season for the team. “I told the players after the game, this is what happens when a great group of hard working kids come together as one,” he said.

Wyatt Olson and Jackson Hellmann put up nine tackles between the pair, Olson and Hellmann also managed two fumble recoveries for the Vikings in the 2nd quarter. Sophomore Austin Schindler had seven tackles Friday night, two of which were quarterback sacks.

The next two games will be home games for Colfax, in which the team hopes to fulfill the coach’s first goal for them and win the first three games at home. Eleva-Srum comes to town this Friday.