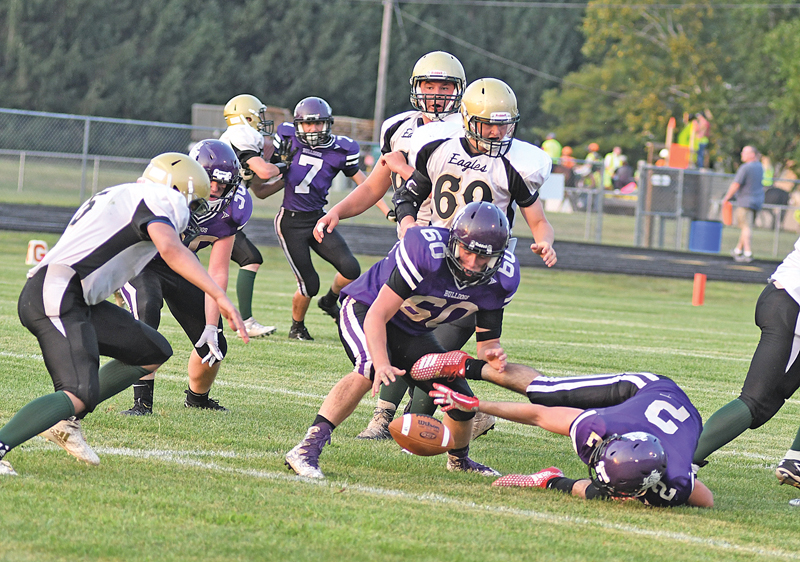 LOOSE BALL — Boyceville defenders Triston Bowell (#60) and Ty Gundlach (#2) go after the football after Chequamegon fumbled the ball in the first quarter of a non-conference game at Boyceville last Friday, August 17. Ty Gundlach came up with the recovery but Boyceville was unable to move the ball. The Bulldogs were shut out 14-0 in their home and season opener. —photo by Shawn DeWitt

BOYCEVILLE — There were plenty of first-game faux pas when Boyceville hosted Chequamegon in the football season opener for both squads last Friday at Evenson Field.

A folly of first-half football errors including a bevy of whistled infractions kept the contest scoreless at half time as both teams had touchdowns erased by penalties.

Unfortunately, when the scoreless deadlock finally was broken in the second half of play, it was Chequamegon that earned all the points.

A third-quarter punt return for a score coupled with a solid touchdown drive in the fourth gave the Screaming Eagles a 14-0 shutout victory over the Bulldogs.

It was the first victory in nearly two years for Chequamegon, a member of the tough Marawood Conference.

Both squads had difficulty sustaining drives throughout the first half as penalties stalled and ended several promising offensive drives. 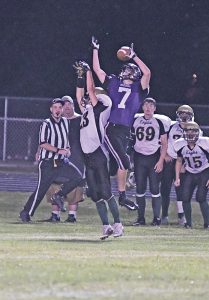 LEAPING ATTEMPT — Bulldogs’ junior Logan Knudtson leaped high over a Chequamegon defender to get a hand on this long pass attempt by quarterback Trevor Hollister. Knudtson, unfortunately, could not maintain control to complete the catch in last Friday’s home football loss. —photo by Shawn DeWitt

And when each team scored in the first 24 minutes of play, both touchdowns were negated due to penalties.

Chequamegon finally put six points on the scoreboard with a nifty 70-yard punt return in the third quarter. A two-point conversion run boosted the Screaming Eagles lead to 8-0.

The Screaming Eagles tacked on a score in the fourth quarter to give the visitors a 14-point victory in the non-conference contest.

Boyceville showed flashes of offensive prowess particularly in their passing game but it wasn’t enough to overcome a pair of Bulldog turnovers – a fumble and an interception.

Trevor Hollister filled in admirable at the quarterback position after Sempf exited the game but the Bulldogs, who spent much of the second half mired  in the shadow of its own goal, averaged less than a minute on its offensive possessions as many of its passing attempts fell incomplete.

The Screaming Eagles were able to chew up yardage and game time with a surging ground attack in the second half.

The Bulldogs’ quarterbacking triumvirate of Trevor Hollister and Brendan and Connor Sempf hit on just six of 26 passes for 78 yards. Brendan Sempf completed three of his fourth tosses for 37 yard while Hollister finished with 25 yards on a 2-for-21 performance.

Ty Gundlach finished with 45 yards rushing to lead the Bulldogs, who wound up with just 33 yards on the ground after accounting for negative yardage.

Boyceville will look to even it early season record when it travels to Clear Lake this Friday to face the Warriors in a non-conference tilt. 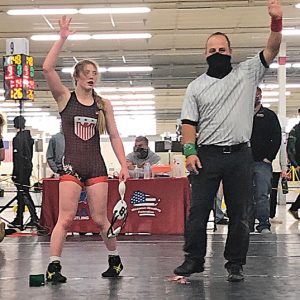 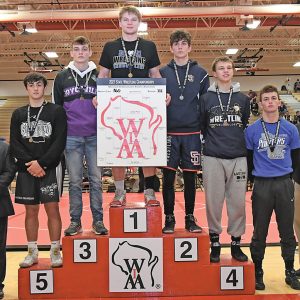 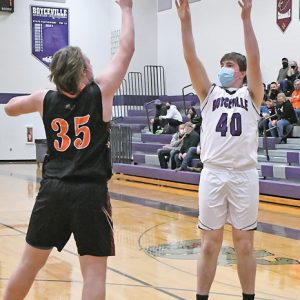