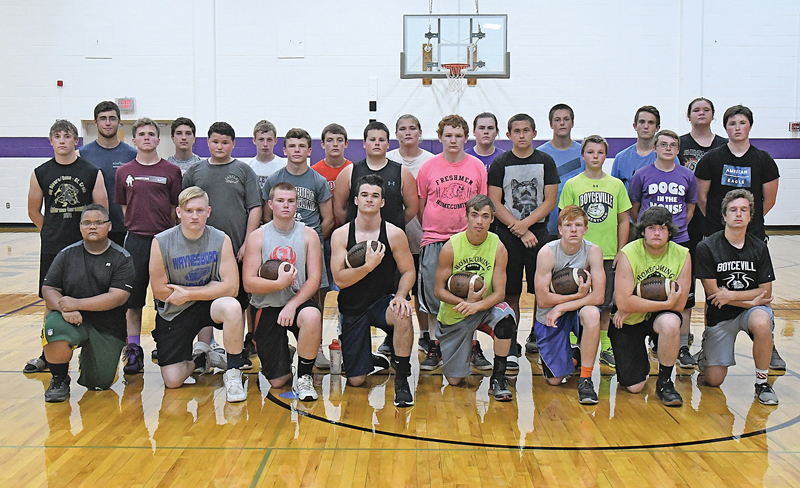 BOYCEVILLE – Second-year head coach Jordan Anderson has one goal for his Boyceville “Bulldogs” football entering this season and that is to build upon last year’s foundation.

After the Bulldogs finished 1-5 in conference play and 2-7 overall, Anderson knows he must continue to work with the team on leadership and driving up the numbers of kids coming out for football.

“We only won two games last year,” Anderson said. “We want to end our drought.”

Entering the season with over 30 players will have an impact in 2018, Anderson believes. “Having roughly 30 kids out is nice because practices become more competitive and the kids are pushing each other for a spot and more playing time,” says the Bulldogs coach.

Bryce Boda graduated this past May after having a strong season as quarterback, nailing 69 attempted passes for 192 yards and four touchdowns.

Other seniors that left the team this May were Luke Knudtson contributing three touchdowns among his 22 receptions, and Bryce Larson got into some fun on the defensive line registering 71 total tackles and two sacks.

“Younger players stepped up into leadership roles last year, they are more comfortable being leaders now that they are a year older,” according to Anderson. Meaning that Bulldog fans will see some returning talent from last season’s team.

Ty Gundlach returns to the Bulldogs this year as a senior, adding some depth to the defensive line. With 69 tackles in 2017 Gundlach will bring strength to the team as a senior leader for the defense.

The offense will get help from junior Brendan Sempf after an impressive season last year. With 22 receptions averaging for 21.5 yards and three touchdowns, fans could see some of the same numbers from him for the upcoming season.

Nine other letter winners return for the 2018 season. Connor Sempf takes the helm at quarterback for the Bulldogs after playing six games with a 44.3 percent completion rate, Sempf also has one touchdown under his belt making him a good candidate for the position.

Erick Loback and Dylan McNew will see more play time for the team on defense and offense, managing six tackles between the pair last season.

Sophomore Trevor Hollister along with senior Brady Nye return to fill the spots of tight end and linebacker. Hollister played one game for offense with a reception for five yards, defensively finding his target for five tackles in his three games. Nye had 13 tackles in just four varsity appearances.

During the off-season Anderson was excited with the turn out they had concerning player involvement. “We had five contact days and the participation was good. The kids came in coachable and eager to learn and get better,” commented Anderson.

With the comfort level between coaches and players seeming to improve from last year to this year, coach Anderson expects the team to build off of their season last year. “We have high numbers for our offensive line and the competition has driven the kids to get better.”

With a tough Dunn-St. Croix conference, Anderson feels it will once again be rich with depth and talent. “Elk Mound, Mondovi, Spring Valley, and Durand are always solid,” he said.

Boyceville will start its season off with a non-conference home game against Chequamegon this Friday, August 17 at 7 p.m. The Bulldogs then travel to Clear Lake for another non-conference game Friday, August 24. They will kick off their 2018 D-SC opener in Glenwood City against their arch rivals on August 31 at 7 p.m.