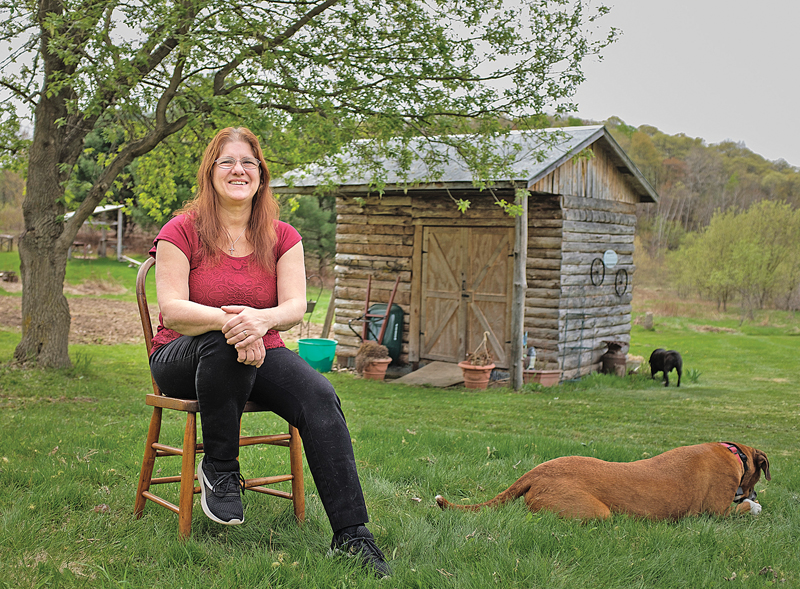 SURVIVOR — Susan Kohnke, of Colfax, contracted sepsis, a life-threatening complication of an infection, after experiencing a kidney stone. She is recovering after treatment at Mayo Clinic Health System in Eau Claire. —photo by Jeff Thompson

MENOMONIE — The graduation party of Susan Kohnke’s son was memorable, but not in the way she would have wanted. Instead of reflecting on a day celebrating school successes, and spending time with friends and family, the 58-year-old Colfax, Wisconsin, woman instead remembers it being the day she developed symptoms of a severe condition that nearly claimed her life.

Kohnke, a truck driver and otherwise healthy person with two grown children and three grandchildren, was attending her son’s college graduation party in June 2017 when she began feeling ill. She felt nauseous, and had a backache and proceeded to vomit. Friends suspected she had a kidney stone.

She went to Mayo Clinic Health System – Red Cedar in Menomonie, where doctors verified she had a kidney stone, and prescribed pain and anti-nausea medications. Because the kidney stone was too large to pass, they advised her to go to the Eau Claire hospital on the following Monday to have it blasted in a procedure called extracorporeal shock wave lithotripsy.

A Turn for the Worse

Kohnke’s symptoms worsened over the weekend. She developed a high fever and became so confused she was unable to finish a sentence. When her husband took her to the hospital on Monday, they went to the Emergency Department. She says that’s the last memory she had for four days.

She later learned that her kidney stone had likely begun to pass through the ureter but scratched the tube along the way, causing it to bleed and prompting her body to react as it did.

Over the course of her multiday hospitalization in Eau Claire, Kohnke contracted sepsis — a life-threatening complication of an infection. She then was connected to a ventilator and feeding tube.

“My husband said there were 30 different bags of IVs hanging behind my bed,” she says. “It was touch-and-go there for a while. They weren’t sure if I was going to make it through or not.”

Lawrence Sprecher, M.D., a hospitalist in Eau Claire, describes sepsis as the body’s overwhelming immune response to an infection. Its severity depends on how promptly it’s treated, but he notes it generally carries a 25 percent chance of death if untreated.

“When the body responds to an infection, it’s not much different than the way police respond to a call of a crime,” Dr. Sprecher says. “At first, there may be a modest response, but if the crime turns out to be large, there will be more and more of a police response. It’s that way with sepsis. At first, there might be a moderate response, but if the body proceeds to develop an overwhelming infection, then the body’s response actually gets out of control.”

Bioactive chemicals are released in an effort to fight the infection, but in high amounts, they are counterproductive. Prompt administration of antibiotics, along with copious amounts of I.V. fluids, is the preferred course of treatment.

“We want proper treatment started in less than an hour of presentation, and less than 30 minutes is preferred,” Dr. Sprecher says. “If the antibiotics can be started within a half hour, you’re going to improve your mortality rate by about 50 percent.”

No Time to Lose

Kohnke underwent an aggressive course of antibiotics, received multiple medical interventions and was discharged over a week later.

“I still have a hard time thinking how close I was to not being here,” she says. “When I read other people’s stories, it’s like, ‘Oh my gosh. It could’ve been a lot worse.’”

Doctors told Kohnke that a full recovery could take up to a year and 18 months or more for some patients. Although she continues to recover, Kohnke says she is feeling “about 90 to 95 percent” today.

“From what I’ve read, I’m pretty lucky,” she says. “The side effects I have are really minimal compared to other people.” Since then, she also has had her gall bladder removed.

Kohnke says she can’t thank Dr. Sprecher and the rest of her medical team enough for their quick action and recognition of her symptoms.

“Oh, they were fantastic,” she says. “My husband said as soon as they knew it was sepsis, it went from one doctor and a couple nurses in the room to three or four doctors, and I don’t know how many nurses. If it wasn’t for them getting that diagnosis right away, it could’ve been a lot more serious. They were right on the ball to know what to do.”

Both she and Dr. Sprecher say they hope her story brings awareness of the signs of sepsis to others.

When to Seek Medical Attention

Seek prompt medical attention if you experience these symptoms:

• Mental change, such as confusion or difficulty waking up