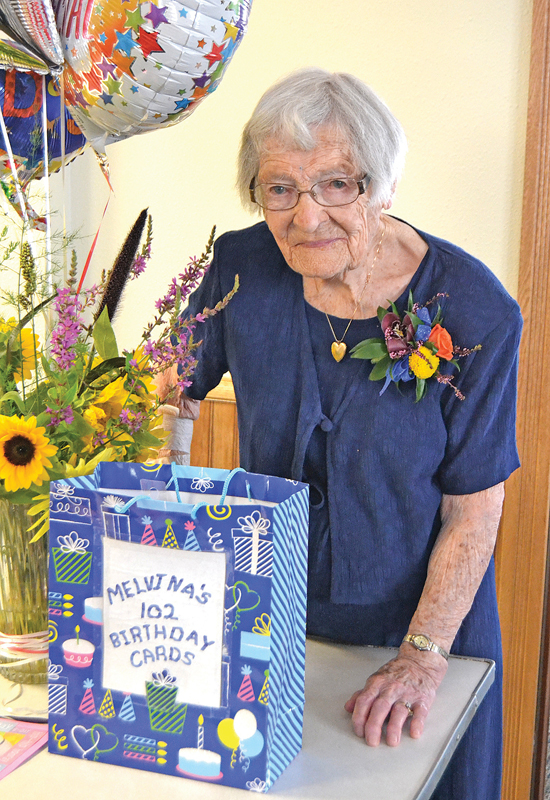 HAPPY BIRTHDAY — Melvina Solberg Evenson celebrated her 102nd birthday at the Grapevine Senior Center on Sunday, August 5. She said she was “very blessed” to have so many people come to help her celebrate her birthday. —photo by LeAnn R. Ralph

COLFAX  —  Melvina Solberg Evenson, who is remembered by many around Colfax as the owner of Solberg’s Ready-to-Wear on Main Street, celebrated her 102nd birthday on Sunday, August 5, at the Grapevine Senior Center.

“Look at all of the people who are here. I am so blessed to have so many people come for my birthday,” she said.

But it was the story behind Melvina’s memorization of the 103rd Psalm, however, that kept her guests chuckling for quite some time.

Melvina had memorized the 103rd Psalm after she had retired.

Without Solberg’s Ready-to-Wear to take care of and manage, her sister, Ruby, said Melvina had better do something for exercise, “or you won’t last very long.”

So — she bought a trampoline and decided to jump on the trampoline for 30 minutes every day.

The first day Melvina spent on the trampoline, the 30 minutes seemed like an eternity.

Then she remembered a pastor she once knew who had recited the 103rd Psalm from memory in English and in Swedish.

Melvina had been inspired by the pastor’s recitation, so she took three sheets of wallpaper and wrote out the 103rd Psalm and hung the wallpaper where she could see it while she jumped on the trampoline.

After that, the stints on the trampoline seemed to go by in an instant, and Melvina ended up memorizing the 103rd Psalm as well.

When she had finished reciting the Psalm for her guests, Melvina said, “I could do more.”

Melvina also is well known around Colfax for her expert ability to make lefse, the flat Norwegian potato pastry.

The year she turned 100, Melvina did a lefse-making demonstration at Colfax Lutheran Church during the fall bazaar in October.

Her son, Ronald Solberg, now helps her with making lefse, but by the time of bazaar in 2016, she had already made 300 of them that fall.

Melvina also makes lefse for the annual craft sale at the Grapevine Senior Center in November as a fund raiser for the Merry Mixers senior citizens group.

When the Colfax Messenger asked to take a picture of Melvina at her 102nd birthday party for the newspaper, she graciously agreed.

Solberg’s Ready-to-Wear was located in the building that now houses the Colfax Arts & Antique Mall and was in operation for about 25 years before it became The Clothes Line operated by Marlene Johnson and Mary Fennie.

People who drive through Colfax in the morning may also recall seeing Melvina recently crossing Main Street on a trip to the post office.