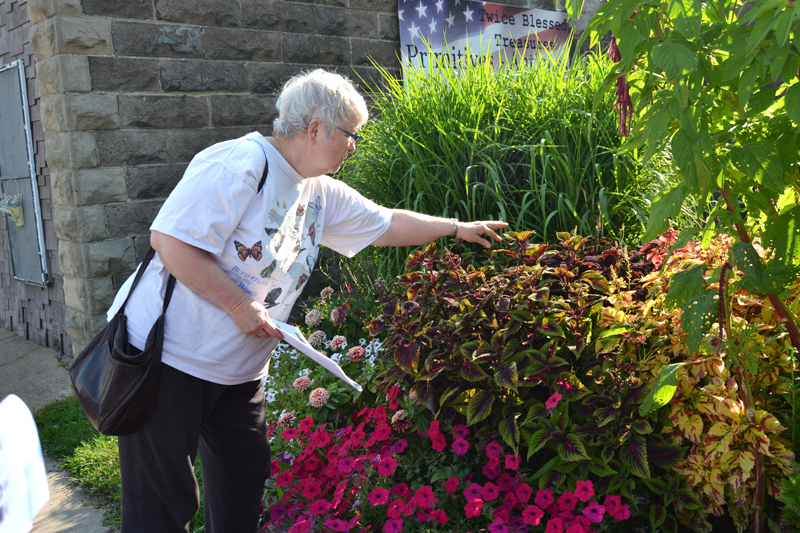 FLOWER GARDENS — Pat Eggert, a member of the Colfax Woman’s Club, points out plants in the flower garden at Tower Park. Every year, Eggert and Mary Packer, also a member of the Colfax Woman’s Club, plan the gardens in Tower Park according to a theme, purchase the flowers and plant them after Memorial Day. This year’s themes are “fireworks” for the bed on the south side of the park, and “sunshine” for the bed closest to the Colfax Municipal Building. —photo by LeAnn R. Ralph

COLFAX  —  When was the last time you stopped at Tower Park in Colfax next to the Colfax Municipal Building?

Did you notice the raised flower beds on the east side of the park toward the street?

Did you know that each year the flower beds are planted according to a theme?

Pat Eggert and Mary Packer, members of the Colfax Woman’s Club, talked about their adventures in planting the flowers in Tower Park August 6.

Their talk was sponsored by the Colfax Public Library.

“Mary and I are partners in crime in the flower business,” Eggert said.

“The Woman’s Club started this park in 1986. It was going to be a parking lot. They thought they’d better make a park out of it so it wouldn’t become a parking lot,” she said.

“They had to decide where to put the flower beds, and the original idea was to have the two we’ve got now, plus along the building (on the south side of the park) and in various other places,” Eggert said.

Tower Park turned out to be a perfect place for flower beds. On the street side of the park, the beds receive almost full sun, and the park has the advantage of access to water from a faucet at the municipal building.

“The number one consideration is water. Is there access to water where you can get it easily to keep the flowers watered,” Eggert said.

Although the original plan was to have flower beds extending east to west along the south side of the park as well, the building next door provides too much shade for a flower garden.

Flower gardeners talk about flower gardens having good “bones” — that is, permanent plants to give structure around which to build the rest of the garden.

The “bones” in Tower Park are the yew bushes in each bed, lilies and clumps of grasses (Miscanthus flame grass).

Eggert trims the yew bushes every summer, and the lily bulbs are thinned periodically, while the flame grass must be kept from spreading and filling up the whole flower bed.

“You have to consider whether your flower bed has good structure. The yew bushes provide structure. And they are tough. They sat out on the sidewalk when they were doing some work here a couple of years ago, and they survived,” Eggert said.

Every year, Eggert and Packer select a theme for each bed.

Once the theme is determined, they must decide on a budget. This year the flowers and the mulch came to a total cost of $234.

“I always like to have a theme. Pat always has it all sketched out, which size and height we need and how much they spread,” Packer said.

The basic premise of a flower garden is to have the taller plants in the middle (36 to 60 inches tall), then some shorter plants (24 to 36 inches), followed by a little bit shorter plants (12 to 24 inches) with small plants, or even ground cover plants (4 to 12) inches on the outside edges.

Eggert and Packer always make sure they have one unusual plant in the gardens each year to provide interest.

This year, the “interest” plants are the very tall “Love-Lies-Bleeding,” an amaranth with long streamer-type magenta-colored flowers, and the Popcorn Cassia, a legume from Africa that is common in areas where the soil is disturbed but is an ornamental plant in the rest of the world.

The Popcorn Cassia has yellow flowers and smells like popcorn.

The north bed, in addition to the Popcorn Cassia, has bright yellow pansies, zinnias, marigolds and snapdragons. The bed also has Stonecrop Sedum and Lime Time Coleus.

The Love-Lies-Bleeding in the south bed looks like a certain kind of fireworks with its long streamers of flowers. The Swizzle Cherry & Ivory zinnias look like bursts of fireworks. Other flowers in the bed are red, white and blue, such as the Tidal Wave Cherry petunias and the Tidal Wave Silver petunias, along with Finger Paint Coleus and Pistachio Nightmare Coleus.

Many flower gardens will have plants that are all the same height, Eggert and Packer noted.

“You have to have a variety of sizes to give more interest,” Eggert said.

Shopping for the flowers can be an adventure, too.

“But then when you find it, don’t walk out and leave it there because then you can’t figure out which greenhouse you saw it in, because you’ll be saying, ‘I know I saw it in a greenhouse somewhere but where was it?’” Packer said.

“You also have to figure out how many plants you need to buy, and that can be difficult,” Eggert said.

The most expensive plants are the big plants in the middle of the flower gardens, and they usually only buy one or two of those for each flower bed.

“The amaranth is probably a little bit tall, and it probably has a little more presence than I had anticipated,” Eggert said.

Once the shopping is completed, Packer and Eggert plant the beds after Memorial Day to avoid frost. They use cocoa bean mulch because it composts down into the soil over the season.

Members of the Colfax Woman’s Club take turns watering the beds on a weekly schedule.

Eggert took over the planning and planting of the flower gardens in Tower Park from Dorothy Conrad.

Dorothy was president of the Colfax Woman’s Club many years ago.

“When Dorothy left, I inherited the job,” Eggert said.

Eggert keeps all of the planting diagrams in a folder going back to 1995.

Every year, she painstakingly draws out the planting diagrams for each garden.

“You need drama (in the gardens). That’s what we strive for,” Eggert said.

“Knock on wood, but we haven’t had much vandalism. Although there was one year someone came through and pulled up the lilies,” she said.

Packer has many other ideas for themes to use in the Tower Park flower gardens.

“And we could plant a little thyme in there for a joke,” Packer said.

Other ideas include a perfume garden (sweet pea and lavender); a storybook garden, such as Wizard of Oz (sunflowers, a scarecrow, a yellow brick road); an ABC garden (A is for aster).

A butterfly garden is another possibility.

On the day Packer and Eggert talked about the flower gardens, a honey bee was busily visiting the snapdragons.

“I have always thought it would be fun to do a white garden. Those are really striking at night. A moonlit garden. We’d still have the lilies, but you’re never really all white. You’ve got the green,” Packer said.

Last year, one of the flower beds was a Crayola garden with all kinds of bright colors.

“One year we did the metallics — gold, silver, brown. It looked very pretty, but it was very subtle,” Packer said.

“There are endless themes. Many of the themes are along the lines of children’s gardens. We have a lot to choose from,” she said.

The Colfax Messenger suggested when Eggert and Packer have decided upon a theme for the flower gardens next year, they should let the newspaper know so the themes can be published ahead of time.

That way, we’ll all know what to look for in the Tower Park flower gardens.