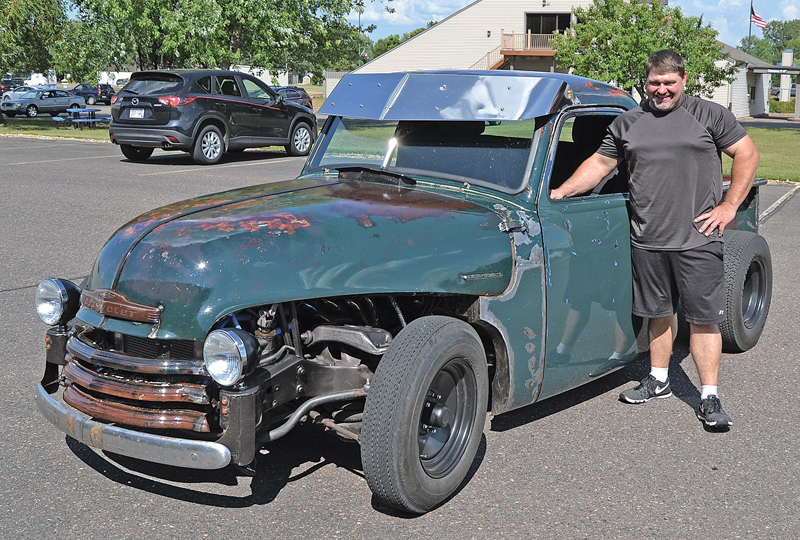 RAT ROD — Adam Wedlund of Colfax has built a rat rod out of a Chevrolet Astro Van and a 1949 Chevrolet pickup truck. The engine is electronic, and the gauges are digital and connect to Wedlund’s cell phone via Bluetooth. —photo by LeAnn R. Ralph

COLFAX  —  What do you get when you cross a Chevrolet Astro Van and 1949 Chevrolet pick-up truck?

Adam Wedlund of Colfax says he gets more “looks” and comments about his rat rod than he does about the classic car he has restored.

Then again, Wedlund’s rat rod is not a restoration — it is a combination of components and more of a rebuild and a repurposing of a variety of parts.

Wedlund’s Astro Van/1949 Chevy truck rat rod has a 2007 engine that is all electronic.

Wedlund built as many of the components for the vehicle as he could.

Building your own components and figuring out ways to make different components work together also is a feature of rat rods.

The gauges inside Wedlund’s vehicle are all digital and connect to his smart-phone by Bluetooth.

And instead of painting the 1949 Chevy truck shell, Wedlund covered it with clear-coat so it has a shiny look to the surface while at the same preserving the worn spots, the rust streaks and the nicks and dings it has acquired over the past 70 years.

“This way you can lean against it and not get rust all over yourself,” Wedlund said with a grin.

One step that remains is to put glass back in the doors.

The original 1949 Chevy truck had doors with the little wing windows in the front corner.

Wedlund found a different door at a junk yard, but when he got it home, he discovered it was only the shell of the door. He went back to the junk yard, and the owner was going to swap out one door for another, but Wedlund decided the steel could be useful. He welded a piece of “junk” door between the driver’s door and the engine compartment of the 1949 Chevy to fill in the space.

You can still see the welds — Wedlund just clear-coated over them.

The bed of the truck is a work of art as well — woodworking art, that is, with black wrought iron strips.

Wedlund, who works as a diesel mechanic on Mack trucks, says he has put four years into building his rat rod.

The vehicle, perhaps surprisingly enough, gets 18 miles to the gallon.

“The beauty of building a rat rod is you try to build it as cheap as you can,” Wedlund said.

Wedlund estimates he has spent about $5,000 building the rat rod.

By contrast, restoring a classic car can cost up to $15,000 or maybe more, depending on the make and model and how much of the restoration is made up of original components.

Now that building rat rods has become more popular, Wedlund says you can find items on the Internet for sale intended especially for rat rod builders.

The problem is, he said, when the items are specifically intended for rat rodders, the price increases proportionally.

And that’s not the point.

“The point is to build it as cheap as you can,” Wedlund reiterated.

The point also, it seems, is to have as much fun as you can.

So, if you see a vehicle on the road in Colfax or the vicinity, and you’re not quite sure what it is, but it looks somewhat like a low-to-the-ground dark green 1949 Chevrolet pickup truck, it just might be Wedlund.