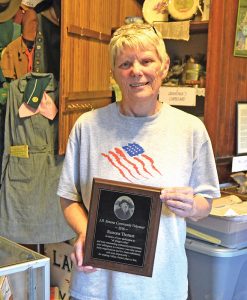 J.D. SIMONS COMMUNITY VOLUNTEER FOR 2018 — Ramona Thorson of Colfax was awarded the 2018 J.D. Simons Community Volunteer award for 2018 at the Colfax Founder’s Day celebration August 4. The plaque reads “In honor of your dedication to ‘all things Colfax’ and your outstanding community involvement, your willingness to volunteer across many organizations and for many individuals, and most importantly — for making Colfax a better place to live.” —photo by LeAnn R. Ralph

Thorson was nominated for the award by the Colfax Woman’s Club.

According to the nomination form, “The distinction of being the founder of Colfax goes to a man named John D. Simons. As a businessman and philanthropist, he was one of the most influential characters in the early history of this locality, and many a poor man could point to him as the man who ‘helped him out’ in time of dire distress.

“Beginning with Mr. Simons, there have been many business owners and residents that have carried on the values of volunteering, supporting and promoting the village of Colfax. In this spirit of volunteerism, the Colfax Commercial Club is seeking to recognize an ‘unsung hero’ in our community.”

“Mona is involved with many of the Colfax community organizations. She is very dedicated to Colfax. She has volunteered many hours to these organizations,” according to the nomination by the Colfax Woman’s Club.

Here is some of the information included in the nomination:

Mona has been a member of the Colfax Woman’s Club for 40 years and served as co-president for 10 years. Over the years, she has been in charge of many of the Woman’s Club activities.

A member at the Colfax Lutheran Church, Mona volunteers numerous hours at church, is president of the Ladies Aid and heads up many of the fundraisers, including “Junk for Jesus.”  She volunteers at the Grapevine Senior Center, too, and is a member of the Merry Mixers senior citizens group and serves as vice-president.

She also volunteers her time to provide transportation for area seniors, helps them clean their homes and provides much-appreciated social visits for those who are unable to get out as much as they might like.

Mona organizes the annual craft and lefse sale in the fall, too, held at the Grapevine on the opening Saturday of deer season.

In addition, Mona is a member of the Red Cedar Sounds Sweet Adeline’s chorus and devotes countless hours to that organization as well, including the Harvest of Harmony shows every fall, not only performing in the shows but also helping to build the sets and to decorate the Martin Anderson Gymnasium.

Mona has volunteered her time, too, on community committees, such as the nursing home’s fund-raising committee to build the new nursing home, the Colfax Sesquicentennial Committee to celebrate the village’s 150th birthday in 2014, the tornado commemoration committee in 2008 to mark the 50th anniversary of the June 4, 1958, tornado and the All-School Reunion committee for the 100th anniversary of Colfax High School in 2010.

Mona has held various jobs in the community, including working for a Colfax doctor, serving as janitor at Colfax Lutheran for 13 years, working at the school, and cleaning for the elderly.

The J.D. Simons Award reads, “In honor of your dedication to ‘all things Colfax’ and your outstanding community involvement, your willingness to volunteer your time across many organizations and for many individuals, and most importantly — for making Colfax a better place to live.”

Mona’s dedication to Colfax is such that she could never contemplate not living here.

“Why would anyone want to live anywhere else?” she says.