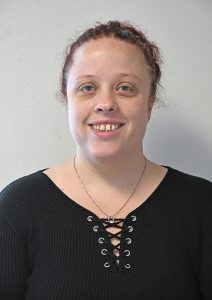 NEW STAFF REPORTER — Amber Hayden of Colfax has joined the Tribune Press Reporter and Colfax Messenger as a staff reporter.

I’d like to start by giving you, the readers, a little bit of background on myself, I feel it is always the best way of doing things when meeting new people.

I’m originally from California and have only been living here in Wisconsin since February of 2017, but the one thing I have noticed is how everyone is always friendly even if you don’t know them. It made the transition from such a busy place, to a very small town much easier than I had expected.

Which in turn made the adjustment for my daughter easier when she moved here in July of last year, she constantly says how nice it is that people just say “hi” for no other reason then just to say “hi”.

I have to credit a lot of my knowledge to Luanne and Dennis Flick for showing me around in Glenwood City, but a lot of my knowledge of the town and surrounding towns has come from dating their son Brad. He has shown me just how amazing the people and communities can be, and I look forward to getting to know more people by way of writing about the activities in each town.

When I’m not out taking photos for any random reason I can think of, mostly of the storms as they are rolling into Colfax, I spend a lot of my nights at home with our two dogs and my daughter who attends school in Colfax. But for the most part you can normally find me bowling at the local alley for league nights, in any 9-pin tournament that pops up on the weekends, or down at the softball fields watching the games.

As for writing, I’ll be covering sports, government meetings, as well as features when they come up. So any ideas or stories you have that you want to pass along you can email them to me at tribune@dewittmedia.com or at messenger@dewittmedia.com.