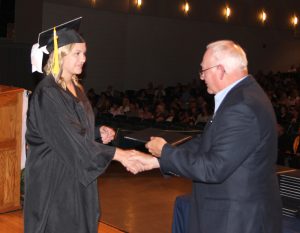 EAU CLAIRE – The students were unanimous in their agreement, even though what they were being asked to do amounted to a daunting challenge. They were one semester and a summer internship away from graduation from Chippewa Valley Technical College’s Radiography program.

They had been asked to start their internships early while still burdened by the work of their core classes, and finish by June 22 instead of Aug. 2. The 24 students agreed to take on the challenge, and their reward has been virtually all of the graduates finding jobs before their official graduation date. Four of them are now working at the new Marshfield Clinic hospital in Eau Claire, whose opening this summer created a great need for radiologic technologists.

Though they finished early, the 24 Radiography graduates were among 160 graduates in 30 programs honored at CVTC’s summer commencement ceremony Thursday, Aug. 2. Radiography was the largest group, while Manufacturing Quality program graduated 18, and Cosmetology, Diagnostic Medical Sonography and Welding each graduated 15.

“We had a discussion late last fall with Marshfield Clinic’s radiology manager on how many people he needed,” said Deb Kjelstad, CVTC Radiography program director. “He said he was going to hire 22 technicians and needed some boots on the ground by June 22. But we didn’t graduate until Aug. 2.”

Executive Dean of Health and Emergency Services Shelly Olson went to CVTC Vice President of Instruction Julie Furst-Bowe. “Julie said, ‘Meet the needs. Figure out how to get it done,’ ” Olson said.

“I went to the students and told them they all had to agree if we were going to do this.” Kjelstad said. “Not one of them hesitated.”

But they were a bit apprehensive.

“I was terrified,” said Cacie Michels, a 2007 Chippewa Falls McDonell graduate now living in Fall Creek and working at the new hospital. “I was pregnant when they told me. I never imagined that I would graduate sooner than August. We all had to agree, and we made it work.”

“I was pretty excited and suspicious at the same time,” said Chantell Harris, a 2008 Colfax High School graduate, who works at Mayor Clinic Health System’s Red Cedar facility in Menomonie. “There were stresses, but it was worth it and exciting to know we would all have a job when we got done.”

“At first I didn’t know if I would appreciate it, but if there were jobs out there I was all in favor of it in the long run,” said Sarah Koehler of Bloomer, who now works at Sacred Heart Hospital in Eau Claire.

Students had to start their internships April 30 instead of June 11, and it meant they would get no break after the end of spring semester classes, Kjelstad explained.

“We had to communicate with the internship sites early on,” Olson said. “We worked with 18 different sites, and it affected more than the interns. This was unprecedented, but we had a lot of help, and the students really buckled down.”

“It was absolutely important that CVTC recognized the need and accelerated the program,” said Kristian Monson, regional radiography manager for Marshfield Clinic. “Almost everyone we brought in at radiology came through the CVTC program at some point. They are from the region and want to stay in the region.”

But the need for CVTC to produce the graduates early extended beyond Marshfield Clinic. The 2018 CVTC graduates filled openings created throughout the market.

“The acceleration of CVTC’s program was critical for us,” said Ken Brown, director of imaging for Hospital Sisters Health Systems, which hired four graduates for Sacred Heart Hospital and St. Joseph’s Hospital in Chippewa Falls. “The market was very tight and we were having a hard time recruiting. CVTC’s action was very beneficial to our ministry and the patients we serve. CVTC does such a good job of turning out top-notch students.”

“I am a Marshfield Clinic patient, and my children too,” said Michels, who sought out a position at the new Marshfield Clinic hospital. “I know the standards of care they have. It’s amazing here. I never imagined I would graduate and start a full-time job in a brand-new facility.”

“It was really worth it,” said Harris, who also works at Chippewa Valley Orthopedics and Sports Medicine. “I liked the clinicals and the internship experiences. It was very hands-on working directly with patients.”

“There were a lot of tears and sleepless nights, but our instructors were very helpful and in the end it all paid off,” Koehler said.

With over 90 programs and both online and on-campus classes, Chippewa Valley Technical College delivers superior, progressive technical education which improves the lives of students, meets the workforce needs of the region, and strengthens the community. CVTC programs are designed with input of business and industry to prepare graduates for today’s jobs, with 94 percent employed within six months of graduation and associate degree graduates earning an average annual salary of $43,000.