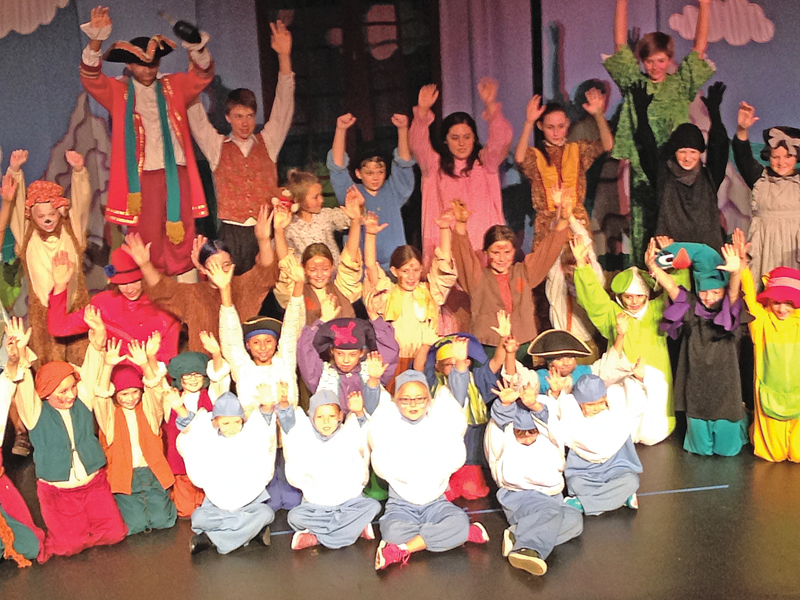 MISSOULA CHILDREN’S THEATRE — The Missoula Children’s Theatre will be in Colfax the week of August 13 to put on the play “Blackbeard the Pirate” with local youth ranging in age from entering first grade through high school. This photograph is from the Missoula Children’s Theatre production of “Peter and Wendy” in Menomonie last summer. The MCT plays have parts for up to 60 children. —photo submitted

COLFAX  —  Between 50 and 60 children ranging in age from entering first grade through high school are needed for the Missoula Children’s Theatre production of “Blackbeard the Pirate.”

The Missoula Children’s Theatre is being sponsored by the Colfax Municipal Building Restoration Group.

Auditions will be held August 13 at Colfax Lutheran Church, and the week-long event will culminate with performances of “Blackbeard the Pirate” in the Colfax Municipal Building Auditorium August 17 and 18.

“I was a cloud, and they based (the part) on your age,” Megan said.

The play was “Peter and Wendy” (Peter Pan).

Megan says one of the aspects of the play she really enjoyed is that “everybody got a line” to perform on stage.

Not knowing how many people will show up up for the auditions at Colfax Lutheran, Megan says she’s not sure everyone will get a line, but she knows everyone who participates will have fun.

“She was one of the youngest ones, and the youngest group were clouds,” said Megan’s mother, Carrie Christensen.

Even though being a cloud was a smaller part, “I got to go on six times!” Megan said.

“The plays are written so that everyone gets an opportunity. Even the smallest parts allow the kids to feel special,” Carrie Christensen said.

Megan loved her costume, too. “Everybody wished they had the costumes we had. We had blue pants, and a blue shirt, and you had this extra thing that made you look like a cloud (a poofy white thing).”

The first part of the audition involved the participants communicating their ages.

“So they could move us around and know where to put us,” Megan said.

“And from age, she divided us into us six groups. And then in your group, they’d ask you to do something. If you were scared, they would tell you the lines to say,” she said.

Auditioning was not at all frightening and in fact was “pretty easy,” she said.

Megan said she was not required to be at play practice the entire week. “If you were a main person, you would have to go all of the days. But the clouds were only there for three days. Everybody had to memorize their lines,” she said.

“If you didn’t know the line, you’d have to ask for your line. The day before the performance, they didn’t tell lines. It was like you were really putting on a play,” Megan said.

The performance of “Peter and Wendy” was at the Mabel Tainter Center for the Arts.

“It was my first time,” Megan said — both for the performance at the Mabel Tainter and for being in a play.

Megan said while she did not know any of the other children, they got to know each other during auditions and rehearsals, and she would most definitely recommend Missoula Children’s Theatre to others.

When asked if she was going to audition for “Blackbeard the Pirate,” without hesitation, Megan said, “Yes!”

“As a teacher, I was super-impressed with the organization. It was so efficiently done. But as a parent, it was so awesome for my kid to have that experience and have it only be a week. Normally, a play is six to eight weeks, whether it’s community theater or a high school play, so to have that experience of being on stage, and to have it be a quality experience and have it be one week — it was awesome,” Carrie Christensen said.

“I honestly was so in awe of the process,” she said.

The other aspect of Missoula Children’s Theatre the Christensens appreciate is it offers opportunities to children at so many grade levels.

“You can be in any grade but pre-K,” Megan said.

“Going into first grade and on up,” Carrie Christensen said.

The show Megan was in, “Peter and Wendy,” ended up with many of the participants from the upper elementary grades and middle school.

“For kids to be able to participate in Colfax for $25, that’s really awesome the Municipal Building Restoration Group is providing the opportunity,” Carrie Christensen said.

The Colfax Municipal Building Restoration Group is sponsoring the Missoula Children’s Theatre production in Colfax as a way to make it possible for children to be on stage in the historic auditorium.

“They really do bring the set, the costumes, and they direct,” Carrie Christensen said.

“It’s not just another activity. The way they structure it to make everyone an important part. Everything is done with intentionality. Even how they hand out the scripts. It’s done in a certain order,” she said.

“Whatever your situation, whatever your facility, they will deal with it. Even to the point of, they’ve got such great management, at least the play we were involved in last year, they’ve got 50 kids there, but it’s so well managed … the expectations are high from the start, and it works,” Carrie Christensen said.

Also, “if you don’t want to be on stage you can help with other things. You could be a stage manager,” Megan said. ​

“It truly is unique in that it gets off the ground so fast,” Carrie Christensen said.

“If they’re only needed for two hours (for rehearsals), they are only there for two hours, and they are not sitting around doing nothing,” she said.

Auditions for “Blackbeard the Pirate” will be held on Monday, August 13, from 9 a.m. to 11 a.m., at Colfax Lutheran Church at 601 Balsam Street (from Main Street, turn on East River Street; the Colfax Arts & Antique Mall and the Colfax Pharmacy will be on the opposite side of the intersection).

Those who wish to audition must arrive on time and stay for the entire two-hour session. The first rehearsal for “Blackbeard” will begin 15 minutes after the auditions.

There is no cost to audition, but when children are chosen to participate, there is a $25 fee per child.

No advance preparation is needed to audition.

Rehearsals will be at Colfax Lutheran Church on Monday, August 13, after the auditions, and then again on Tuesday, August 14, and Wednesday, August 15, from 9 a.m. to 1:15 p.m.

The Missoula Children’s Theatre touring productions are complete with costumes, scenery, props and makeup. MCT Tour Actor/Directors will conduct the auditions and rehearsals.

Assistant Directors also will be cast to help with rehearsals throughout the week and to take on essential backstage responsibilities.

After all of the hard work of auditioning and rehearsing for the Missoula Children’s Theatre production of “Blackbeard the Pirate,” the public will have an opportunity to attend three performances of the play.

For more information about “Blackbeard the Pirate” you can contact Troy Knutson, event coordinator for CMBRG, at 715-962-3027 or send an e-mail to knutson.troy@yahoo.com.