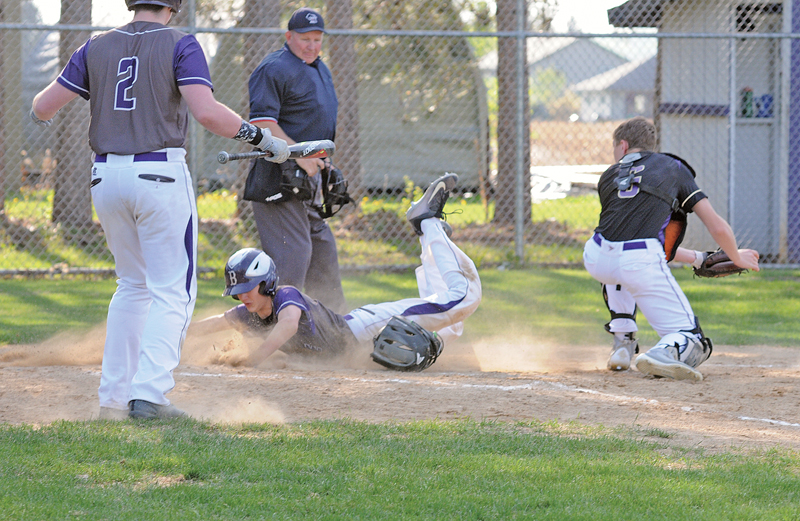 BELLY FLOP AT HOME — Freshman Walker Retz threw himself head-first toward home plate in last Thursday’s home contest against Durand. Walker beat the tag of the Durand catcher to score a run. Boyceville won the game 11-5 to gain a share of the D-SC title with Durand. —photo by Shawn DeWitt

BOYCEVILLE – The Bulldog baseball team captured the conference title- or at least a share of it when they beat number one Durand on Thursday, May 17th. Durand has one more conference game on Monday, May 21st against Elmwood/Plum City. Should last place EPC upset Durand, Boyceville would be the outright champs. As it is this is the first conference championship for the Bulldogs since 2012.

The road this week to get to that title started with a win over Glenwood City on Monday, the 14th (please see related article for details of that game). After defeating the Durand Panthers, the Bulldogs took on Shell Lake on Friday, May 18th and easily won, 11-0. These three wins increased their winning streak to seven.

About the game, Coach Michael Roemhild stated “We knew what to expect from Durand, but we also knew we weren’t the same team that played them the very first game of the season.  We have really been hitting the ball well, running the bases aggressively, pitching great, and playing sound defense.  Tonight was no different.”

The teams traded runs for the first two innings with each scoring one run in each inning. After the Panthers went three and out in the top of the third, the Bulldogs exploded in the bottom half of the inning scoring five runs, thanks in part to singles from Garrett Joles, Luke Knudtson, Walker Retz, Cooper Boesl, Bryce Boda and Trett Joles.

The Panthers then started the seventh inning with a solo home run and added two more runs before subsiding to the Bulldog defense. The Bulldogs were victorious with a 11-5 win.

I think it is safe to say that Coach Roemhild and his team were beyond happy with this win. Roemhild couldn’t say enough nice things about his team; “Offensively I think this was one of our best of the season. Everybody either got a hit or drove in a run. When we got on the bases we ran and ran smart.  We had 10 stolen bases and were taking advantage of any extra throw they had to make.”

And as for the defense, Roemhild had this to say; “Defensively we made the plays we were supposed to make.  It gives our pitchers confidence when they know the defense had their back.” He goes on to compliment his pitchers by saying “We said Boda was going to give us 5 good innings and that Trevor [Hollister] was going to come in with his speed and finish the game, and that is exactly what those two gave me.  I thought Bryce [Boda] pitched one heck of a game” 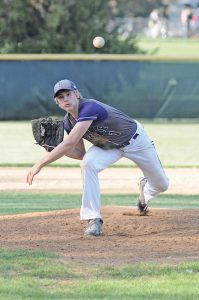 On Friday night the Bulldogs hosted Shell Lake. For the fans (and players) it was a short evening as the Bulldogs easily won in just five innings of play. Coming off their big win against Durand the night before, the momentum carried through and the Bulldogs soon found themselves up by five after the first inning. The Bulldog sluggers had five hits in the first inning including doubles from Garrett Joles and Kyle Holden.

After Shell Lake went three and out in the top half of the second, the Bulldogs responded with three more runs in the bottom half of the inning. Thanks in part to three singles and a double from Walker Retz.

It was another three and out inning for Shell Lake in the third and an additional three runs for the Bulldogs. Three singles in a row from Brenden Sempf, Bryce Boda, Trett Joles and another double from Garrett, now gave the Bulldogs an 11-0 lead. And as they say that was all she wrote as the rest of the game remained scoreless. Being 10 runs ahead after five innings the mercy rule was in play and the Bulldogs won their third game of the week.

Coach Roemhild complimented pitcher, Walker Retz, saying “Walker pitched a great game, striking out 5 while only walking 1. He only faced 19 batters for the complete game shutout in 5 innings.” Roemhild goes on to compliment his whole team saying; “We played error free baseball behind him, and nobody took any extra bases on us, being that they only had 4 guys reach base safely.”

With 14 team hits and 9 stolen bases the Bulldogs continue to be aggressive on offense. “I thought we played a really sound game both ways.  It was good to see these guys come out focused after a big win the night before.” Remarked Roemhild.

The Bulldog sluggers have two non-conference games this week. They played Prairie Farm at home on Monday the 21st and will travel to Clear Lake on Thursday the 24th. With a first round bye in the playoffs, the Bulldogs start their post season play at home on Tuesday, May 29th. Boyceville is the #2 seed and will face off against the winner of #3 Elk  Mound and #6 Glenwood City.