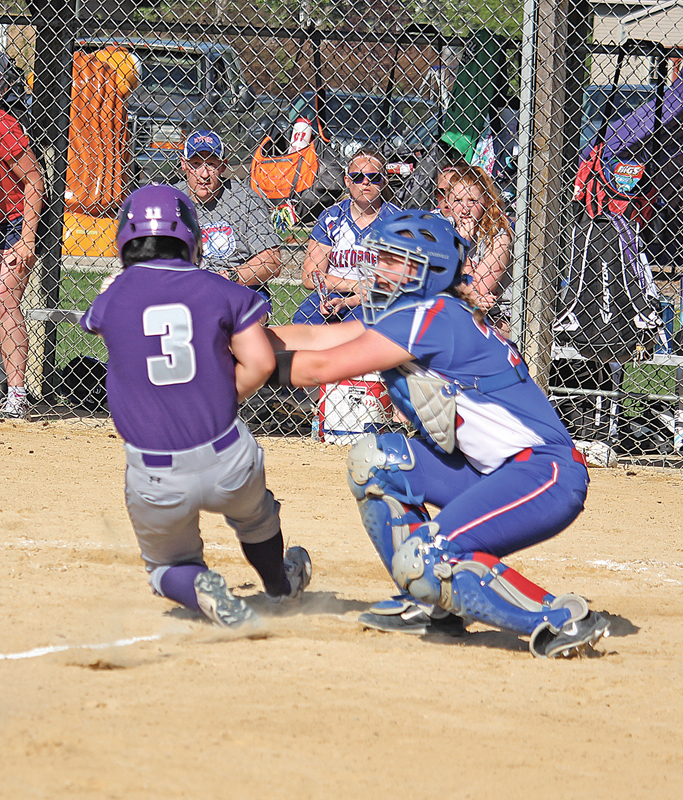 NO SCORE — Glenwood City freshman catcher Delaney Fayerweather (right) tagged out Boyceville runner Kanako Nokomoto as she tried to slide into home plate. Fayerweather not only kept the Bulldogs scoreless with the play but she went 3-for-4 hitting in the May 15 softball game with a pair of RBIs in the Hilltoppers’ 3-0 win over the rival Bulldogs in Boyceville. —photo by Missy Klatt

BOYCEVILLE -– The Lady Bulldogs played host to the Hilltoppers on Tuesday, May 15th on a beautiful spring afternoon. When the local rivals met on the softball field they each had different agendas. For the Hilltoppers they were looking to redeem themselves after an earlier loss to the Bulldogs.  For the Bulldogs a win would have meant a share of the conference title. Unfortunately for the Lady Dawgs they fell short in their quest, as they fell to the Hilltoppers 3-0.

The first two innings were definitely a pitching battle as both Maggie Wallin, Glenwood and Tyra Kostman, Boyceville had four strike outs.

The top of the third was either good or bad depending on which team you were rooting for, as all the game’s runs were scored in this inning. Boyceville head coach, Jamie Olson admits “We had a couple of errors in the 3rd that allowed 3 runs.”

For the Toppers Mariah Voeltz was the first to get on base in the third due to one of those errors. She was then able to steal second before Jenesa Klinger got on first with a single. With two on base Delaine Fayerweather took a one and one pitch and turned it to a big single driving in two runs. Emily Hill was then out on a fielder’s choice at first.

With Fayerweather in scoring position Maddie Oehlke doubled to drive in the third and final run of the inning.

The Bulldogs came back in the bottom of the third looking to challenge as Kanako Nakamoto and Jadia Peterson were soon on base due to Topper errors. Kylie Krueger then hit a single to centerfield for a base hit to load the bases. Unfortunately the Bulldogs hit into a double play when Amber Retzloff hit a fly ball to left fielder, Courtney Lawson and Nakamoto was tagged out as she tried to make it home from third. Marissa Dormanen then hit into a fielder’s choice to end the inning. 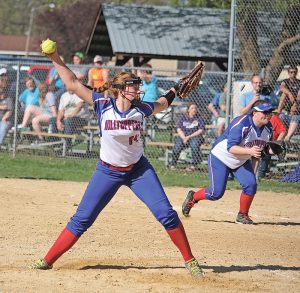 THE WIND UP — Glenwood City pitcher Maggie Wallin prepared to deliver a pitch during a May 15 game against rival Boyceville at Pafko Park. Wallin threw seven innings of shut out ball and allowed the Bulldogs just three hits and struck out ten batters to help lift the Toppers to a 3-0 victory. —photo by Missy Klatt

With two outs at the top of the fifth, the Toppers were looking to add more runs when Fayerweather and Emily Hill had back to back singles. However Kostman put an end to their drive when she struck out Oehlke.

Then in a similar situation in the bottom of the sixth inning the Lady Dawgs looked to put up some runs with two outs. Kostman and Hannah Johnson had back to back singles but were left stranded as Wallin struck out McKenna Weber.

In the top of the seventh, with one out, Fayerweather picked up another hit but the inning was soon over with two more quick outs. And as for the Bulldogs last attempt, Wallin struck out the first two batters and the third flied out to right field.

After the game, Glenwood head coach, Matthew Schutz stated, “We played great defense despite a few errors/mistakes.  We recovered fast from them.  Maggie Wallin pitched a great game only allowing three hits.”

As for the host team, Olson said “We played flat, and didn’t get the bats going at all.  I give Wallin credit for pitching a great game and Fayerweather came up with some big hits for them. We weren’t able to carry the same intensity from the night before and it showed in our performance.”