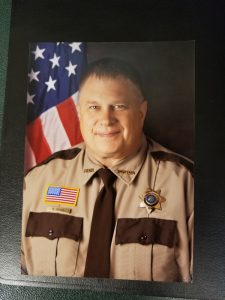 Deputy Dicus, who is running as a Democratic candidate, is the third person to declare his candidacy for Dunn County sheriff in the November 6 election.

The candidates have until 5 p.m. June 1 to file nomination papers with a sufficient number of valid signatures.

If Zukowski and Bygd submit the needed signatures, they will be on the ballot for the partisan primary August 14.

According to a news release from Dicus, he was born and raised on the family farm in Ladysmith, the fifth of eight children, where his parents instilled in all of them the value of hard work and the importance of honesty and integrity.

Those core values, he said, have stayed with Dicus while he has lived and raised his family in Dunn County for over 32 years.

He has been married for 26 years to his wife, Linda, and they have two adult children. They are also members of Trinity United Methodist Church of Elk Mound.

In 1985, Dicus graduated from Mount Senario College with a Bachelor of Science degree in Criminal Justice. While in college, he participated in football and baseball, which he says enabled him to further develop his leadership and teamwork skills.

Dicus says he is proud he was able to pay for most of his college education by working during the summers and through Mount Senario’s work study program, which afforded him the opportunity to tutor other students, and these jobs reinforced his hard work ethic and his desire to help others — two qualities that have benefitted him during his law enforcement career.

Dicus’s career began in April of 1986 as a dispatcher and a jailor for the Dunn County Sheriff’s Office. From there he went to the patrol division. In 2007, he became a D.A.R.E. Officer, community services officer, and was assigned to the role of investigator, where his primary assignment was child protection.

“All of these various assignments have helped me shape into the officer I am today,” he said.

In 2014, Dicus was the recipient of the D.A.R.E. Officer of the Year Award for the state of Wisconsin. Serving as a D.A.R.E. officer and in his role as a community services officer has provided him with many opportunities to engage with citizens, including at the Dunn County Fair, Women’s Pheasants Forever, United Way and numerous events within the Dunn County school districts.

Dicus said it has been his personal mission since starting with the Dunn County Sheriff’s Office to work as hard as possible to protect and serve the citizens of Dunn County in an attempt to make it a better and safer community. Since working as a child protection investigator, he has been part of teams that have convicted several felony offenders for serious child crimes.

Dicus said there are many issues currently challenging members of the community that will be the focus of his attention, including mental health, school safety, property crimes, and the abuse of illegal and prescription drugs.

“Furthermore, I believe it is important that all employees of the Dunn County Sheriff’s Office conduct themselves in a professional manner — on and off duty — to set an example for the citizens of Dunn County,” he said.

“My parents taught me at a young age the importance of leaving a positive impression on people I work with. I believe I have done that during the last 32 years as an active community member, as a coach of youth sports, and as a D.A.R.E. and law enforcement officer within Dunn County,” Dicus said.

“If you are looking for an experienced, ethical and hardworking individual to lead the Dunn County Sheriff’s Office, I would please ask that you vote for Rod Dicus for Dunn County Sheriff. I still believe that values matter and character counts,” he said.