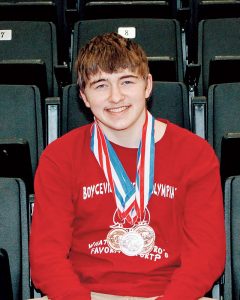 BOYCEVILLE  — Boyceville High School senior Jason Swanepoel never thought he had a chance to be accepted at Stanford University.

When asked if he was surprised to learn of his acceptance, “surprised is an understatement,” he said.

“I had just made plans to visit another college which I would have eventually attended. Stanford was my ‘reach school’ and my dream school but I did not think I had a chance with Stanford’s extremely low acceptance rate of just around five percent,” said Jason, the son of Scott and Dawn Swanepoel.

Stanford University, located in Stanford, California, opened in 1891 and has more than 16,000 students and 2,180 faculty members.

Stanford is known for academic strength and the proximity to Silicon Valley.

Among the famous alumni from Stanford are William Hewlett and David Packard, who in 1939 developed a low-cost method of measuring audio frequencies and who founded the Hewlett-Packard Company in Packard’s garage.

Doctors at Stanford completed the first successful heart-lung transplant in 1981, and in the same year, also used specific antibodies to treat cancer.

In 2000, Professor David Kennedy won the Pulitzer Prize in history for “Freedom From Fear: The American People in Depression and War 1929 to 1945.”

Applying to Stanford University required answering a set of questions as well as writing an essay, Jason said.

Each of the colleges required answers to essay questions, a personal essay, teacher recommendations, ACT scores and the FAFSA profile, Jason said.

Jason plans on majoring within the College of Earth, Energy and Environmental Sciences as Stanford.

“I have an interest in geology,” he said.

Stanford has “an entire college for earth sciences which provides me more room for changing my major if I choose to do so,” Jason said.

Stanford has “an ethos of new horizons and new money in contrast to the old money of the Ivy League,” he said.

Another aspect of Stanford Jason appreciates is the climate.

“It does not snow there so one can easily avoid seasonal depression. And the financial aid package at Stanford makes it cheaper for me to attend Stanford than nearly any other school, even tech schools and community colleges in Wisconsin,” he said.

Jason has visited the Stanford campus and describes it as “impressive.”

“The campus is huge. Palm trees were different. The architecture of the buildings was impressive. And the weather was great. There was no snow,” he said.

Jason says the Advanced Placement classes offered at Boyceville High School have influenced him the most, with Contemporary American History and Civics being two of the most especially influential classes.

“Taking high level classes such as Contemp, AP Physics, AP Biology and AP Chemistry, and more, have pushed me to go beyond what I know I can learn,” he said, adding that Contemporary American History taught him to write and the AP classes helped him to develop better study habits and math skills.

Regarding teachers and activities, “Mr. Hamm and Science Olympiad have had the greatest impact,” he said.

In addition to Science Olympiad, Jason was active in wrestling, football, and Visual Arts Classic.

“Science Olympiad would have to be my favorite. Without Science Olympiad I would not have learned how to be an independent learner nor would I have taken an interest in earth science,” he said.

From kindergarten through second grade, Jason attended school in Glenwood City and then he and his family moved into the Boyceville school district where Jason has been a student ever since.

One memorable experience during his school career, Jason said, was, surprisingly enough, learning about pineapple.

“Learning that pineapples, contrary to popular belief, actually grow in the ground (on plants) and not in trees truly astonished me and my AP Biology class,” Jason said.

During his first year at Stanford, Jason is looking forward to a variety of experiences.

“I look forward to the food, the weather — I won’t miss snow in May — the interesting people and discussions, and even the challenges I’ll face in trying to catch up to my peers,” he said.

When asked if there was anything else he would like people to know, Jason had a simple, one-word response: “Nah.”