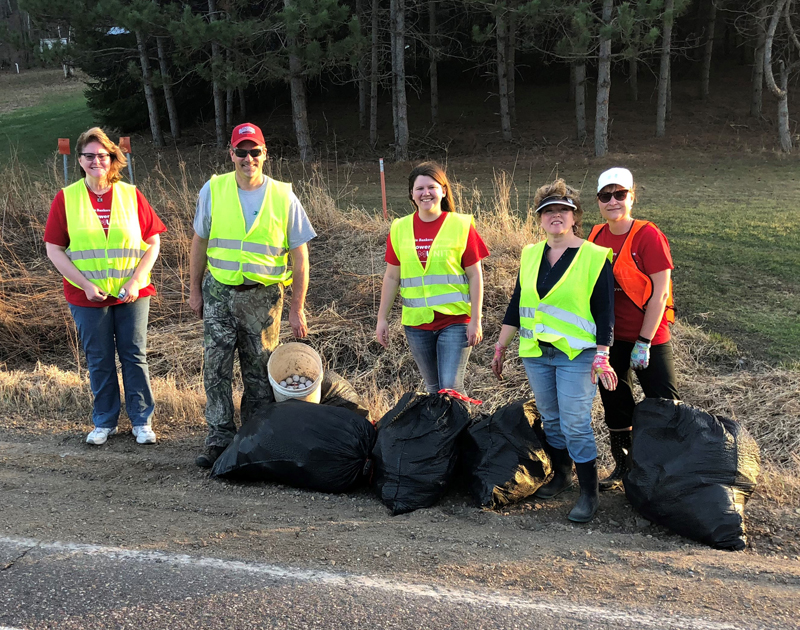 FOR A new initiative called Power of Community Week, employees at each of Dairy State Bank’s 12 locations were challenged to complete a community service activity during the week of April 16 -21, 2018. From left, Debbie Gillette, Clark Yolitz, Taylor Krall, Jodi Carr and Stacy Medin had to postpone their Hwy 40 clean-up project until the snow melted. —photo submitted

COLFAX — Dairy State Bank employees were among hundreds of Wisconsin community bank workers who came together the week of April 16, 2018 to serve in dozens of community service projects as part of an initiative called Power of Community Week (POC).

Some of Dairy State Bank’s Colfax employees were forced to put off their community service project—cleaning up Hwy 40 from the golf course south to Hwy E—until just this week. Others helped at the Dunn County Humane Society thrift sale in Menomonie held during POC Week.

“Many of our employees belong to civic clubs, serve on non-profit boards or volunteer for non-profits throughout the year. For Power of Community Week, we challenged every employee, at all twelve of our locations, to participate in an extra volunteer activity during the week of April 16 through 21. Nearly 100 percent of our staff were able to do that,” says Mike Bock, CEO of Dairy State Bank. “We all wore red Power of Community T-shirts while volunteering and at work. We received great questions from customers about why we were wearing matching T-shirts and what the difference is between a community bank and other types of financial institutions.”

Community bank employees are involved in community service organizations and projects throughout the year. Wisconsin Bankers Association (WBA) launched POC Week during Community Banking Month to help community banks illustrate the collective impact they have on their communities.