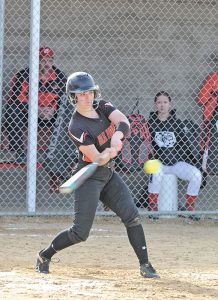 BIG HIT — Mounders’ senior Allison Lindquist hit this RBI-double in the sixth inning of her team’s softball game against the rival Vikings in Colfax last Thursday, May 10. Lindquist’s shot gave Elk Mound a 3-0 lead at the time. The Mounder held on for a 3-1 victory. —photo by Shawn DeWitt

Any time rivals clash, you can throw the records and predications right out the window.

The Mounders along with Boyceville are just a half game behind front-running Pepin/Alma in the championship chase.

But the Lady Vikings and sophomore pitcher Jozie Buchanan were neither intimidated by their rivals nor  their record.

But in the end, Hallum and Elk Mound squeezed past Colfax winning 3-1.

“Clare (Hallum) pitched very well for them as we struggled to hit her change,” added Dickinsen. “She was able to get out of some very tough situations which would have been game changers if we could have scored a run or two along the way.”

Buchanan did her best to keep her team in the contest allowing the Mounders just two hits in the first five frames with no walks.

On the offensive side, the Vikings collected four hits and three base on balls during that span but could not turn them into runs.

Colfax came close in the bottom of the second when it had runners at second and third with just one out. But a strike out and ground out ended the threat and inning.

In the third, the Vikings loaded the bases with no outs only to have the next three batters fly, strike and bounce out to end the threat.

Then in the top of the fourth, it appeared the Mounders were going to score the go ahead run but a fantastic throw from the Vikings’ left fielder Taylor Irwin allowed catcher Kameri Meredith to tag out Hallum as she tried to slide into home plate.

The Mounders finally broke the scoreless deadlock in the top of the sixth with four straight hits off of Buchanan including a double by senior Allison Lindquist.

Orianna Horel, Sophie Cedarblade and Hallum singled off Buchanan to start the sixth. Hallum’s hit brought in Horel and Cedarblade for a 2-0 lead.

Tamara Huffman made a great over the shoulder catch in center to prevent a long fly ball by Hallum that would have likely added to the Mounders lead.

It remained a 3-run contest until the Vikings’ final at bat in the bottom of the seventh. 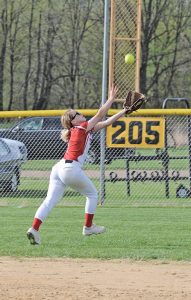 GREAT CATCH — Senior Tamara Huffman made this spectacular, over-the-shoulder catch in last Thursday’s softball showdown in Colfax. Huffman’s grab prevented Elk Mound from scoring a run. The Mounders did go on to win the contest 3-1. —photo by Shawn DeWitt

Huffman opened with a single and Bailey Bradford followed suit. While Huffman was put out on a fielder’s choice off the bat of Irwin, Bradford made her way around the bases and scored on Meredith’s  two-out single.

Unfortunately for the Vikings’ rally, Makayla Mattson hit into a fielder’s choice in the next at bat to end the game.

“We had some amazing plays that saved us runs,” noted Coach Dickinsen.

“Tamara Huffman made a great over-the-shoulder catch and Taylor Irwin put a throw right on the money to cut down what would have been their (Mounders) first run.”

In the end, the Vikings upset bid was foiled by strike outs and lost opportunities.

“We struck out too often and left multiple runners on base,” said Dickinsen.

In the end, Hallum rang up ten Vikings batters on strike outs after allowing eight hits and three walks to get the win.

Buchanan, who also surrendered eight hits, took the loss. She struck out two and walked two in seven innings on the mound.

Bradford and Mattson had two hits for the Vikings while Horel and Cedarblade collected a pair each for the Mounders.

Elk Mound is currently tied with Boyceville for second at 5-2 in the conference and 8-2 overall.

The Mounders traveled to Boyceville on Monday and Plum City on Tuesday and close out the regular season at home against Spring Valley on Thursday.

Colfax is 2-4 in the D-SC and 6-7 overall. The Vikings played in Plum City Monday, hosted Elmwood in a doubleheader on Tuesday and will finish out the regular season at home against Pepin/Alma on Thursday.

WIAA tournament play begins next Tuesday, May 22. Elk Mound will compete in Division 3 and Colfax in Division 4.