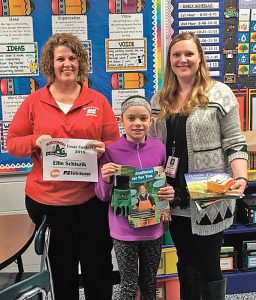 Ellie Schiszik, a fifth-grade student from Elk Mound Intermediate School, was chosen as the Dunn County Farm Bureau winner of the Agriculture in the Classroom essay contest.  Wisconsin fourth and fifth graders were asked to write a 100 to 300-word essay with the theme, “Inventions that have made agriculture great.”

Ellie is the daughter of Mike and Heidi Schiszik.  Mrs. Erin Foiles is her fourth-grade teacher at Elk Mound Intermediate School.

“The reapers was invented in 1830 by Obed Hussey and was patented three years later in 1833. Although Hussey created the first reaper, Cyrus McCormick invented the mechanical reaper in 1831 which was patented in 1834. The reason Hussey created the reaper is because, back then, it took so long to thresh the grain and then tie into bundles. The reaper allowed the farmers to harvest grain in one step. They could feed their families easier, but also make some money too by selling some. This improved farming in a big way.

The first reaper was pulled behind horses. The firs mechanical reaper had a wheel frame projected to the side platform. It contained a cutter bar having fingers through which exchange a driven by a crank. On the outer end of the platform, there was a divider projected ahead to separate the grain to be cut from that to be left standing. A reel was positioned above the platform to hold the grain against the reciprocate knife. This threw it back upon the platfor. The machine was drawn by a team working at the side of the grain.

The modern-day reaper is known as the combine. In 1835, in the United States, Hiram Moore built and patented the first combine harvester. The modern-day reaper looks like a huge machine with a spinning header on the front. This was a huge step in agriculture and was an enormous step for Obed Hussey.” 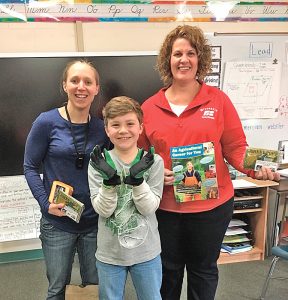 MOUNDVIEW ESSAY WINNER — Peyton Vieth (center) was recognized as the winning entrant from Moundview Elementary school. He was recognized with a certificate of achievement, a pair of John Deere work gloves, Johnny Pop popcorn, and a gift certificate to Culver’s from Dunn County Farm Bureau for submitting the winning essays. He is pictured with his fourth-grade teacher Mrs. Sarah Larson (left) and Kay Gilbertson (right), Dunn County Farm Bureau Promotion and Education Chair. —photo submitted

In addition to the overall winner, Dunn County Farm Bureau recognized Peyton Vieth as the winning entrant from Mound View Elementary school.  The fourth-grader is taught by Mrs. Sarah Larson.  The winning entry from Wakanda Elementary school was Lilly Gregerson and runner up was Mya McMahon. The fourth-graders are both taught by Mrs. Heidi Anderson.

A record number of essays totaling 191 from 3 different schools were accumulated for the competition sponsored by the Wisconsin Farm Bureau Foundation, Insight FS and We Energies.

Farm Bureau’s Ag in the Classroom program provides teachers and K-12 students with an understanding of how their food is produced.  The program seeks to work within existing curricula to provide basic information on our nation’s largest industry:  Agriculture.  Wisconsin’s Ag in the Classroom program is carried out by a network of local educators, volunteers and representatives from agricultural organizations and businesses.  The goal of the program is to help students gain a greater awareness of the role of agriculture in the economy and society, so that they may become citizens who support wise agricultural policies.