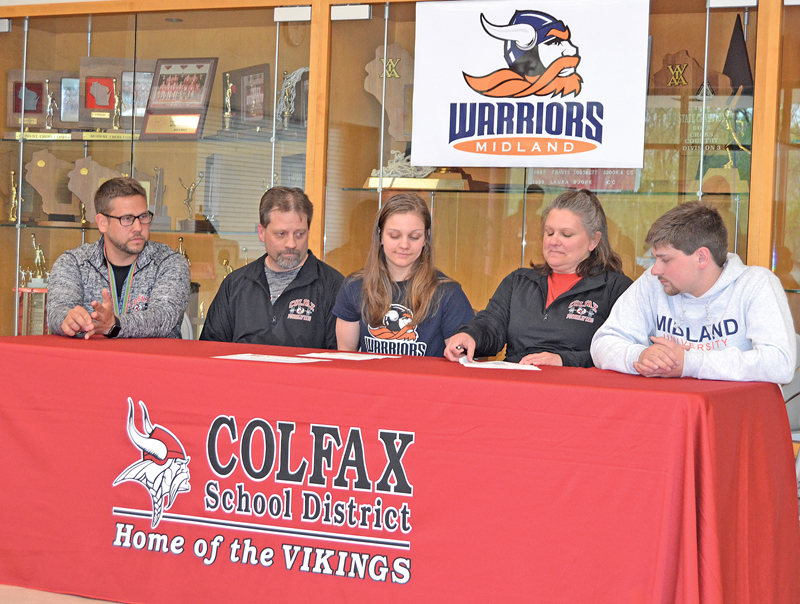 COLFAX  —  Colfax powerlifter Mikaela Leibfried has signed a letter of intent to attend Midland University with a $25,000 per year scholarship.

“Like I’ve told every person I’ve done an interview with about Mikaela, she’s the driving force here. She’s the one who has put in the hard work. She’s the one who is dedicated and has taken it to the next level,” said Matt DeMoe, Leibfried’s powerlifting coach.

Mikaela says she is nervous about going away to college at Midland.

“But everybody says, after Halloween, you’re fine,” she said.

Mikaela’s powerlifting career started when she was in middle school.

“When I was in eighth grade, Coach DeMoe asked me if I would be interested (in powerlifting). He ended up asking me to do squats and asked me if I wanted to join,” she said.

Powerlifting is not yet a Wisconsin Interscholastic Athletic Association (WIAA) sport, but rather, is a club sport at high schools and universities.

At Midland University, however, powerlifting is the institution’s 29th varsity level-sport and is part of the nearly 850 opportunities for students to compete on the college level, according to the university’s website.

“The year before, I only had one powerlifter. It was his idea to start it. I thought, I really enjoy this, so I want to take it to the next step. She was the first one I went to. She was really raw when she started, but I knew she would be strong. We kept working, and her passion for it took her to the next level,” Coach DeMoe said.

“It’s not me versus you, or this school versus that school. We want you to go up there and lift as much as you can. And we’ll see what happens. That’s the best part,” Coach DeMoe said.

“I used to coach football in New Richmond. They started a powerlifting program while I was there. They had six or seven kids the first year. Now they have 80,” he said.

This is DeMoe’s fifth year of coaching powerlifting.

“I did all right as a freshman coming in. But in my sophomore year, I really improved,” Mikaela said.

“In your freshman year, you went to JV nationals. That pushed her to continue,” said Wade Leibfried.

“The secret is you have to work hard. You have to really want to do it. I ended up getting a nutritionist. Nutrition is a big factor,” Mikaela said.

“She does a lot of extra lifting on her own. She goes into Menomonie to the Machine Shed at least twice a week on her own. And she lifts at the school as well. She puts a lot of hours in,” Wade Leibfried said.

“When you get to (Mikaela’s level), it’s so much of a mind game to prepare yourself. What she does in our gym means nothing if she can’t do it at the meet. It’s the mental preparation. Anything that changes, you have to roll with it, and sometimes that’s not easy,” Coach DeMoe said.

“She could have shut it down when she squatted 300 or when she bench-pressed but she didn’t, she got a nutritionist and she took it to the next level. She wanted to be the best. She’s put the time in. She has worked harder than anybody. In a weight-room setting, she has probably worked harder than anyone I’ve worked with in powerlifting,” he said.

Through social media, Mikaela has become aware that other coaches are talking about the Colfax program, so “obviously Colfax (powerlifting) is doing something right,” Wade Leibfried said.

Kim Leibfried noted her daughter has always been “determined” and “dedicated.”

She also noted Mikaela’s older brother, Nate, used to refer to Mikaela as “the runt.”

Being a smaller person, rather than taller, is an advantage in powerlifting, Mikaela said.

“Short people are good (at powerlifting) because we don’t have so far down to go in squat. We don’t have to pick the bar up as far in a dead lift. It’s an advantage to be short,” she said.

According to the Midland website, Midland University has the largest athletic department of any university in Nebraska and recently announced world champion and world record-holder Tim Anderson was hired to coach powerlifting.

“As coach, he was responsible for competition strategy, team selection and overseas travel and training for competitors. Anderson also has earned his USA Powerlifting Senior International coach certification,” according to the website.

Midland University, a private liberal arts college located about 20 minutes from Omaha, was founded in 1883. The university has about 1,400 students, a 10-to-one student to faculty ratio and average class sizes of 18 students, the university’s website says.