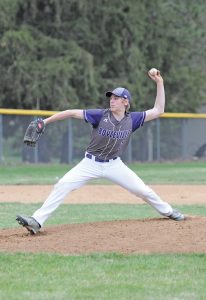 BOYCEVILLE – Three games on the schedule and three wins. The Bulldog baseball team continued their winning ways by defeating Colfax on Monday, May 7th; Spring Valley on Thursday and Pepin/Alma on Friday the 11th.

Boyceville is currently in second place behind D-SC leader Durand. The Bulldogs are 6-1 in conference and 8-3 overall.

Head coach, Michael Roemhild gave credit to the Colfax Vikings saying that they had two good pitchers in Schindler and Polden but goes on to say; “Our bats just got hot at the right time to get a few big hits.” The first time that happened was in the third inning when the Bulldogs put two runs on the board when Bryce Boda and Trett Joles crossed the plate, thanks in part to an RBI hit from Garrett Joles.

The Vikings were the next to get on the board with two runs in the top of the fifth to tie the game.

At the bottom of the sixth with base runners, Cooper Boesl and Jayson Gonzales on second and third, Brendan Sempf came up with a big hit that scored both runners. The Bulldogs now had a 4-2 lead which is the way the game ended.

Coach Roemhild praised Walker Retz for pitching four great innings and for Brady Nye who did well finishing out the game for the Dawgs. Roemhild continues his praises by saying, “I thought Jayson Gonzales played his best game at second and our outfield made some nice plays.”

This was the game that Coach Roemhild has been waiting for all year, the game where all his players came together and produced a fantastic win. “We played a solid conference opponent in Spring Valley and we knew we were going to have to bring our A game.”

The Bulldogs brought their A game keeping the Cardinals of Spring Valley scoreless thanks to the strong pitching of Bryce Boda backed by some great defense. Boda had 7 strike outs and only 2 walks, giving up 4 hits for the game.

The offense started slowly for the Bulldogs as they scored one in the first inning and one in the fourth. Then in the fifth inning with Brenden Sempf on base, Garrett Joles hit a home run to increase their lead to 4-0.

The sixth inning saw one more run on the board for the Bulldogs as Walker Retz crossed the plate. Then in the seventh “we just hit the ball well and were patient at the plate,” commented Roemhild as the Bulldogs added six more runs to win the game 11-0.

As a team the Dawgs only struck out twice. Trevor Hollister went 3 for 4 for the night and had 3 RBIs. Luke Kundtson was 2 for 3 with some clutch hits and a few stolen bases. “I thought we were much more focused at the plate,” stated Roemhild.

On Friday the Bulldogs hosted the Eagles from Pepin/Alma, taking only five innings to clip their wings by a score of 12-1.

After the first inning the game was tied 1-1. But by the third inning he Bulldogs figured out the Eagles’ pitcher and scored five runs. They then added six more in the fourth to take a 12-1 lead. Coach Roemhild commented on the scoring by saying “I thought we had some solid hits. I was most impressed with our base running. We were being aggressive and taking as many bases as possible.”

With the failure of the Eagles to add any runs in the top of the fifth, the Bulldogs were declared the winners due to the 10 run mercy rule.

Roemhild was very impressed with freshman, Walker Retz’ pitching. “I thought this was Walker’s best pitching performance of the year. On top of that our defense played pretty solid behind him.” Retz pitched 5 innings, facing just 19 batters. He struck out 7 and walked only 1.

Offensively Bryce Boda, Brendan Sempf, and Walker Retz each collected a pair of hits while running the bases well. Garrett Joles drove in 2 runs off of a double.

Coach Roemhild recaps the week by saying “We had a goal to go 3-0 this week, and that is exactly what we did. The guys were focused, and really have been improving as the short season has gone by. We scored a total of 27 runs this week while only giving up 3. It is really fun coaching this group of guys. Right now the guys know their roles and are having fun playing some exciting baseball.”

The Bulldogs played at Glenwood on Monday the 14th. They will then host Durand on Thursday the 17th and Shell Lake on the 18th.