HUDSON — Just two days removed from its heart-breaking three-point loss to Spring Valley/Elmwood in the Dunn-St. Croix dual opener, Boyceville was back on the wrestling mats looking to wash away some of the bitter taste of the defeat and move forward.

The Bulldogs found plenty of excellent competition and challenges to occupy their attention at the annual Hudson Dual Tournament on Saturday, January 10.

Boyceville competed against four large schools including a three from Minnesota as well as host Hudson, currently ranked sixth in the latest Division 1 polls.

Boyceville squared off against Hutchinson, MN to open tournament action. Olson noted that Hutchinson, ranked in the Minnesota polls, is a “solid program with tough kids” including a phenomenal  Division 1 wrestler at heavyweight.

“Came up a bit short but thought our kids wrestled well all the way through,” said Olson of his team’s 40-34 loss to Hutchinson in the opening dual.

Jordan Morse and Garrett Joles opened the dual with back-to-back pins for a quick 12-0 Boyceville lead.

But Hutchinson took the next five matches  – four by falls and the other on a major – to vault ahead 28-12.

Hutchinson, however, scored victories in the next three matches including a pin at 138 pounds to forge a 40-22 advantage. Boyceville closed with a pair of pins to make the final 40-34.

Round two opponent Stillwater proved to be the perfect tonic for Boyceville. The Bulldogs won eight straight and nine of the last ten matches for a 47-15 win over the Ponies.

Garrett Joles and Alex Lovett gave Boyceville an early 7-0 lead with wins at 170 and 182 pounds respectively. Stillwater won the next two matches including a pin at 220 pounds to go in front 9-7.

Stillwater received a forfeit at 152 only to have Jordan Morse capped the dual with 48 second pin at 160 pounds for a 47-15 Boyceville win.

Boyceville jumped into the third round and right into the fire as it squared off against the tournament’s top team – Hudson.

The Raiders, fresh off a second place showing at the Bi-State over the holiday break, took 11 of the 14 matches for a convincing 51-12 win.

“They just have athletes all the way through (their line up) and have some big, strong kids,” Olson said.

Wolfe’s 8-5 win was Boyceville’s first of the dual after Hudson opened with five straight wins. James Palmer followed with a pin at 120 pounds and Brock Swenson scored an 8-4 win at 126 to give Boyceville its only wins of the dual.

Although Harding did not have a lot of wrestlers according to Olson, it did have a really tough kid at 120 that is ranked high in state at 120 pounds. In the best match of the dual,  James Palmer prevailed 4-3.

“Overall, it was a good day with some great competition,” concluded Olson.

BV school board approves Spanish trip for June of 2023 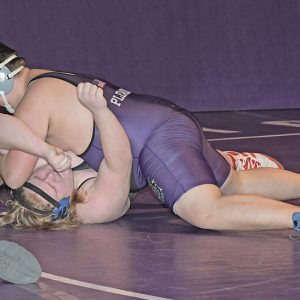