GLENWOOD CITY — Residents were awakened early Tuesday morning by the sound of fire equipment arriving in the city to battle a large fire that struck Glenhaven’s skilled nursing facility.

Fire departments from more than twenty communities responded to the call and Sixth Street and East Oak Street were lined with fire engines, tanker trucks and several support vehicles including several ambulances. Over 100 firefighters were on the scene during the battle.

The Glenwood City Fire Department was paged out about 5:04 a.m. Tuesday, January 14. The report was that flames were showing on the roof of the new building that will be the future nursing home of Glenhaven. The building has been under construction since June of last year.

The first arriving fire personnel reported that flames were high above the two story structure and most of the roof was on fire.

MABAS is a mutual aid system that is designed to connect fire, EMS, special operations, and hazardous material resources to neighboring communities in need.

The construction of the new facility was expected to be completed by this summer and the $9.7 million project was near the half way-point. To quill the flames a large amount of water was directed into the burning structure from large mounted nozzles and three ladder trucks that dumped thousands of gallons of water on the flames.

This amount of water usage overwhelmed the City’s water system and pumpers were removed from the fire hydrants and water was trucked from Tiffany Creek to supply the water needed to fight the flames. By 10 a.m. in the morning the flames were under control and the mop up of remaining fire spots was underway.

No injuries were reported in fighting the fire. The present nursing home of Glenhaven was not involved in the fire and no residents had to be evacuated. The lobby of Glenhaven was used to feed the firefighters and allow them to come inside to warm up and have a cup of coffee. 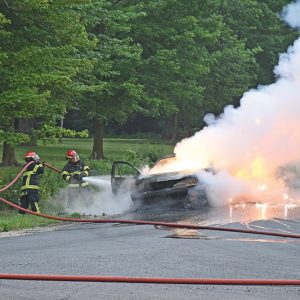