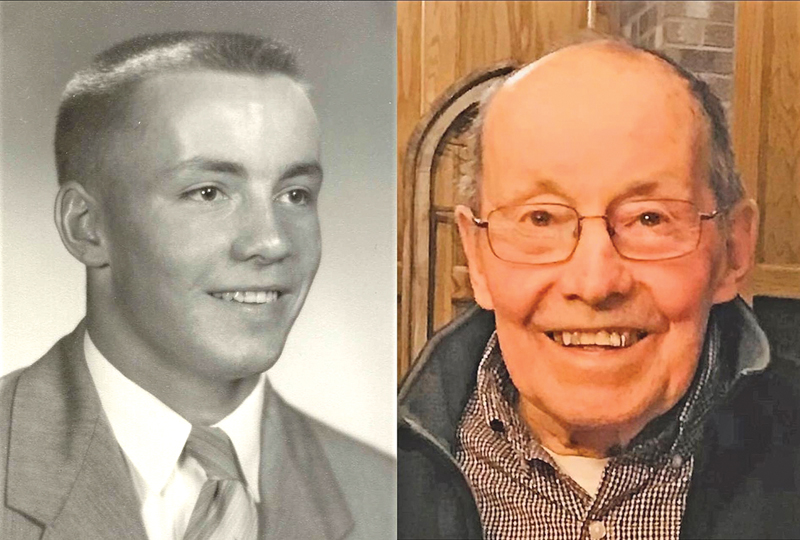 Allen Erhart Wienke, age 84 of Clear Lake, WI, passed away on January 20, 2022 at the Golden Age Manor Nursing Home in Amery, WI where he became a resident after a fall in December 2021.

Allen Wienke was born on June 25, 1937 in Forest Township, WI son of Erhart and Katherine (Gerber) Wienke. He was the third born of 5 children to the Wienke family. Allen grew up in Forest Township, was baptized at St John’s Lutheran Church and attended Woodland Country School, Clear Lake High School, and the University of Wisconsin River Falls for his education.

As a young boy, Allen enjoyed working on the family farm. He also played baseball, basketball, and his favorite, football in high school, all on winning teams. Allen went on to play football at UW-River Falls and was co-captain his senior year when the team won the conference championship in 1958.

Allen married his high school sweetheart Karen Fox on September 4, 1959 at First Lutheran Church in Clear Lake, WI. He was also enlisted as a member of the U.S. Army Reserves during this time. Allen pursued his passion for the land and animals by working as a high school Agricultural/Industrial Arts teacher in Prescott, WI for 5 years. Allen and Karen then became the owner/operators of a dairy farm in Forest, WI from 1964 to 2019. He was nominated and placed runner-up for Outstanding Young Farmer by AMPI. During that time they also raised three children: Nathan, Tim, and Heather. Their son Nathan passed away tragically in an accident in 1984. Allen and Karen retired, sold the farm, and moved to an apartment at Ridgeview Apartments in Clear Lake in 2019. It was always hard for Allen to leave the farm but he had no hesitation when it involved his family.

Allen loved his family and was proud of each and every one. It was his joy to spend time with his children and grandchildren, and he prayed for them daily when he and Karen spent time together reading the bible. Allen had a strong Christian faith and was a member of the Living Word Church in Forest, WI. He served his church by helping wherever there was a need; mowing the lawn, plowing snow, planting flowers, etc. He was also a deacon, an elder, and spent many years teaching Sunday school. Allen and Karen led a ministry for the residents at Glenhaven and held church services on Sundays for several years. He became an avid runner in his 50s and competed in countless local 5k races, eventually working his way up to Half Marathon distances.

Allen also felt strongly about serving his community and served on a number of boards. He was an AMPI delegate, school board member, and was on the Planning Commission for Forest Township along with serving on the board of the Farm Bureau. Allen was also active in the Republican Party serving as an organizer and a delegate. He will be sorely missed by his family and many friends.

Visitation was from 3 – 6 p.m. on Sunday, January 23, 2022 at the Scheuermann-Hammer Funeral Home in Clear Lake, WI and one hour before the service at Living Word Church on Monday. Burial will be at the Clear Lake Cemetery.