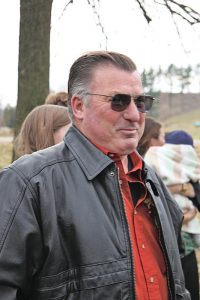 Robert Charles Quinn, age 76 passed away Friday December 31, 2021 in his home with his devoted wife Dixie Quinn of 59 years.

He was born on January 29, 1945 to parents William Sr. and Golden Quinn. Robert was one of eight children. He grew up in “Quinn Valley” in Knapp, Wisconsin. Robert began his work career at the Knapp Creamery at age 15, followed by Norlake, and then 30 plus years at Andersen Windows.

Robert was known to many as Charlie or Bob. His favorite name was always Grandpa. Robert had many passions including cutting wood and lawn care. Robert took pristine care of his vehicles including his 5+ John Deere lawnmowers, his 1989 Mercury Marquee, and his 1975 Ford F250. Robert was always good for a laugh or a prank. He loved to visit over a cup of coffee and his favorite Little Debbie sweets.

A Celebration of Life will be Saturday, January 8th, 2022 from 10 a.m. to noon at 810 1st street (Former Jehovah Witness building), Glenwood City, WI. Service at noon, luncheon to follow on site.

Anderson Funeral Home of Glenwood City is assisting the family with arrangements.