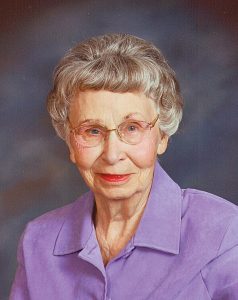 Margaret was born on the family farm in Maxville Township, Buffalo County.  She was the daughter of August and Mary (Schlosser) Prissel.  Margaret had a love of education.  She learned to read by age four and after six years of grade school went on to attend high school in Durand.  She continued her love of education, earning a teaching degree from UW Eau Claire.  Margaret started teaching at the age of 17 in the one-room schools of Oak Hill and Walker’s Corner in rural Buffalo County.

She married Harold Poeschel at St. Mary’s Catholic Church in Durand.  They raised five children and were married for more than 63 great years.  Together they owned and operated family farms, first in Buffalo County and then in Dunn County, for over 50 years.

Margaret continued her college education while teaching, taking care of her family and farming. She received degrees from UW Eau Claire and UW Stout.  Margaret was an elementary teacher for over 36 years and taught in the Boyceville School District for the majority of her career.   Margaret enjoyed her time teaching, traveling, taking walks, painting, golfing, dancing, being at their cabin and especially spending time with family and friends.

Due to Covid-19, private funeral services will be held.  Burial will be at St. Joseph’s Cemetery in Menomonie.

The family would like to express their thanks and appreciation to everyone that has helped Margaret over the years, and a special thank you to The Neighbors of Dunn County and Hospice for the kindness and care that was given.

Memorials can be made to Stepping Stones of Dunn County (1620 Stout Rd. Menomonie, WI 54751) or the charity of choice.

Condolences may be made online at www.rhielfuneralhome.com

Rhiel’s Funeral Service of Menomonie is serving the family.