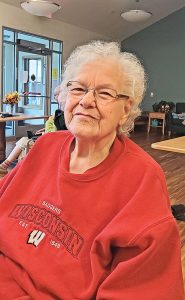 Betty Mae Steies, age 88, formerly of Downing, WI went to heaven to be with her husband John on January 3, 2021 at The Neighbors of Dunn County in Menomonie, WI surrounded by her family.

Betty married John Steies April 30, 1949 and lived in St. Paul, MN. Because of John’s work in bridge construction they would pack up the trailer with the older children. Where they spent time in Spooner, Osseo, Clintonville, Stanley, Abbotsford, and Medford, just to name a few. Finally they would be able to settle down in Downing, WI in the early 1960s. Where she resided until 2016 when moved into assisted living.

Betty held many jobs over the years, from babysitting, housekeeping; She worked for Sanna Dairies, Glenhaven, and Glenwood Broom CO. Betty was the proudest of the 18 years in the Glenwood City School district where she served in the kitchen and the laundry room.

She enjoyed decorating cakes for family and friends for weddings, birthdays or any celebration. She and John enjoyed traveling with friends Verlon and Thora Voeltz, and family.

Betty is preceded in death by her parents, husband, John, brother Herbert and sister Arlene Parent and niece Shelley Hanson.

She is further survived by many nieces, nephews, other relatives and friends.

A Funeral service will be held at 11:00 a.m. on Friday, January 7, 2021, at Trinity Lutheran Church in Boyceville, WI with Reverend Bradley Peterson officiating. Burial will be in the Mound Cemetery, Downing, WI. Friends may call at the church one hour prior to service.

The Anderson Funeral Home in Glenwood City is assisting the family.