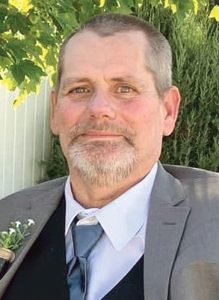 Randy J. Larson, age 55 of Colfax, was called home by God on November 30, 2021 surrounded by family while at Luther Hospital after a long hard fought battle with cancer. He was born on March 10, 1966 to Orville and Faith (Snyder) Larson. Randy married Peggy Johnson on October 10, 1992.

Randy was a beloved husband, father, Papa and son.  He loved his family; they were the most im-portant thing in his life.  Then came his passion for hunting and fishing. Randy was a hard worker and had a career he loved in construction and later built their family home. He never lost his sense of humor and was always making sure that there was laughter in the home.

A funeral service for Randy will be held at 3 pm on Saturday, December 4, 2021 at Sampson Fu-neral Home in Colfax with Pastor Jordan Herrick officiating. Visitation will be held from 1-3 pm until the time of the service. Inurnment at Evergreen Cemetery will follow.

Randy’s family would like to express their deep appreciation to Dr. Michael Yaszemski and his nurses in Rochester, MN and for the staff at Mayo Hospice and Luther Hospital for all the won-derful care that was given to him. Randy’s family is finding great comfort in knowing he is now pain free and in God’s loving arms.