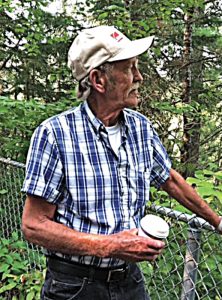 Dennis E. Wold, “John Deere Denny” 81, of Connorsville, WI. Passed away on November 29, 2021, at Regions Hospital in St. Paul, MN, after a short battle with emphysema and COPD.

Dennis was born on October 6, 1940, in New Richmond, WI, to Elmer and Evelyn (Moen) Wold. He graduated from Boyceville High School in 1958. Dennis married Darlene Toy on October 3, 1959, from this union he was blessed with 5 children; John, Jeff, Gerald, Richard, and Denise. Dennis later married Lorna Sloan and they made their home in Connorsville.

Dennis was a gifted carpenter and mason; There are many homes in the Dunn and St. Croix Counties that are held together by his work. He had a passion for John Deere tractors of all sizes. He restored many tractors and threshing machines over the years, but his favorite color was green.

Sister Annette Dahl, brother Barry (Karen) Wold, and his furry buddy Brutus. He is further survived by nieces, nephews, other relatives and friends.

Dennis is preceded in death by his parents, wife Lorna, brother Larry, brother-in-law David, and step-children Dennis, Carl, and Peggy.