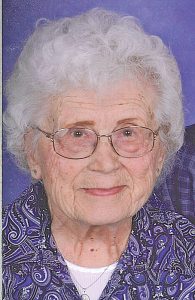 Vernoid retired June of 1985. They sold their house in Shawano and moved to their lake home in Chetek, Wisconsin.  During retirement they traveled the USA in their camper. They also traveled to Norway, Denmark, Sweden, Switzerland, Alaska, Hawaii, Panama Canal, and went on several cruises.  They spent 20 years in their winter home in Arizona, enjoying their time with good friends and relatives. Her and Vernoid were very active the different churches they belonged to.

A Funeral Service will be held at 10 a.m. on Saturday, December 11, 2021 at Sampson Funeral Home, 1017 E. Railroad Ave., Colfax with Pastor Guy Redfield and Vicar Chuck Shingledecker officiating. Visitation will be held from 4:30 p.m. to 7 p.m. on Friday, December 10, 2021 at the funeral home, and again one hour prior to the service. Burial will be held in Holden Lutheran Church Cemetery, Grant Township.

Sampson Funeral Home is assisting the family. Online condolences may be expressed at www.sampsonfunerarlhome.com.