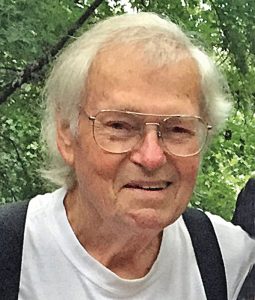 He grew up in Colfax, WI, and graduated from Colfax High School before attending the University of Wisconsin–Madison. Shortly after he started college he was drafted into the U.S. Army. Upon his return he earned his Bachelor of Science degree in Electrical Engineering, and in 1956 married the love of his life Nancy Scheurman. After graduating he worked for FabriTech, Inc. in Amery, WI, designing core memory systems. The company sent Walt and his family to Scotland for 2 years, to open a new branch office in Glasgow, where they lived and traveled Europe. Once they returned from Scotland Walt began working for Display Systems, Inc. where his work earned several patents. He started his own business in the early 1970s, called Circle 4 Electronics, Inc. designing and building electronic anti-tip over safety systems for large cranes. He later designed and manufactured gas pump control systems for gas stations, as the self-service trend began.

Walter was known for his sharp engineering mind, amazing memory and was always busy with innovative projects. He held several patents at various companies during his career. He absolutely loved his lakeside property in Amery and his home in Hudson, which he designed and built in 1970, and named “Vikedahl House” after his ancestral name. His passion was tinkering with tools and electronics at “The Building” and used his orange “Mr. Kabota” tractor to do things 87-year-olds would not otherwise be able to do! He and Nancy also loved music and were season ticket holders of the St. Paul Chamber Orchestra. But, what he loved most was spending time with his beloved wife of 65 years and family including the family dog.

He is preceded in death by his parents, and siblings Herman Weeks, Shirley Quig, and Chloris Rowlette.

A funeral service for Walter will be held on Saturday, December 4, 2021, at Mt. Zion Lutheran Church in Hudson, WI. Visitation will be from 12 p.m. – 2 p.m. with a service starting at 2 p.m. Masks will be required at church.