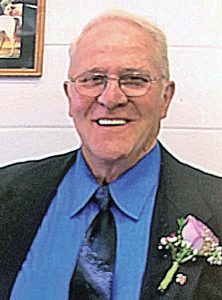 Roger was born on October 10, 1935, to Clara & Lawrence Stansbury on a farm in Town of Sheridan in Dunn County near Vanceburg, WI.

Some of his favorite memories are waiting for the older kids to come home from school in Vanceburg and sneaking over to the neighbor’s place for strawberries. Roger literally walked uphill both ways to school. He moved to the Downing, WI area at the age of 6 and went to Best-Valley School till 2nd grade. Then he started school in the 3rd grade at Bolen School. Later he moved to a farm near Connorsville, WI. He attended Glenwood City High School and graduated in 1953. He married his high school sweetheart Helen Burmester in 1955 and they had 10 wonderful children.

He farmed while also working first at the Ford Motor Company in St. Paul and then later at Doboy in New Richmond, WI. During this time, he also took courses at UW-Stout and WITC in New Richmond. He transitioned to full-time dairy farming in 1974. He retired from farming in 1990, at which time he became a school bus driver for the Boyceville School District where he was a terrific positive influence for the children that rode his bus until he retired in 2010. He was invited to many graduation parties from kids on his bus route and really missed his kids after he retired.

Roger had strong Christian faith which he modeled in his daily life. He was very active in his church as a Sunday School and Vacation Bible School teacher and was on several committees and councils.

Roger was an avid outdoorsman who loved hunting, fishing and exploring in the woods.  He had a great mechanical aptitude and could diagnose and fix almost anything. He spent numerous hours creating projects in his woodshop including cradles, cedar chests, trunks and many other personalized items for his family.

Roger and Helen both shared their love of music playing the harmonica, piano, guitar, violin and accordion at many church events and other occasions. They participated in many music jams over the years, including in 2016 at the Hootenanny at Dornan’s in Jackson Hole, Wyoming which afterwards they received a standing ovation.

Roger loved his family deeply and cherished the many great memories enjoyed with them. He enjoyed conveying his wisdom via the many stories he told.

Services will be held on Saturday, November 27, 2021 at 11:00 a.m. at Immanuel Evangelical Lutheran Church 2526 – 80th Ave Woodville, WI with Pastor Wayne Hilgendorf officiating. Visitation will be held  prior to the funeral at the church from 9-11 a.m. Masks are required. Internment ceremony will be held a later date.